Samuel Kenyon
It seems like all human babies go through the exact same intelligence growth program. Like clockwork. A lot of people have assumed that it really is a perfect program which is defined by genetics.

Obviously something happens when a child grows. But surely that consists of minor environmental queues to the genetic program. Or does it?

Consider if the "something happens as a child grows" might in fact be critical. And not just critical, but the major source of information. What exactly is that "nurture" part of nature vs. nurture?

What if the nurturing is in fact the source of all conceptual knowledge, language, sense of self, and sense of reality?

In the book The First Idea, Greenspan and Shanker claim that language and intelligence development in human children has a prerequisite of interactive emotions. Their evidence is primarily with the treatment of abnormal children. Supposedly no human child can achieve anything like standard human intelligence or language without going through specific levels of interactive emotional experience (I introduced these levels in a previous blog post, Emotional Developmental Symbol Creation). 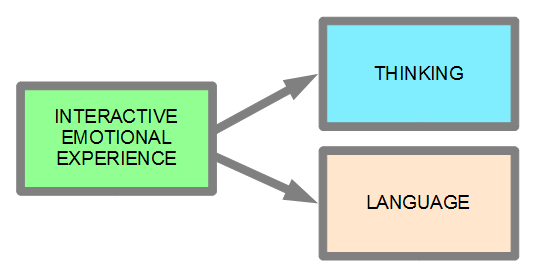 Interactive emotional experience is not just development precedence. It's also the foundation of the architecture of the mind, at least as far as grounding symbols. This type of mental symbol--and having a lot of them generated during development--is required for meaning and language, according to Greenspan and Shanker.

But why isn't it enough to just separate action from perception to get a symbol and ground it some other way? In other words, are all concepts grounded--if you go down enough--with an emotionally-linked symbol?

Greenspan and Shanker also point out the important development of conversation skills. Normal people like dialogue. They like reading it and they like hanging out and chatting with fellow humans. If you, gentle reader, do not like conversing with other humans, then you may want to consider how normal your upbringing really was. The human rhythmic capacity seems to be developed during infant-caregiver interactions. That's certainly easy to believe, but is it fundamentally tied into emotions? From their examples, it would seem that emotional interactions are the enabler. Likewise with planning and sequencing abilities. The key thing there, I think, is that emotional interactions enable the development--the mechanisms for planning and conversations--even if the concepts are eventually divorced from the childish emotional links.

What of the basic mental symbols--the foundations of knowledge, understanding, ideas, imagination, and language? Are all of them linked to emotions, and specifically those emotions involved with infant-caregiver interactions? Or are the emotional interactions merely correlations? I suspect that given the evidence with abnormal children, perhaps the emotional grounding is at least one kind of grounding. It remains to be seen if that is the basis of all other symbols or is in fact parallel to other mechanisms.
In the Eye of the Brainstorm
More Articles All Articles
About