Samuel Kenyon
At the AAAI 2013 Fall Symposia (FSS-13)12, I realized that I was not prepared to explain certain topics quickly to those who are specialists in various AI domains and/or don't delve into philosophy of mind issues. Namely I am thinking of enactivism and embodied cognition. 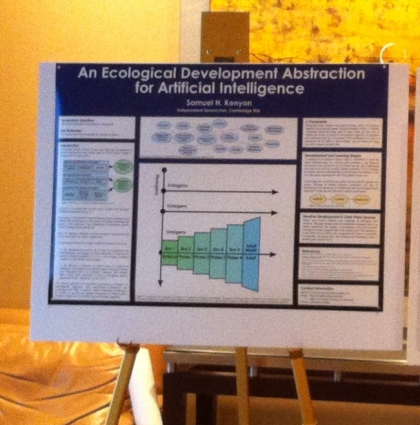 But something even easier (or so I thought) that threw up communication boundaries was The Symbol Grounding Problem. Even those in AI who have a vague knowledge of the issue will often reject it as a real problem. Or maybe Jeff Clune was just testing me. Either way, how can one give an elevator pitch about symbol grounding?

So after thinking about it this weekend, I think the simplest explanation is this:

Symbol grounding is about making meaning intrinsic to an agent as opposed to parasitic meaning provided by an external human researcher or user.

And really, maybe it should not be called a "problem" anymore. It's only a problem if somebody claims that systems have human-like knowledge but in fact they do not have any intrinsic meaning. Most applications, such as NLP programs and semantic graphs / networks, do not have intrinsic meaning. (I'm willing to grant them a small amount intrinsic meaning if that meaning depends on the network structure itself.)

Meanwhile, there is in fact grounded knowledge of some sort in research labs. For instance, AI systems in which perceptual invariants are registered as objects are making grounded symbols (e.g. the work presented by Bonny Banerjee). That type of object may not meet some definitions of "symbol," but it is at least a sub-symbol which could be used to form full mental symbols. 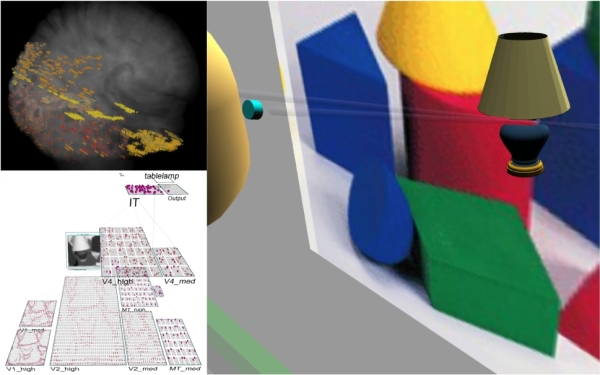 Image from Randall C. O’Reilly, Thomas E. Hazy, and Seth A. Herd, "The Leabra Cognitive Architecture:
How to Play 20 Principles with Nature and Win!"

Randall O'Reilly from University of Colorado gave a keynote speech about some of his computational cognitive neuroscience in which there are explicit mappings from one level to the next. Even if his architectures are wrong as far as biological modeling, if the lowest layer is in fact the simulation he showed us, then it is symbolically grounded as far as I can tell. The thing that is a "problem" in general in AI is to link the bottom / middle to the top (e.g. natural language).

I think that the quick symbol grounding definition above (in italics) is enough to at least establish a thin bridge between various AI disciplines and skeptics of symbol grounding. Unfortunately, I also learned this weekend that hardly anybody agrees on what a "symbol" is. 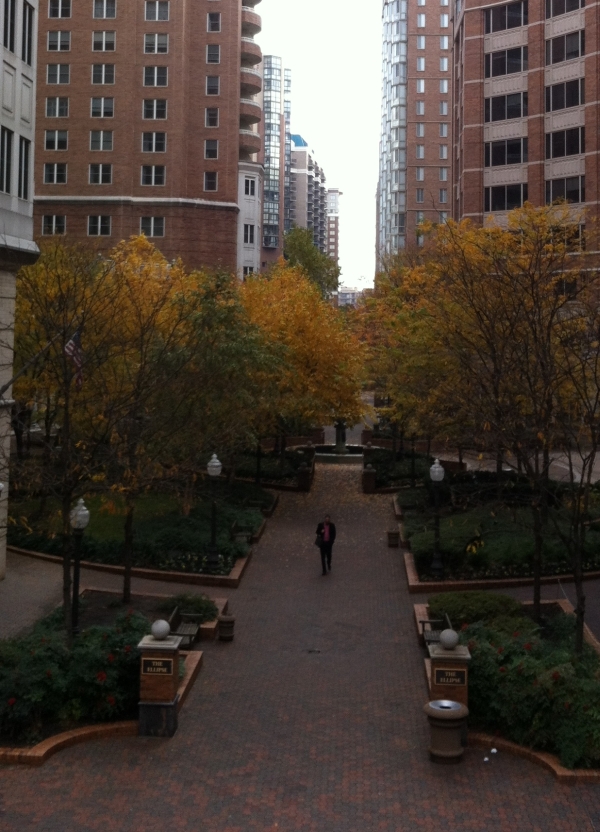 Photo taken from the Westin hotel. I just noticed that Gary Marcus snuck into my photo.

Gary Marcus by some coincidence ended our symposium with a keynote that successfully convinced many people there that symbolic AI never died and is in fact present in many AI systems even if they don't realize it, and is necessary in combination with other methods (for instance connectionist ML) at the very least for achieving human-like inference. Marcus's presentation was related to some concepts in his book The Algebraic Mind (which I admit I have not read yet). There's more to it like variable binding that I'm not going to get into here.

As far as I can tell, my concept of mental symbols is very similar to Marcus's. I thought I was in the traditional camp in that regard. And yet his talk spawned debate on the very definition of "symbol". Also, I'm starting to wonder if I should be careful about subsymbolic vs. symbolic structures. Two days earlier, when I had asked a presenter about the symbols in his research, he flat out denied that his object representations based on invariants were "symbols."

So...what's the elevator pitch for a definition of mental symbols?

Notes
1. My specific symposium was How Should Intelligence be Abstracted in AI Research: MDPs, Symbolic Representations, Artificial Neural Networks, or _____?.]
2. You can read my paper An Ecological Development Abstraction for Artificial Intelligence and the poster.
In the Eye of the Brainstorm
More Articles All Articles
About