Home > Science & Society > In the Eye of the Brainstorm

Ripping off the heads of robots like a sweaty space-age cyberpunk Robin Hood, Matt Damon is delivering future-social-justice this week in Elysium.

Alright, so what does this have to do with anti-science-fiction? As Britt writes:

But the vast majority of science fiction films—even the very best of them--still see the SF, the tech, the speculative concept, as the antagonist of the film.

And that is the heart of the matter. As he says about Elysium:

Elysium could have been poised to change that simply by virtue of the fact Matt Damon is using an SF creation--a super-powered robot exoskeleton--to fight science fiction: a space station dream paradise which allows the rich to forget about the rest of us. This is a gorgeous set-up, but it's all there is: then it becomes every Iron Man, two guys in super-powered suits hitting each other. 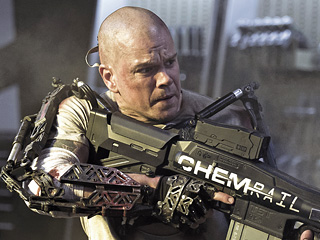 I've noticed these unsettling, often grotesquely simplified, anti-technology displays myself; my only disagreement with Britt is his claim that this is a recent phenomenon. I kept a list several years ago of science fiction all films involving artificial intelligence and/or robots. The list was intended to span all decades of film. There were two categories of how a piece of technology was used in the narrative: in a positive role to humankind or the universe, or in a negative role. It seems to me that film has always had a mix of thoughtful future building vs. the future as an enemy. The list is pasted below.

Britt also ignores recent films which in the future tech was not evil (or at least not the only evil). The first Iron Man movie contains one of the best film depictions of engineering development, but apparently all Britt noticed was guys in super-powered suits hitting each other. Aren't there any films recently that are "serious" about science and/or technology? Of course there are, such as Computer Chess. Indeed, Britt mentions others such as Moon. So the real problem is revealed--it's not that thoughtful and pro-tech films don't exist anymore, it's just that they are "in the shadow of" bigger budget efforts.

Point of No Return

Although many standard plots include a point of no return for the main character, the fictional world itself can return. Science fiction is best when the world is changed--and never goes back. A lot of science fiction films cheat us by going back to normal at the end. That is the one major infraction of most of Michael Crichton's techno-thrillers.

Note this has not been updated since 2005. It should probably also include artificial creature films such as The Golem and Frankenstein.

In a positive role to humankind or the universe:

In a negative role to humankind or the universe: