Samuel Kenyon
A day after its release, I strolled into the Harvard Co-Op bookstore and read most of Ray Kurzweil's new book, How to Create a Mind: The Secret of Human Thought Revealed. I then quietly placed it back on the shelf and wandered out of the store in a state of wonder. Wondering, that is, if Kurzweil was going broke and this was a last ditch attempt to make some cash. 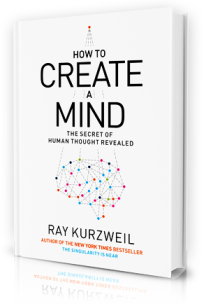 Don't get me wrong. I like Ray Kurzweil. I have met him and I have attended many of his public presentations. He used to be a decent writer (last century). And I am a transhumanist, although not a Singularitarian.

And one of the advanced praisers of Kurzweil's new book, Marvin Minsky (also mentioned in the book), has had some influence on me via his Society of Mind / Emotion Machine class that I took and reading his books. And I've met, worked for the company of, and volunteered for the educational program created by another advanced praiser, Dean Kamen.

So, with a quantum of respect and the intention of feedback for future improvement, I declare the book How to Create a Mind to be a needless trite pile of vomit.

What is the Point of this Book?

The point of this book is apparently for Kurzweil to establish himself as an artificial intelligence expert. Perhaps a second, more admirable, goal is to inspire the accelerating growth of intelligent technology that he predicts.

Oh, and what is the overall theory? It's basically the same as Jeff Hawkin's approach of Hierarchical Temporal Memory (HTM). Like Hawkins, Kurweil also claims this is a biomimetic approach, focusing only on the neocortex, and within the neocortex only on cortical columns.

Instead of merely writing his Hawkins-esque theory in a twenty page paper, he has graced the world with a full book by filling in the theory with a bunch of autobiographical stories, juxtapositions of computer science successes like IBM's Watson, and stuff from his previous books.

I wonder if people who buy this book, and also the HTM cult members, have actually thought from a more systematic point of view.

I suspect people are going with a fictional concept of a "brain in a vat" or the disembodied big computer that somehow can think exactly like a human.

But HTM and Kurzweil's new book are really very narrow approaches and don't say anything about how to actually make a mind, which is to say how to make a system. And what, exactly, does that system do? What range of environments and interactions is a given system capable of?
In the Eye of the Brainstorm
More Articles All Articles
About