Samuel Kenyon
I just attended Stephen Fry's acceptance of the Outstanding Lifetime Achievement Award in Cultural Humanism, given by the Humanist Chaplaincy at Harvard.

His speech was quite different than the one he gave for the Intelligence² Debate.  The main theme tonight was "I will not be told."

To be told is to wallow in revealed truths.  Bibles and similar religious texts are all about revealed truths which cannot be questioned, and the origins of which require the readers to make many assumptions.  And it was even worse in the dark times of religious book control and illiteracy in which you might not even be allowed to read the book--you have to get the mediated verbal account from someone supposedly holier than you. 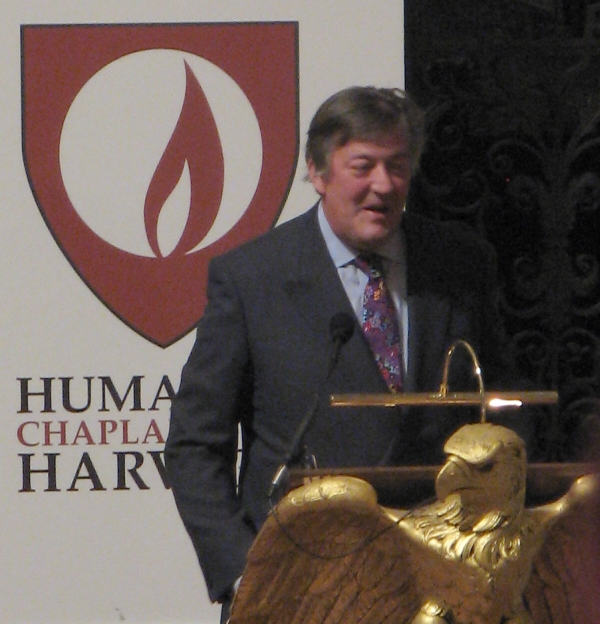 Discovered truths, on the other hand, are not told.  Of course somebody could tell you a discovered truth, but if you don't trust them you can question it.  Discovered truths are can be discussed.  They are questioned and tested.

Fry suggests humility before facts--reason or sounding reasonable is not enough.  Back to question and test. And so on.

Stephen Fry then fumbled through a quick version of history to describe how the Greeks had some free inquiry and attempts to discover truth around 2000 years ago, but that was almost extinguished for 1500 years by the Christians.  But not all hope was lost, and then the Enlightenment brought discovered truths back into action.  Science kicked into gear, the United States was born, and so on.

Later on, Fry was discussing Oscar Wilde's adventures--somewhat like the Beatles, Wilde was not well known in England and then burst onto the scene in America in large part just by being an interesting character.  When somebody asked him how America, born from the greatest ideals of freedom and reason, could have disintegrated into the Civil War, Wilde responded that it's because American wallpaper is ugly.

The concept is that violence breaks out when people have no self worth because, which in turn is assisted by ugly artificial habitats.

Stephen Fry says how he used to see posters of Che and Marx in college dorms mixed in which pictures of John Lennon and Jimi Hendrix.  People thought that revolutionary politics and rock music could change the world for the better.  But they can't.  The posters he prefers to see on people's dorm walls are Einstein and Oscar Wilde--the life of the mind instead.  Fry then said something about the Oxford way to "play gracefully with ideas."

Stephen Fry tells us (note this is not verbatim): "It's not humanists' job to tell religious people they are wrong. However," and there is a pause as the crowd laughs, "it is none of their fucking business to impose their revealed truth on the wonderful world of doubt."

Amidst anecdotes of Oscar Wilde, Fry repeatedly asserted his second theme, which is that humanists should not tell other people how to live.  In fact, he accepted the award on the condition that the Humanist Chaplaincy would not try to convert religious people and smugly tell them they are wrong.  It's all about showing vs. telling.

The high point of the question and answer session, which Fry compared to a KGB interrogation, was a serenade by a young lady with a ukulele, in which she offered the homosexual actor her baby-making apparatus in no uncertain terms.  "I have all the tools that you require to breed / So send along your seed." 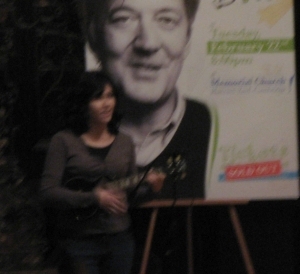