Samuel Kenyon
Gamification is a topic I have mentioned not too long ago (see this post). Recently I attended a Boston CHI presentation by Chris Cartter called "The Socialization and Gamification of Health Behavior Change Apps."

One thing that Cartter said that sounds right, and may resonate with some of my readers, is that games are fuzzy, not perfect sequential processes. And that is what health behavior changes are more like.

So gamification in this area might actually result in better methods than old fashioned x-step procedures.

Cartter works for a Boston company called MeYouHealth, which is cranking out these well-being apps for the iPhone. Largely the games use a concept of small action--little by little a specific goal is approached.

As indicated by the title, the other major aspect of Cartter's presentation is the social network links. Hopefully Boston CHI will post the video eventually, but basically there are lots of social graphs which can indicate interest things such as self emergent groups and individuals who are catalysts and how new members integrate into groups, and stuff like that.

The support of friends can be used effectively to change unhealthy behavior. Cartter previously worked on a successful friend network website for quitting smoking called QuitNet. MeYouHealth has largely been using Facebook's graph so far, but that could change in the future. One can now connect with others in the MeYouHealth space without Facebook. Obviously there could be some differences with communicating issues with existing friends as opposed to making new online friends who are struggling with similar problems.

Here is a screenshot of MeYouHealth's Facebook app Super Friends, which gives you an interactive social graph image. "Super friends" can also be shown, which are those who connect you to the most others. This is from running the app on my own FB account. My super friends were DJs. 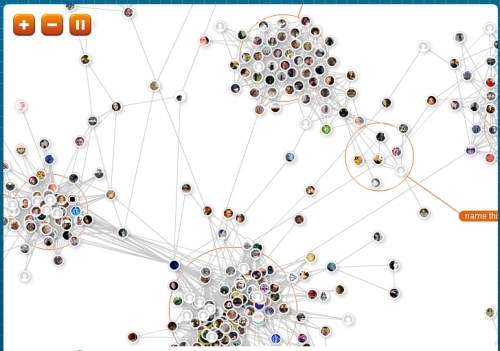 The health aspect here is written right in the app:

Your relationship with your friends don't just affect you socially - they affect your health as well. If a friend of yours becomes obese, your other friends who don't know you obese friend are more likely to become obese.

Credit is then given to the book Connected, by by Nicholas Christakis and James Fowler.

Another Boston company, RunKeeper, has had explosive growth during the past two years. They have six million people on their own social network, Health Graph. They have opened it up with an API so other apps and products can tie into it. It will be interesting to see which health social graphs will prevail (or get bought out). 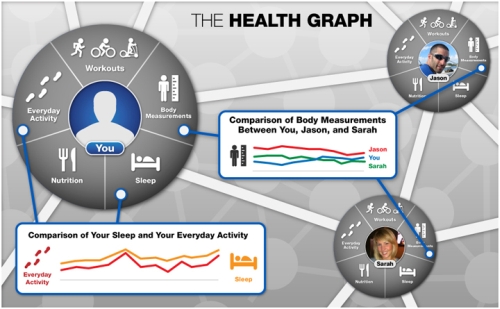 MeYouHealth was assembled to explore and/or perhaps create the well-being niche of mobile apps for well-being tracking and behavior change.

If you are curious, you can take their well-being quiz online here. They've evolved the question set down with statistics. So questions that you might expect like "Do you smoke?" are not even asked.

But how do we know that is telling us our well-being? What is well-being? Here is the definition from their website:

Healthways Well-Being Index (WBI), a national survey that provides a comprehensive, real-time look at the U.S. public’s health and well-being. The WBI is based on telephone interviews with at least 1,000 U.S. adults each day. Over one million people have been surveyed since the survey’s launch in 2008, making it the nation’s largest and most comprehensive look at overall well-being.

Although an accurate description of a population's well-being, the WBI was not designed to predict the well-being of an individual. Healthways, the parent company of MeYou Health, partnered with leading behavioral scientists to create an assessment tool for individuals, the Well-Being Assessment (WBA), which it administers to employers, health plans and other organizations. MeYou Health has adapted the WBA for online use and is presenting it here as the Well-Being Tracker.

It would seem the definition of well-being here is circular: well-being is based on the WBA, and the WBA was made to assess well-being.

But Does It Matter?

I suspect there must also be a balance between choosing to use a gamified process because you think that might be a fun and effective way to accomplish a real life change vs. becoming addicted to apps arbitrarily because that is the nature of games.

And one aspect of games that is specifically exploited here is the social network integration. So I see at least three factors to keep in mind:

So far, it's looking a little bit better than the future shown in the movie Demolition Man. Be well, gentle reader.