Second-hand smoke, also known as environmental tobacco smoke or ETS, is clearly associated with cancer, respiratory and cardiovascular disease in humans. Several studies have shown that up to 20 different carcinogens contained in tobacco smoke can be inhaled by non-smoking bystanders.

Dr. Timothy Fan, veterinary oncologist at the University of Illinois Veterinary Teaching Hospital in Urbana, explains that although associations between ETS and diseases in animals have not been as extensively researched, a handful of studies show a correlation between ETS and certain forms of cancer in pets.

Cats living in homes where people smoke cigarettes are more than twice as likely as other cats to acquire a deadly form of cancer known as feline lymphoma, according to a first-of-its kind study in cats conducted by scientists at Tufts University School of Veterinary Medicine and the University of Massachusetts.

The study, entitled "Environmental Tobacco Smoke and Risk of Malignant Lymphoma in Pet Cats," was published in the American Journal of Epidemiology. The authors conclude that these findings offer a compelling reason for further study of the relationship between passive smoke and non-Hodgkins lymphoma in humans, which is similar to lymphoma in cats.

A drug commonly used to treat severe acne can lead to depressive behaviour in mice, according to research published in the journal Neuropsychopharmacology.

Since the drug’s introduction in the early 1980s there have been controversial reports of depression and suicidal behaviour that may have occurred in some people taking Roaccutane (Accutane in the US).

This has led to the drug’s manufacturers, Roche, including a warning in the product information that taking the medication may cause depression, psychosis and suicidal behaviour.

As a younger man, I was a big fan of Greenpeace.

As time went on, I thought they lost their focus by branching out from protesting nuclear weapons to whaling and trees and basically hanging out a shingle that said, "If you send us money, we will protest for you."

Electrical deep brain stimulation can dramatically alleviate depression that is resistant to other treatments, researchers have found in an initial study on six patients. The finding is important, they said, because up to 20 percent of patients with depression fail to respond to standard treatments--requiring combinations of antidepressant drugs, psychotherapy, and electroconvulsive treatment (ECT) that still may fail. The number of resistant depression patients can be large, since depression is the leading source of disability in adults under age 50 in North America.

Researchers at the University of Toronto and The Toronto Hospital have discovered a biological basis for the phantom sensations that are frequently experienced on the missing limbs of amputees. The findings of the study are published in the Jan. 22 issue of Nature.

The researchers found that the neurons in the brain that used to represent sensation in the lost limb were still functional but now driven by the stimulation of other body parts, usually the part of the body closest to the amputated limb. The investigators also found that in patients experiencing phantom pain, the sensation can be recreated by stimulating within the brain. Phantom sensations could not be elicited, however, in amputees without a history of phantom sensations.

A study of follow-up care for patients with unsatisfactory outcomes from deep brain stimulation (DBS) surgery for movement disorders offers insights into reasons for problems and proposes strategies for improved outcomes. The study is posted online today and will appear in the August print issue of Archives of Neurology, one of the JAMA/Archives journals.

According to background information in the article, since the Food and Drug Administration approved deep brain stimulation for the treatment of Parkinson's disease, essential tremor and dystonia (uncontrolled muscle movement), there has been a surge in the number of centers offering this surgical procedure, which involves implanting a device to deliver mild electrical stimulation to block the brain signals that cause tremor. There is currently no consensus regarding appropriate screening procedures, necessary training of individuals providing the therapy, the need for an interdisciplinary team, or guidelines for the management of complications, the authors report.

Deep brain stimulation via electrodes implanted on both sides of the brain markedly improves the motor skills of patients with advanced Parkinson's Disease, says a new long-term study by researchers at the University of Toronto and Toronto Western Hospital.

"We saw a pronounced decrease in the motor scores associated with Parkinson's Disease - the tremors, stiffness and slowness - and this benefit was persistent through the course of the long-term followup," says Dr. Anthony Lang, professor in U of T's division of neurology, the Jack Clark Chair in Parkinson's Disease Research at the Centre for Research in Neurodegenerative Diseases and director of the Movement Disorders Clinic at Toronto Western Hospital, University Health Network. He and his colleagues used the Unified Parkinson's Disease Rating Scale (UPDRS) to evaluate both the features of the disease as well as the side-effects of medication. They found motor scores decreased an average of 48 per cent. "This is quite substantial when you compare it to other trials of therapy for Parkinson's Disease," he says.

The Story Of A Life-Long Bump Hunter

John Conway says, "I’ve been looking for the Higgs boson for almost 20 years" which sounds like a long time if you are a young scientist but I have a watch missing for 35, so it isn't that impressive.

What is impressive his description of what happened when he thinks he found Higgs at CERN.

I thought the only "Quark" I would ever see was that TV show in the 1980s but sometimes scientific progress creeps and sometimes it leaps. We may be in for a leap.

Anyway, I can't do the article any justice here. Go there and read it for yourself and by the time you come back I will have something to complain about.

The secret to the ability of a molecule critical for cell division to throw off the protein yoke that restrains its activity is the yoke itself--a disorderly molecule that seems to have a mind of its own, say investigators at St. Jude Children's Research Hospital, Innsbruck Medical University (Austria) and Max Planck Institute (Martinsried, Germany).

Who Laid The First Egg?

A decade ago, Shuhai Xiao, associate professor of geosciences at Virginia Tech, and his colleagues discovered thousands of 600-million-year-old embryo microfossils in the Doushantuo Formation, a fossil site near Weng'an, South China. In 2000, Xiao's team reported the discovery of a tubular coral-like animal that might be a candidate for parenthood. 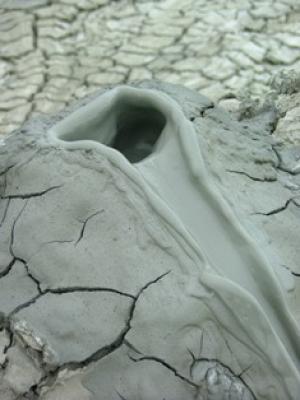 Image of a gryphon, which occur around the site of a mud volcano.

Individual sperm in promiscuous rodents have learned to work together in order to compete against sperm of rival males, according to new research carried out at the University of Sheffield.

Although, sperm are inseminated in millions each sperm goes it alone. However, under some circumstances it might be advantageous for sperm to cooperate with one another. This is especially likely to be the case when females are promiscuous and sperm of one male have to compete against those of rival males.

Embryonic stem cell research should advance a bit more freely because of policy changes announced this week by a major patent holder in this area, the Wisconsin Alumni Research Foundation (WARF). The move could clearly benefit biotech companies and possibly negate for now some criticism that the organization has endured.

The emerging picture of microbes as gene-swapping collectives demands a revision of such concepts as organism, species and evolution itself.

One of the most fundamental patterns of scientific discovery is the revolution in thought that accompanies a new body of data. Satellite-based astronomy has, during the past decade, overthrown our most cherished ideas of cosmology, especially those relating to the size, dynamics and composition of the Universe.

Similarly, the convergence of fresh theoretical ideas in evolution and the coming avalanche of genomic data will profoundly alter our understanding of the biosphere — and is likely to lead to revision of concepts such as species, organism and evolution.

As you probably know ulcerative colitis affects around  half a million Americans.

Today in press releases: The U.S. Food and Drug Administration (FDA) has granted approval for LIALDA™ (mesalamine) with MMX® technology for the induction of remission in patients with active, mild to moderate ulcerative colitis.

If you do not know much about the disease, here is the information:

Ulcerative colitis is a type of inflammatory bowel disease (IBD) that produces inflammation and sores or ulcers along the inside of the large intestine, also called the bowel or colon.

Turning A Cellular Sentinel Into A Cancer Killer

Howard Hughes Medical Institute researchers have developed two strategies to reactivate the p53 gene in mice, causing blood, bone and liver tumors to self destruct. The p53 protein is called the "guardian of the genome" because it triggers the suicide of cells with damaged DNA.

Inactivation of p53 can set the stage for the development of different types of cancer. The researchers' findings show for the first time that inactivating the p53 gene is necessary for maintaining tumors. While the researchers caution that cancers can mutate to circumvent p53 reactivation, they believe their findings offer ideas for new approaches to cancer therapy.

A new survey by researchers at Oregon State University and the U.S. Environmental Protection Agency of more than 600 rivers and streams in the western United States found widespread mercury concentrations in fish.

Though few of the more than 2,700 fish analyzed in the study contained alarmingly high levels of mercury, the prevalence of the element throughout 12 western states caught the researchers somewhat by surprise.

Scientists Identify Gene That May Indicate Predisposition To Schizophrenia

In a new study from The American Journal of Human Genetics, a research team lead by Xinzhi Zhao and Ruqi Tang (Shanghai Jiao Tong University) present evidence that genetic variation may indicate predisposition to schizophrenia.

Beyond Nature Vs. Nurture: Williams Syndrome Across Cultures

Nobody questions that the color of our eyes is encoded in our genes. When it comes to behavior the concept of "DNA as fate" quickly breaks down -- it's been long accepted that both genes and the environment shape human behavior. But just how much sway the environment holds over our genetic destiny has been difficult to untangle.

Scientists at the Salk Institute for Biological Studies have found a clever way to sort one from the other: They compared the social behavior of children with Williams syndrome -- known for their innate drive to interact with people -- across cultures with differing social mores. Their study, published in a forthcoming issue of Developmental Science, demonstrates the extent of culture's stamp on social behavior.