Richard Mankiewicz
I really like this optical illusion made by Japanese artist Hajime Ouchi. It's just so simple - just black and white rectangles - and yet has the illusion of both movement and depth. Reminds me a little of some Vasarely images but his were mainly warped spaces - more optical-candy rather than optical-high! 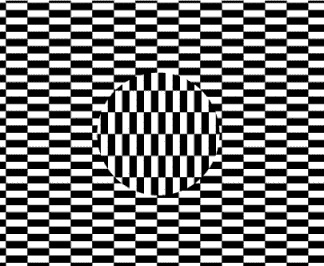 "The illusion is caused by random eye movements, which are independent in the horizontal and vertical directions. However, the two types of patterns in the figure nearly eliminate the effect of the eye movements parallel to each type of pattern. Consequently, the neurons stimulated by the disk convey the signal that the disk jitters due to the horizontal component of the eye movements, while the neurons stimulated by the background convey the signal that movements are due to the independent vertical component. Since the two regions jitter independently, the brain interprets the regions as corresponding to separate independent objects (Olveczky, B.; Baccus, S.; and Meister, M. "Segregation of Object and Background Motion in the Retina." Nature 423, 401-408, 2003.) [MathWorld] mmm... maybe!

If you scroll this page the optical illusion is accentuated. However, if you close one eye and try to stare at the centre of the image, slightly defocus, then the image flattens and the illusion vanishes.