Lately they've been dropping like flies—Imus, Rosie, Rumsie. Who's next? Gonzales? Wolfowitz? And then there's Alec Baldwin—he doesn't, technically, have anything to resign from, but what are the chances his career can recover from the temper tantrum he left on his 12-year old daughter's phone? What about a more esoteric resignation candidate like Cheney? Is there any hope?

Well, it turns out there are some factors that correlate pretty well with a person's likelihood of resigning. Of course, the egregiousness of the crime matters, but what really counts is public outrage—how pissed are people? Really, the only thing that can save you once the tide of public opinion turns is a lengthy track record in the position and your degree of power/fame. This equation works best for famous candidates, but it wouldn't take much mathematical imagination to tweak this sucker to make it relevant to someone closer to home...say, your boss maybe?

Thanks again to the PRI radio program Fair Game for spurring me into investigative action. To hear the audio of the show including in-depth discussion of the Resignation Predictor, attempts at witty banter, and general good-natured heresey, follow the link below. It's the first segment after the opening.

What are the chances person X will resign?

%Scrwd is, of course, the percent chance this person is screwed 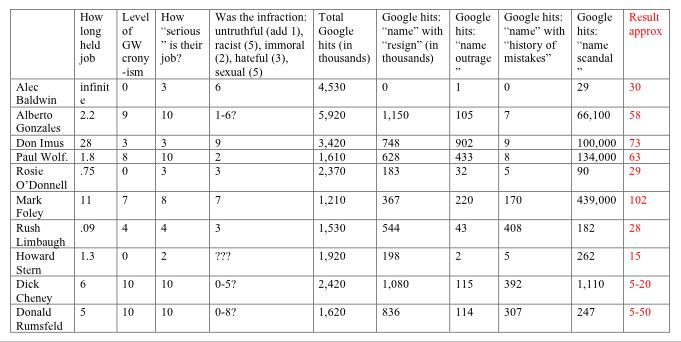 • Alberto Gonzales is an interesting case—if we could define the degree of his infraction, he would either be exonerated or fired. However, public opinion of his infraction puts him somewhere in the middle, between the two options offered by truth. Somewhat the same is true of Cheney, Rumsfeld, and every person whose infraction we can’t actually define (and unlike someone like Foley)

• At the time Don Imus made his nappy-headed-ho’s comment, it was a recoverable mistake (only 73 percent chance screwed). However, he blew the apology, coming off insincere and the public hung him for it.

• For this equation to work with actors and entertainers, “resign” should be replaced with “going down” as in "what are the chances person X is going down?". This more general term looks at whether an infraction will kill their career. Alec Baldwin, as horrible as he looks now, will come out OK, due mostly to his job—actors have leeway (see Tom Cruise). Rosie O’Donnell, while she was forced to resign from the View, will be all right in the bigger picture of her career. You can’t kill an actor, really, they’re like cockroaches.