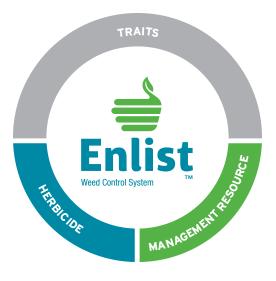 Next week, the Environmental Protection Agency is set to approve Enlist Duo–a new herbicide formulation that combines two popular herbicides, 2,4-Dichlorophenoxyacetic acid (2,4-D) and glyphosate (the active ingredient in Roundup), which are used to control weeds.

The USDA previously gave the green light to Enlist. The approvals open the door to the introduction of the innovations. The anticipation of these approvals has led to a huge outcry by anti-GMO activists, worried that this new weed control system will lead to greater use of more toxic herbicides. A primer seems in order.

Enlist is the name for the herbicide resistant traits that Dow Agrosciences has developed to be paired with their herbicide Enlist Duo. While, glyphosate resistant traits are paired with Monsanto’s RoundUp, Enlist ‘stacks’ a glyphosate trait–resistance to the common herbicide, which is biodegradable and not carcinogenic–with a trait for 2,4-D resistance. The traits have been deregulated (cleared for market) for corn and soy.

There will also be a soybean version of Enlist, E3 which is paired with Bayer VropScience’s Liberty (glufosinate) herbicide instead of RoundUp. Both versions also have traits for herbicide resistance to one or two other lesser used herbicides.

What is Enlist Duo?

Enlists Duo is a combination of glyphosate and 2,4-D Choline, a new version of the herbicide 2,4-D (reformulated to deal with volatility issues that made drift a problem in the past. 2,4-D is an effective herbicide and plant growth regulator widely and safely used for decades in household weed killers, such as Scotts TurfBuilder, and also by farmers. 2,4-D Choline has been in university trials for 3+ years and is seen as a major improvement. Combining the two herbicides makes the problem of herbicide resistant weeds far less likely, and would reverse some of the trends toward weed resistance that has been linked to glyphosate and Monsanto’s Roundup crops.

Why is this trait needed?

This product was developed primarily for preventing herbicide resistance in weeds. The introduction of a 2,4-D tolerant crop would actually lessen the problem, as farmers could rotate in another mode of action.

The sustainability benefits of 2,4-D have been documented, which is why both farmers and cutting edge environmentalists are so eager for the new product.

“We are on a trajectory for continued weed resistance and thus major adverse impact on crop productivity,” said weed science expert, University of Western Australia professor Stephen Powles. “To fight resistance we need herbicide diversity and alternative technologies. Enlist is one such diversity tool.”

It’s very difficult and highly unlikely for a weed to simultaneously develop resistance to two different herbicides with two different modes of action. Research has shown that a “double tank strategy” is more effective than rotating one herbicide and then another. Think of it this way: if there is a 1 in million chance of a weed having a mutation that confers resistance to one herbicide, the odds go down to a 1 in 1012; chance of having two mutations to survive both herbicides simultaneously.

Many farmers will also use this product in fields where they already have glyphosate resistant weeds. University of Wyoming professor of weed science, Andrew Kniss sounds a note of caution here:

In order for herbicide tank-mixtures to delay the evolution of resistance, both herbicides must be effective on the target weed. If one of the herbicides is not effective, then there is still heavy selection pressure for weeds resistant to the other herbicide. For example, a grower might use the new Enlist herbicide (mixture of glyphosate and 2,4-D) to control Johnsongrass. Because 2,4-D doesn’t provide much control of Johnsongrass, the grower would continue to select for glyphosate resistant individuals. Another example would be using the Enlist herbicide to control glyphosate-resistant weeds. Since the glyphosate would not be providing any control of the resistant biotypes, there would be heavy selection for 2,4-D resistant individuals, eventually resulting in weeds resistant to multiple herbicides. The herbicide tank-mixture approach only works for resistance management when both herbicides are effective on the target weeds.

No. Fear mongering around the fact that 2,4-D was an ingredient in Agent Orange has plagued coverage of the development of these crops. 2,4-D was part of Agent Orange, but it wasn’t what made Agent Orange a danger back in the 1960s. Agent Orange was a combination of two herbicides, 2,4-D and 2,4,5-T. It was 2,4,5-T that was unknowingly contaminated with dioxin, a different chemical, and caused terrible health problems.

As Dr. Kevin Folta of the University of Florida horticulture department has written, “2,4-D is not Agent Orange. If someone say this, or even evokes the tragic use of chemical warfare to influence you…you are being manipulated.”

The Environmental Protection Agency has evaluated 2,4-D numerous times under increasingly stringent risk assessment evaluations and consistently found the comparatively mild herbicide safe. USDA’s Animal and Plant Health Inspection Service (APHIS) endorsed the safety of the traits years ago after extensive reviews, but the final approval process slowed to a crawl in the face of activist pressures.

2,4-D has continued to be one of the most widely used, safest herbicides in the world.  It is registered in 70 countries, including those with very comprehensive and cautious regulators (Canada, the UK, Germany, France, Japan…). 2,4-D is a component of most consumer products for the control of weeds in lawns. It is used extensively in wheat.  It can already be used on corn up to a certain growth stage.  2,4-D is NOT Agent Orange.

There was a very limited understanding of environmental  toxicology in America in the early 1960s. The modern environmental movement was just beginning, and the Environmental Protection Agency (EPA) was not established until 1968. So during the early 1960s,  terrible mistakes were made with Agent Orange that are completely unthinkable today. Since that time the scrutiny of new and old pesticides has become comprehensive. It would be virtually impossible for an Agent Orange-like mistake could occur today, but that is what CFS and its repeaters are implying.

A great many of the pesticides that were in use in the early 1960s have long since been banned or progressively replaced with far, far safer alternatives.  A few, like 2,4-D, have continued to pass safety standards as they have been intensively reviewed and re-reviewed over the decades of increasingly sophisticated analysis.  2,4-D has been scrutinized and challenged from both a toxicological and epidemiological perspective.  In every round of risk assessment, the EPA and its outside experts have concluded that 2,4-D has meets the EPA’s, ever more cautious, standards.

As with all toxins, the dose makes the poison and the mode of action determines what it might be harmful to. In terms of human safety, 2,4-D is labeled as a class I (DANGER! POISON) pesticide in terms of toxicity due to the danger of eye exposure. Glyphosate is labeled class III (out of I to IV, I being the most toxic) with the warning, CAUTION! CAUSES MODERATE EYE IRRITATION.

However, the summary of the research across a wide range of issues by the National Pesticide Information Center at the University of Oregon, shows that 2,4-D is not considered to be a carcinogen for humans, is considered practically non-toxic to bees, has no carcinogenic or reproductive effect in various animal studies, is fairly benign to aquatic animals except at very high doses and does not persist in soils.

In fact, it breaks down faster than glyphposate. The NPIC summary underscored that it is safe as used. This is not to say that there no negative effects have been observed, but they were associated with minor and unusual conditions at abnormally high doses.

Not likely. Although many activists have raised the specter of a large increase in the use of 2,4-D, it’s not clear that is what we are facing. Nathanael Johnson, the food and agriculture blogger at the environmental website Grist provides valuable perspective:

“The way the GMO herbicide-resistant crops were deployed was like the worst possible scenario for developing resistance,” said Carol Mallory-Smith, a professor of weed science at Oregon State University.

…My guess is that we’ll go down the same path again,” Mallory-Smith said.

Larry Steckel, a weed specialist at the University of Tennessee, disagrees — he doesn’t expect to see these herbicides dominate the market the way glyphosate did, because they just aren’t as good. Dicamba and 2,4-D have been around for a long time, and have never had the addictive appeal of glyphosate. Dicamba, for instance, only works if you spray weeds when they are less than five inches tall, while glyphosate can kill a full-grown weed (or at least it could). And that huge difference in effectiveness will remain if dicamba and 2,4-D tolerant GMOs are released.

“The EPA is on the brink of approving a brand new toxic pesticide you don’t know about.”

The product in question, Enlist Duo is a combination of two very old herbicide products: 2,4-D and glyphosate. A great many consumers do know about these materials because they have been approved for homeowner use for decades and are common ingredients in products available at any neighborhood gardening center. These chemicals are still approved for use in more than 70 countries around the world and for use in high exposure settings like lawns, parks, sports fields and gardens. They are still used this way because after multiple rounds of increasingly sophisticated scrutiny by regulators, they have been confirmed to be quite low in toxicity to humans and to the environment. This product is neither “brand new” nor is it notably “toxic.”

If this product is approved, “70 to 100 million pounds of additional, highly toxic pesticides will be used”

OK, lets put this in a little perspective. Between corn and soybeans there are more than 150 million acres in the US, so the number Oz throws out represents less than a pound per acre. Herbicides were used on these crops long before biotech so this use isn’t really “additional.” Also, the term “highly toxic” simply does not apply to these materials from a human perspective.

Monsanto’s Roundup Ready GMO seed line, which incorporates traits resistant to the herbicide glyphosate, has led to a sharp reduction in the overall toxicity content of chemicals sprayed because glyphosate is so much less toxic and environmentally risky than the chemicals it replaced. The same would happen with Dow’s 2,4-D corn or soybeans. The new products would give farmers multiple options to further control the weed problems that have dogged modern agriculture for 50 years.

These new products are incremental improvements hitting the market as farmers adjust to the reduced effectiveness, in some cases, of glyphosate resistance crops and will proivde a leap forward in managing ‘superweed’ concerns.

Marc Brazeau is a writer and agriculture editor for the Genetic Literacy Project. He blogs at Food and Farm Discussion Lab. Follow Marc on Twitter @realfoodorg.