Gary Hirshberg is a bit selective when it comes to transparency and labeling food and ingredients…at least when it applies to his own products.

In a televised interview with Bloomberg earlier this month, Hirshberg–the chairman of Stonyfield Organic and funder of the anti-GMO, pro-labeling Just Label It organization–was asked by a reporter why the company doesn’t give more information about the ingredient on its yoghurt cups: ‘natural flavor.’

What the heck is “natural flavor”? the reporter wanted to know, holding up a Stonyfield tougher cup? What are the actual ingredients, he asked Hirshberg, who regularly campaigns for labeling transparency–when it applies to competitors.

“We’re complying with FDA laws,” Hirshberg replied, clearly taken aback by the question. His response sounded more like a carefully crafted statement from a Big Food executive rather than the reaction of the self-proclaimed progressive voice for a consumer’s right to know. “Natural flavors is a term of trade…but we welcome consumers demanding that kind of thing.”

In other words, he wouldn’t frankly answer the question.

It was interesting to watch Hirshberg squirm. And for a guy who spends lots of time – and money – trying to convince voters and legislators to mandate GM labeling, it was a revealing moment. He’s strident about labeling genetically engineered ingredients and underwrites groups like Just Label It, Only Organic and Food Policy Action yet defends his own lack of transparency. He scoffs at those who insist GMO labels would impose an undue burden and cost, but laments the onerous task of defining one of his company’s most widely-used ingredients.

“If you list the ingredients in natural flavors, I would have to have another couple pages,” Hirshberg said, laughing off the question. Then perhaps catching his own hypocrisy, he rebounded with, “but we’re all for it.”

The truth is that Stonyfield can print any information it wants on food packaging; the FDA doesn’t pre-approve food labels. And if the ingredient list is too technical or lengthy, it could be posted on the Stonyfield website for full disclosure. I’m sure Stonyfield could even post a cute cartoon or colorful picture to explain the ingredient (the company apparently thinks moms need child-like visual aids in order to understand information).
A deeper dive into Stonyfield’s packaging shows the company has been consistently hypocritical about its ingredients. The Environmental Working Group posts scores for 80,000 food products, including more than 100 from Stonyfield. Many Stonyfield products were flagged by EWG for containing “the non-specific ingredient ‘flavor’.” According to EWG, “added flavors are secret and often complex mixtures of chemicals that modify and manipulate the taste and smell of food. The lack of disclosure is a public right to know issue and especially concerning to people with unusual food allergies or on restricted diets.”

Two frozen yogurt bars received an 8 out of 10 (10 is the worst score) because “rice-based ingredients may contain arsenic.” Both products use rice syrup as a sweetener and according to the EWG, “a rice plant naturally takes up arsenic from the water in the soil. The concentration of arsenic in this product will depend on the amount of rice-based ingredient used.” But you won’t find that information on the Stonyfield container.

Arsenic isn’t the only scary-sounding ingredients lurking in Stonyfield treats. The Cornucopia Institute released a comprehensive report on the yogurt industry last year – Culture Wars – that closely evaluated dozens of yogurt products. The report scored yogurt companies on a number of criteria. While Stonyfield scored well overall because it’s organic, the company received a “zero” for a few categories, including added flavoring, added coloring and synthetic nutrients. 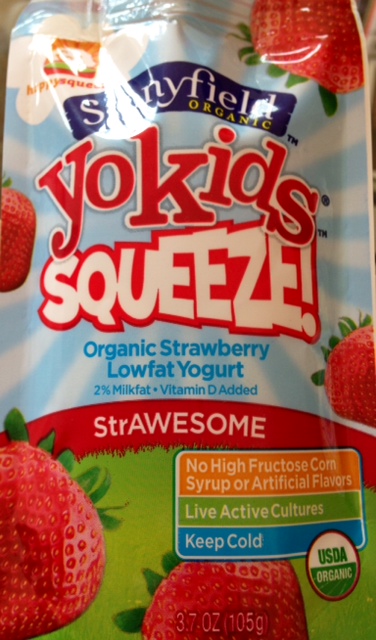 Stonyfield was also called out for using carrageenan in its squeezable yogurt products. Carrageenan is an extract of red seaweed (so therefore natural) but – according to the Cornucopia report – “scientists have warned that the use of carrageenan in food is not safe. Animal studies have repeatedly shown that food-grade carrageenan is associated with gastrointestinal inflammation and higher rates of intestinal lesions, ulcerations and even malignant tumors.”

Even if the claims about carrageenan are questionable, you can be certain Stonyfield consumers would “want to know” (a favorite adage of Mr. Hirshberg) about its use. In fact, Stonyfield’s website addresses carrageenan and promises “changes to our other recipes that include carrageenan.” But again, that ingredient is not listed on Stonyfield’s squeezable yogurt.

Kinda shady policy from a company whose chairman said in that same interview, “you can’t have it both ways. If you’re fighting labeling, you’re concealing. And we’re saying you should be revealing.”

Hirshberg’s interview stumble could be a metaphor for the anti-GMO movement of late. It’s been a rough several months, culminating with a huge media backlash to Chipotle’s dubious GMO-free menu claim. The shine may be coming off the organic apple and Hirshberg – about as smart and shrewd of a businessman as you’ll find – might be feeling the heat.

Last year’s elections delivered strong setbacks to the anti-GM movement: the defeat of pro-labeling initiatives in Oregon (close) and Colorado (by a 2-1 margin). National newspapers continue to editorialize against GM labeling laws, including a Washington Post op-ed in March that strongly argued against the idea and a piece in USA Today this week suggesting that opposing GMOs on safety grounds–as Hirshberg does–is a “kooky notion.” The anti-GMO activists may still sit atop a populist groundswell by the science minded and the chattering classes now see therm as hapless pseudo-science stooges.

There are other dark clouds for Hirshberg and activists in the organic community. A study released by Mintel, a London-based food and drink research firm, shows consumers are growing wary–and perhaps weary–of the organic label. “While sales of organic products are on the rise, actual consumer penetration has plateaued,” the firm noted. Although Millennials are organics biggest consumers, overall, only one-third of all consumers had purchased an organic products in the last three months.

Shoppers of all ages might be catching on to the marketing tactics of the extremist wing of the organic industry. “Our research finds half of consumers say labeling something as organic is an excuse to charge more. Considering the typically higher cost of organic foods and beverages, consumers are increasingly hard pressed to justify the added expense,” said Billy Roberts, Senior Food and Drink Analyst at Mintel. “As such, sales have hit something of a plateau, where they likely will remain until consumers have a clear reason to turn to organics.”

Given that information, it might be a wiser strategy for Hirshberg to return to selling organics honestly rather than peddling a fear campaign against GMOs. After all, he’s the one who warned that “…these companies, these brands, are going to quickly find out that the cost to their reputation for fighting labeling are probably more than the cost of having labels.” To the contrary; fighting for mandatory labeling might cost both the reputation and bottom line of the organic industry in the long run.

Julie Kelly is the owner of Now You’re Cooking in Orland Park, IL. She is a cooking instructor and food writer, but her biggest job is mom. She can be reached at nowurcooking@att.net or on Twitter at @Julie_kelly2. Republished from Genetic Literacy Project. Read the original here.