Gerhard Adam
"Heritability" is a term used in many articles and through much of the scientific literature and invariably promotes the idea that it relates specifically to inherited traits.  As a result, it is often assumed that the heritability of a particular trait relates to how much influence genetics has on the trait manifesting in an individual.

However, that isn't what it means.

Heritability attempts to address the relationship between nature (genetics) and nurture (environment), so that as each changes, the variation between individuals within a population can be estimated based on these influences.  In this context, "environment" simply represents everything external to the genome that could effect expression.

Therefore the first significant aspect of heritability that must be understood is that it tells us nothing about individuals.  It is strictly an estimate of the variations that occur within populations.  If heritability is applied to an individual it is a meaningless concept [since an individual cannot be said to vary with anything].

It also doesn't tell us anything about the specific influence of genes on any particular trait, since that would be the result of inheritance.  We also need to understand that a trait is something that is "selectable".  In other words, there exists a possibility that outcomes can vary in the expression of a particular trait.  This follows from the Mendelian view of inheritance where genes are represented as two alleles [dominant and recessive], so that particular combinations would produce certain outcomes.  Therefore if there is no variation in the alleles, then everyone has the same genes and heritability would be zero.  Adaptations like having a heart or a stomach are not selectable (too many genes and interactions) and therefore tell us nothing about heritability.  The primary difference is that adaptations represent the cumulative effect of changes over time that have gone to fixation in a population.  As a result, there is no "selection" that would determine "heart or no heart".  Therefore we can consider that the heart is an adaptation, while the risk of heart disease is a trait.

So what does it tell us?

If we assume that both genetics and the environment influence the traits present in an organism, then we must account for which is the greater influence on differences between organisms (1).

So let's conduct a thought experiment to illustrate what is being evaluated.

Assume that we can create an environment that is identical in every aspect for a particular population of organisms.  They develop and grow and as they reach adulthood we observe differences in the traits that they manifest.  Since the environment exerts an identical influence on the organisms, then we can rule out the environment as being a factor [in other words, it will affect them all equally].  From this we can conclude that whatever differences exist between organisms [variance] must be the result of genes alone.

In this case, the heritability would be 1.0 or 100%, indicating that only the genes are responsible for the variation we see between individuals.

Similarly we could conduct another thought experiment where we take individuals that are genetically identical [clones] and subject them to various environments.  When we examine the traits, whatever variation exists cannot be due to the genes [because they are identical] therefore, the variation is solely affected by the environment.  In this case the heritability would be 0.0 or 0% (2).

However, what makes this concept a bit difficult is when we consider actual numbers within this context.  For example, let's consider that height may have a heritability of 0.90.  What this means is that while there is an influence exerted by environmental factors (such as nutrients) in the height of an individual, the major portion of the influence is exerted by the genes.  More importantly, it really tells us that the major influence in explaining the DIFFERENCES between individuals is accounted for in this fashion. 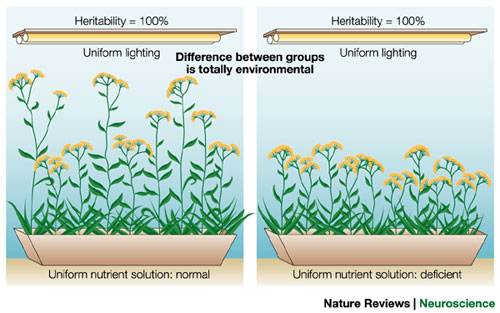 Note that it tells us nothing about what gave rise to the particular height for any particular individual, but rather what explains the differences between individuals within a particular population.

What this particular designation provides is a means by which we can begin to estimate or assess the influences that may be present in particular traits.  So while genes are responsible for the expression of a trait, heritability is used to determine how specific such an expression is to the genes alone.

As a result, heritability is often used in artificial selection to establish which traits are the most likely to be successfully selected for.  The higher the heritability of a trait, the more influence one has in obtaining that trait by selecting the best breeding pair.

One difficulty that arises with heritability is that any considered trait must be demonstrably linked to genetic transmission.  This can become problematic when heritability is used to evaluate behavioral traits where the genetic link may be tenuous.  In an effort to measure heritability, there is often a reliance on twin studies under the assumption that variances between them must be accountable to environment since they are effectively genetically identical.  However, as previously mentioned, this can result in difficult interpretations when the traits in question are purely behavioral.  Until such time as behavioral traits can be explicitly linked to genes, any statement regarding heritability must be considered suspect.

It is given that genes are responsible for the trait itself.  Heritability attempts to establish the influence of nature (genes) versus nurture (environment) on the variability in a population.  Therefore the variation of a trait that has a heritability of .30 can be said to be influenced by genetics at about 30% and the environment at 70%.  In addition, such traits must actually be selectable.