We are all familiar with gravity. Gravity is what makes us earthbound. It causes ourselves and any object in our vicinity to accelerate downward at 9.8 m/s2. Newton has shown that this holds true in a much more general sense: gravity is the acceleration field associated with any massive body. This gravitational acceleration is attractive, proportional to the mass of the body, and inversely proportional to the square of the distance to the body. Via this universal acceleration, gravity determines the celestial dynamics, it shapes galaxies and determines the ultimate fate of the universe.

But what causes gravity? Could there be an underlying layer of reality from which gravity emerges?

More than three centuries after Newton formulated his laws, we still don't know.

Enter Dutch theoretical physicist and string theorist Erik Verlinde. Last Wednesday Verlinde is reported to have presented his latest work at the Spinoza Institute in Utrecht. In front of an audience that included Nobel Laureate Gerard 't Hooft, Verlinde apparently claimed no less than being able to derive gravity from the ground-up. Do I hear you mutter the words 'cargo cult science'? Maybe. However, you might want to Google “Verlinde formula” and search for author “Erik Verlinde” on arXiv. Does this convince you that we are dealing here with a well-respected scientist?

Following his presentation in Utrecht, Verlinde gave an interview to the Dutch newspaper “Volkskrant”. This interview appeared in the science section of the Weekend Edition A summary (in Dutch) is available here. Today, a friend e-mailed me the full article. Unfortunately, the text is in Dutch and, apart from some comments related to the holographic principle, contains little or no details on Verlinde's derivation of Newtonian gravity. To make things worse, in the article Verlinde is quoted to be finalizing a publication on his theory. A quick inspection of arXiv confirms that Verlinde has indeed not yet published a paper on this subject.

So to learn more about Verlinde's work, it seems we have to exercise some patience.

Well, this might be too pessimistic. There is a glimmer of hope. A picture accompanies the newspaper article. Shown is Verlinde in his office, standing in front of a blackboard. A blackboard on which some scribbles and equations are vaguely visible. I have copied the photo below. 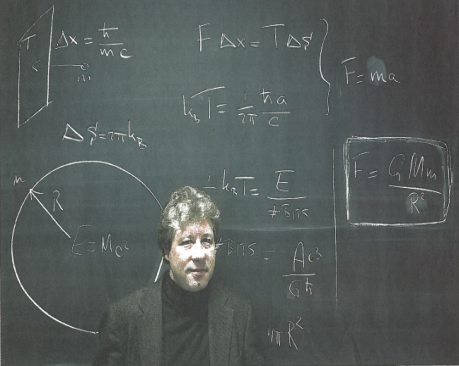 Are these scribbles enough to get a basic understanding of Verlinde's work? I think so.    (Photo Credit: Guus Dubbelman / de Volkskrant)

Now, I am going to give you my interpretation of the blackboard scribbles, but I am certainly not going to claim that my interpretation is complete and accurate. It might, in fact, be completely beside the point. Anyone who feels to have a better interpretation is invited to put these in a comment to this blog. This is your chance to discuss a potentially important piece of work even before it is published!

As already mentioned, Verlinde starts from the holographic principle. Imagine a spherical screen with radius R surrounding a physical system of mass M. According to the holographic principle, all the physics that takes place within the screen can be described by bits of information that can be thought to be located on the screen. If each bit occupies an area Abit, a total of N = 4πR2/Abit bits is available to describe the system surrounded by the spherical screen.

Each bit is associated with a degree of freedom of the system being described. According to the equipartition theorem, each degree of freedom caries on average an energy ½kT, with k representing Boltzmann's constant and T the absolute temperature. As the screen is assumed to be at rest with respect to the system with mass M, from the perspective of the screen the total energy of the system is given by Einstein's formula E = M c2. It follows that ½kTN = Mc2.

Substituting the expression for the number of bits (N) into this energy equation, it follows that a temperature T can be associated with the screen according to: ½kT = Abit Mc2 / 4πR2.

The holographic screen is not a physical screen but rather a thought construct created to represent the information contained in a physical system. How can such a non-entity have a temperature? The Unruh effect lends us a hand here. According to this principle, an observer being accelerated in empty space will record a non-zero temperature of that empty space. This temperature is proportional to the acceleration: ½kT = ћ a / 4πc (here ћ denotes the reduced Planck constant [http://en.wikipedia.org/wiki/Planck_constant] and c represents the speed of light). Reversing this argument, a non-physical entity that has a temperature can be thought of as being accelerated.

Equating the expression for the temperature of the holographic screen with the expression for the Unruh temperature yields: Abit Mc2 / 4πR2 = ћ a / 4πc, or: a = GM/R2 with G = Abit c3/ ћ. Et voila: Newton's law of universal gravitation...
You get the correct value for the gravitational constant G if you set Abit equal to a Planck area (2.6 10-70 m2).

Again: I am just interpreting some scribbles here. See this as some first impressions without giving the whole idea too much thought. There is absolutely no guarantee that my interpretations come anywhere close to Verlinde's thoughts. We will soon know more. Watch this space.

Three critical notes to the above interpretation need to be mentioned here: