Recently, Erik Verlinde proposed a revolutionary new perspective to gravity extensively discussed in this blog. He notes that gravity has all the characteristics of an entropic effect, and presents clear arguments that gravitational attraction between massive bodies can be considered as resulting from nothing more than a growth in number of bits required to describe the system of massive bodies. Key is that this description of the physical system is holographic in nature, with the bits describing reality residing at holographic screens. 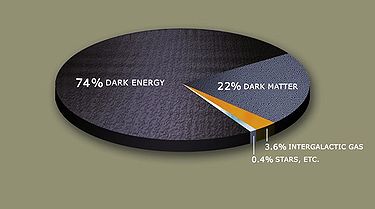 I previously posed the question “can dark energy, just like gravity, be understood as an entropic effect?”.

To my astonishment, it appears that a quick 10 minute exercise in determining the entropic force exerted on the entire observable universe indeed yields an effect with the right order of magnitude to explain the cosmic dark energy (or cosmic acceleration). It seems that a dark energy effect emerges from Verlinde's holographic description. All 123 orders of magnitude of the dark energy mismatch evaporate when considering the cosmic acceleration as a result of a holographic entropic force.

The line of reasoning is as follows (for ease of notation I will work in natural units and leave out factors c, G and h-bar):

Two critical notes to the above speculative derivation need to be mentioned here:


Keen to get your comments to above speculations!
The hammock physicist
More Articles All Articles
About