Hank Campbell
A new survey has good news for the alternative-to-cattle market, Beyond Burgers and the like; 54 percent of surveyed Americans claim they have tried it and 70 percent of those thought it okay.(1)

Burger King is a game changer on that, and over 40 percent reported buying it there. That all sounds great, but there is a confounder. The survey of 30,700 conflates lab-grown meat and vegetable patties, which have gigantic differences among consumer beliefs. That said, it still has some good news for companies in that space.

Meat eaters are most likely to give science a chance. The overwhelming majority were meat eaters, not vegetarians. As in a 300 percent difference in people who tried alternative meats. Obviously being vegetarian may have reasons that have more to do with philosophy, so they don't want something that tastes or feels like meat.

It ain't health food. A gigantic 42 percent of those who said they would buy it again cited health reasons, so evidence-based thinking often ends in one area as it begins in another. Anyone who claims anything other than calories matters is selling you something - like vegetables. Science does not show eating meat is unhealthy. Statisticians like International Agency for Research on Cancer (IARC) have tried to claim that it does, but beginning in 2009 the French organization became so rife with corruption, conflicts of interest, and collusion against companies that none of their work can be trusted. It's now safe to assume someone on their Working Groups has a contract with an attorney to sue over whatever is 'linked' to cancer in their next monograph.(2) 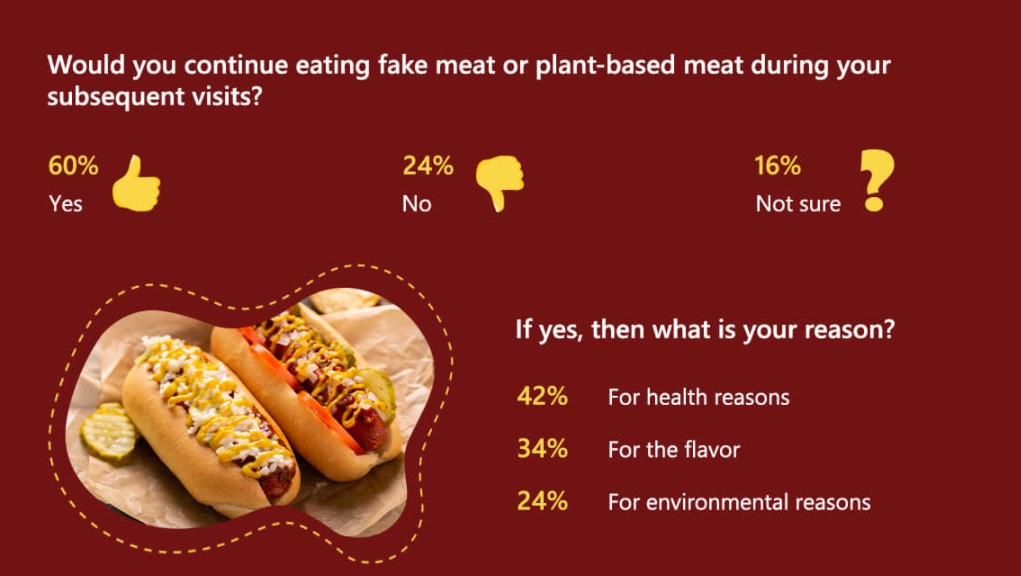 Does this read provocative? The company refused to disclose who funded the survey but terminology like fake meat and plant-based meat (as if that would not be fake? How can you have meat that is a plant?) certainly biased the results if they used that in the survey.

It is not better for the environment. Believing alternatives to cattle are better for the environment is The Tesla Gambit - where a car company for rich white dudes slaps "zero emissions" on their pricey automobile and think that makes it fact. In the real world, a car charger is as much strain on the grid as an extra house, and over 80 percent of that electricity is still from fossil fuels. The same percentage as when the Obama administration threw $100 billion to subsidize companies making solar panels. Land that cattle graze on is useless for crop agriculture and cows would be extinct if they were not managed by humans. They use feed and water to become bigger food and both of those are renewable and recyclable.

No government involvement is a plus for the alternative meat market. Lack of government involvement is a big benefit. Companies doing basic research on solar power over the last 50 years were puzzled at why the Obama administration began to throw a hundred billion dollars at companies saying they could compete with China and its $1 an hour pay rate on, of all things, solar panels. Like with ethanol, desire to believe solar was 'ready' if government just 'primed the pump' has been a dismal, expensive failure. Because government is not picking winners and losers in the Burger King supplier market, the free market will spur innovation and cost efficiency.

In the 1990s, some companies wanted government to subsidize the computer industry - because Japan did. Can you imagine how expensive a smartphone would be if government did to phones what they did to cable television and utilities? Rich people would get theirs subsidized while poor people would have to pay higher costs for keeping their old landlines. Just like poor people have to pay extra fees each month so solar power customers in Malibu can sell electricity 'back to the power company at the same price' they buy it.

(1) I tried one once and thought it fine. It's science and I am a fan of anything if it looks cutting-edge, the same way I will try a new synthetic grape flavor, hoping they finally get it right.  It was fine, a little dry, and expensive, which meant it was virtue signaling to the kinds of wealthy coastal elites who buy 65,000 Non-GMO Project stickers to replace the 1 GMO they would buy anyway. But that is just scale.

(2)  Being an expert witness is where the big money is and IARC began to arbitrarily exclude consultants from companies from their panels. Let's be honest, the private sector hires the best people as consultants. If you have never been hired as a consultant, you are just not very good at your job. However, environmental groups and lawyers hire people who will say what those groups want them to say, no expertise is needed, just a PhD title and any membership in a fancy sounding group. Having a fat contact with Environmental Defense Fund or an attorney does not have to be disclosed or considered a conflict of interest.

We are fortunate that IARC epidemiologists are limited to undermining science on food and chemicals, and not vaccines, or California would be forced to put a warning label on COVID-19 shots linking them to cancer. The state requires by law that anything on an IARC monograph get a warning label in the state, which has made it a running joke for tourists. The plague of bad epidemiology produced by IARC and our own NIEHS (National Institute of Environmental Health Sciences) has undermined trust in disease epidemiologists. How will people trust the math on diseases when every month the same field produces some new homeopathic belief about chemicals?
Science 2.0
More Articles All Articles
About