A Sign The Pandemic May Be Over: Media Tout Study Claiming Nutrasweet Gave A Mouse Anxiety
By Hank Campbell | January 9th 2023 06:39 AM | Print | E-mail

Hank Campbell
Things are getting back to normal because even though activist journalists are now covering a Tripledemic of COVID-19, flu, and RSV (respiratory syncytial virus) they have also found time to promote a story that claims a zero-calorie sweetener, asparatame, common in products like Diet Coke, Crystal Light, whatever causes anxiety.

That's right, media have taken time from writing about something that may be important for the public to write about a paper claiming that aspartame gives mice anxiety.

We must be safe when we're back to covering mouse studies about safe products.

That mouse part is the reason you can relax, unless you read the New York Times or Washington Post and live your life in the constant state of panic they foment. Mice are not little people. Mouse studies are often barely even science, any finding using a mouse goes into the exploratory pile.(2) There are no drugs approved using epidemiology questionnaires, computer simulations, or mouse studies because they are irrelevant to humans. They can exclude an effect but never show it. Both are mammals, and humans and mice share 70% of DNA, but humans and bananas also share 50%, yet activists never claim some study using bananas means a chemical must be banned. 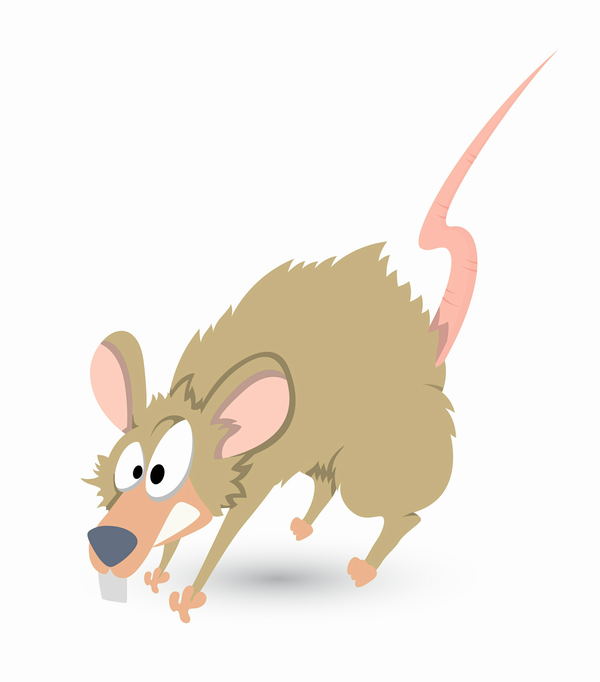 That it is in PNAS (Proceedings of the National Academy of Sciences) is unfortunately not a surprise. This is the journal that published a paper claiming female hurricane names mean more deaths because men are sexist and colluded with Facebook to publish results of engagement when Facebook manipulated news feeds without telling the public.(3)

There is no way to know how much peer review any of those had. In the Wall Street Journal, I exposed how a bombastic claim about a weedkiller named atrazine got published without going through peer review, using a holdover process from the 1800s. The 'reviewer' had the lead scientist, Professor Tyrone Hayes of Berkelely, over to his house for dinner each week, but as a member of the Academy he was able to hand-walk his paper past peer review.(4)

This study is not egregious like the Hayes paper, which read more like the plot in poorly crafted environmental apocalypse fan fiction than science. They used a sensible framework of feeding mice aspartame equivalent to 6-8 diet sodas per day. 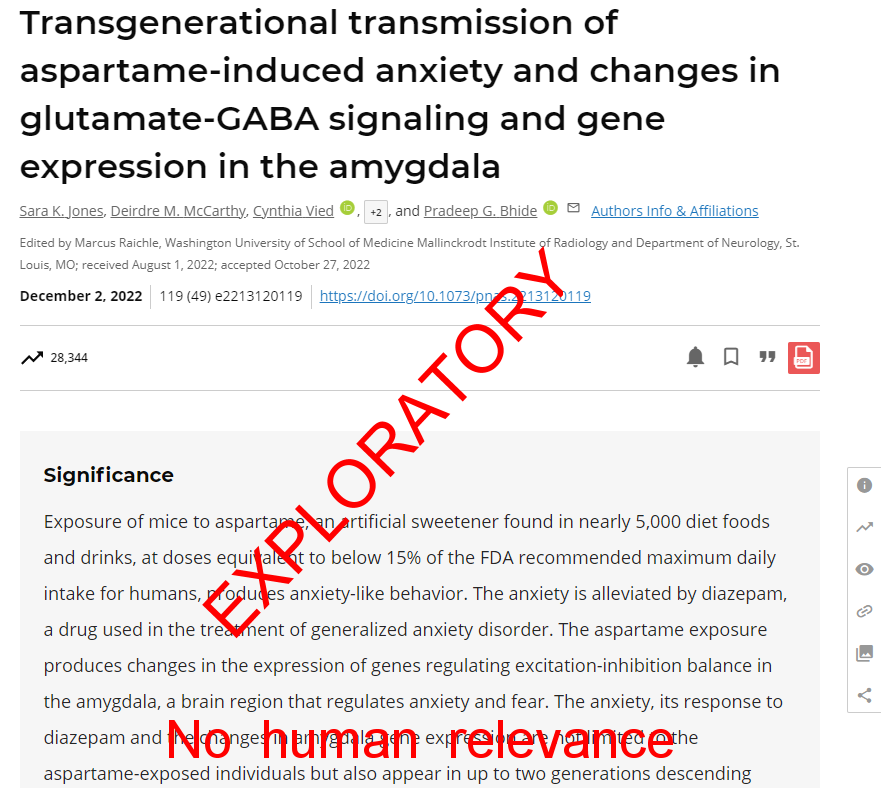 Still, it is what they did after that which merits skepticism.

1. As noted, it is in mice.
2. You can't measure anxiety in mice. You can only subjectively interpret changes in how well they do something like finish a maze. So we are now down to a proxy for an effect in an exploratory paper being suggested as human relevance. A giant red flag.
3. Lacking a plausible biological mechanism for how aspartame could possibly cause this proxy of anxiety in mice they invoke epigenetics, which is so abused and overused as a black box in these kinds of studies it's basically pointless.
4. “It was completely unexpected," claims one of the scholars. That had better be hyperbole, because a Hypothesis After Results Are Known, HARKing, like its brother Data Dredging, is a no-no in serious science. It is impossible to believe you fed mice asparatame to see if anything happened to pups and were surprised something happened to the pups.
5. Valium calmed the mice down and therefore aspartame made them nervous, they infer. That is just silly correlation. Diazepam calms down lots of animals. In Northern Ireland, 87% of impaired drivers who weren't drunk were on a benzodiazepine. That does not mean that aspartame made them better drivers.
6. The same data is also going to claim in another paper that aspartame caused memory loss. All from an experiment where they were surprised to see any effects? No one is buying that, any more than they are buying that a common product with no health effects in 40 years is suddenly responsible for memory loss and anxiety.

(1) If RSV is a big concern protect an infant or someone elderly prone to respiratory issues the same way you would keep them from getting the flu. Various vaccines have been tried since the 1960s, and Novavox even went to Phase III trials twice in the last 10 years but it failed. Science is hard.

(2) So few journalists understand how invalid exploratory studies are for human relevance that I have asked NIH in meetings to make grantees have EXPLORATORY watermarked on all pages of their work - and NIH heads laughed, because they know it is an issue but impossible to stop.

(3) Black people look blacker in a bad economy. I could go on. Once PNAS let in the social sciences, and then once those became cultural woo, they don't have a lot of credibility.

(4)  A month after I exposed that travesty of science in the Wall Street Journal (though groups like Pesticide Action Network still fly Hayes around to scare school kids about science using his unvalidated beliefs) PNAS removed that legacy process.

Unaware at that time how flawed PNAS peer review was, EPA convened a panel to investigate his claims that an approved weedkiller 'turned frogs gay', as Professor Hayes phrased it. Professor Hayes refused to send the data no one at PNAS had seen, claiming EPA was part of a Vast Corporate Conspiracy with the company behind Atrazine. EPA created its own studies anyway, and forced Syngenta to pay for both of them, and then cleared the product again. Now, with epidemiologists invading EPA in even greater numbers, they will likely get it banned without banning it, by setting a level in water so low no product in use could meet the standard. The activist war of extinction against science never stops.
Science 2.0
More Articles All Articles
About