Hank Campbell
In its 47 year history, the Endangered Species Act went from an essential law to protect actual endangered species to a hammer with which to pummel companies and landowners. What started with an American bald eagle became holding housing development projects hostage by getting an obscure endangered designation for some creature and then demanding huge settlements and fees to 'protect' it.

In one case, the Mississippi Gopher Frog, they were even able to hold landowners in a completely different state, Louisiana, hostage, until the Supreme Court issued a unanimous ruling against the federal government and its environmental allies.

The reason environmental lawyers have been able to get away with it is that there is no established scientific criteria for what the government considers "endangered" while the public believes there is, and therefore gives it a free pass. In practical terms, that has meant that when a politically sympathetic side is in power, it's open season on the science.

And when environmental lawyers haven't been able to get a lawsuit-ready creature listed under the incredibly broad endangered category, they lobbied for and got one with even less evidentiary rigor - "threatened."

Republicans in general are going to want to see evidence before they create new regulations and penalties so it has been a long four years for litigation groups like Center for Biological Diversity, who saw their carefully groomed placements inside US Fish and Wildlife and other agencies profit them little. Now, a group of activists writing in Science are expecting the Biden administration to get back to belief over evidence. But they don't just want a return to the Obama administration, they are lobbying for record numbers of endangered species listings based on speculation, with little care for data - they want the Precautionary Principle to be a Supreme Court over data.

That want speculation to win.

As an example, they lament that the arctic ringed seal is not classified as "endangered" when it is not endangered - but might become so in 2060, if climate models that estimate sea ice losses are legitimate. The Fish  &  Wildlife Service dismissed their claim because computer estimates about climate 40 years in the future are not science. The activists are hoping the Biden administration will return to the old ways because the National Marine Fisheries Service under Obama had at least listed the seal under the meaningless "threatened" based on estimates for 2100.

Scientific criteria and transparency in government would be bad for environmentalists

There are 2,000 pandas yet they are not endangered while 25,000 blue whales and 100,000 sea otters are. That actually makes sense, because those rulings were made at a time when the Endangered Species Act made scientific sense - rather than being part of prearranged settlements with environmental lawyers, many of which we got just a few years ago.

An endangered species is logically at risk of extinction. Anyone would agree that is valid. What activists have done when political allies are in power is to stretch the definition of "at risk" beyond recognition.

Scientists say a species is in the extinction zone if "a significant portion of its range", which is 30 percent, has been eliminated, whereas environmental lawyers and activists say that number should be 5 percent - over 100 years.

Now they want the Biden administration to stretch that even more and give them an endangered species listing if a computer estimate says it might be 5 percent over the next 100 years.

Yet it can be policy, and that is thanks to the Supreme Court siding with activists in Chevron U.S.A., Inc. v. Natural Resources Defense Council, Inc., 467 U.S. 837, which gave "deference" to agencies when interpreting statutes Congress requires them to administer, it often has been policy.

In other words, government agencies can pass laws without Congress, by using the authority Congress gave them to create regulations that act as laws.

That means activists have leveraged such agencies during administrations where their political allies are in power - and hope to do so again.

Yet during just two recent administrations - Clinton and Obama - we've seen 70 percent of all Endangered Species Act listings occur. Despite every actual endangered species already being protected for decades. 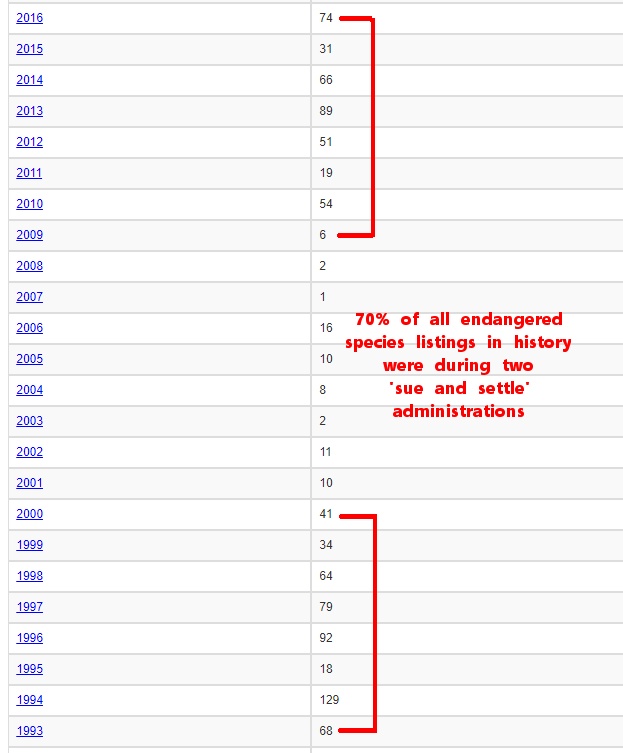 Those two administrations demanded far less evidence for what "endangered" might be, yet when the Trump administration asked for more scientific rigor, it was accused of undoing the entire Endangered Species Act. Those of us in science media who endured being told President Bush "banned" stem cell research when his was the first administration to fund it have seen this all before. It is scientization of politics, where journalists with an agenda frame good things as bad - when their political party is not in power.

And the boom in listings didn't help. Despite getting $2 billion in taxpayer funding a year, and that's without the land acquisitions costs, fees, penalties, and settlements landowners are stuck with when they lose to the government, it has not helped endangered species much. Almost all species listed are either static or still in decline. That is because the solutions offered do nothing to prevent the root cause of extinction, which is nature. There is a reason we don't know anything about 99.9999 percent of species that ever existed.

The new editorial, in a journal unsurprisingly run and staffed entirely by Democrats, calls for more scientific rigor and transparency than they believe Republican had, but by advocating for estimates stretching out to 2100 to take the place of data, they want no science at all under the Biden administration.

That's not good for the environment and it's a disaster for public trust in science.