Hank Campbell
Try to imagine a world where people though wild lettuce was a status symbol and superior to lettuce grown on a farm; a salad would cost $400.

That is the problem with salmon. Elite customers want to know a laborer sweated for it, they insist if it is farmed it must be inferior but unlike organic certified pineapples or non-GMO rock salt, the naturalist fetish has real world consequences when it comes to the sea. Salmon are getting smaller, because they are spending less time at sea before being caught.

A recent analysis looked at Oncorhynchus kisutch (coho), O. nerka (sockeye), O. tshawytscha (Chinook), and O. keta (chum), and found that it is not just anecdote when locals say they are smaller. Data consisting of millions compiled by the Alaska Department of Fish and Game during the years 1957 to 2018 found that they are getting smaller, but it isn't just due to over-fishing. The naturalism fetish has meant more fisheries growing popular pink salmon in the wild - yes, you can farm salmon while still claiming they are wild that way. And overstocking of pink salmon is driving others out because their food is finite. 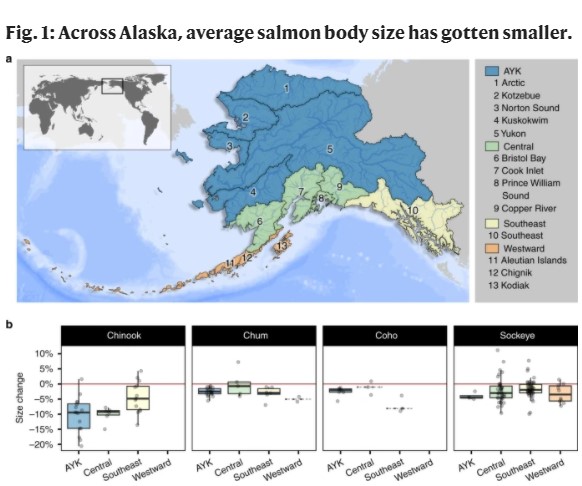 If you aren't familiar with salmon life cycles, they are born in freshwater, go out to sea, and eventually return home to spawn. The less time they spend at sea, the smaller they will be. This has impacts not just for our own consumption, but their place in the food chain. They move nutrients around, spread some fertilizer while doing so, and become nutrients for other creatures.

But when they face increased competition for food, they return to spawn younger...and smaller.

The authors say they don't know what the factors are in the decline. Everything will be blamed on global warming or COVID-19 if you want to get published in 2020 and there is no evidence North Pacific coho were being sold in Wuhan wet markets last year, so climate change gets the mention, but it's not even going to be close to reliance on wild salmon for wealthy elites. Farmed salmon don't have this problem, there could be as many as people want if Manhattan and Los Angeles stopped believing that a Deadliest Catch show was being filmed so they could have a $30 meal.

They also note it could be evolution - the perils of the environment and descent with modification to get ahead of nature trying to kill all of us leapfrog each other - but that's also an issue science could fix. There is zero chance cows would still exist if humans had not farmed them.
Science 2.0
More Articles All Articles
About