Americans Were Surveyed About Subway And Megan Rapinoe Taking A Knee - Here's What They Said
By Hank Campbell | August 17th 2021 08:14 AM | Print | E-mail

Hank Campbell
Subway Brand Ambassador and soccer star Megan Rapinoe kneeled during the national anthem at the Tokyo Olympics and Twitter did what Twitter was designed to do and went into spasms, despite that being about as edgy and controversial as endorsing clean water in 2021. Subway still had reason to worry. How will it affect sandwiches?  That is what they need to know, because selling sandwiches to 2 Democrats and 2 Republicans is better than selling sandwiches to 2 Democrats, no matter how you spin the math.

Brand research company Piplsay surveyed 30,790 Americans and found out that not much will change. Coming in on the outrage side were 38% and coming in on the support side were 36% while 26% were unsure what opinion to have on soccer stars selling them sandwiches.

None of those are a surprise. I could survey 30,000 people asking if they like cats and get about the same result. There are always going to be fundamentalists about this stuff. On one side will be people who demand that Rapinoe be allowed to do anything she wants if it agrees with them and on the other that she be fired if it doesn't agree with them.

But how important is it really? This is something always missing in surveys. Companies will produce, and executives will take, absolute numbers and make decisions based on that without being able to weigh the severity. Only 19% say on surveys they would actually boycott a brand and there is no idea how many actually would. If you like Subway sandwiches, probably not. Boycotts are primarily for the young, and people who own a lot of cats. 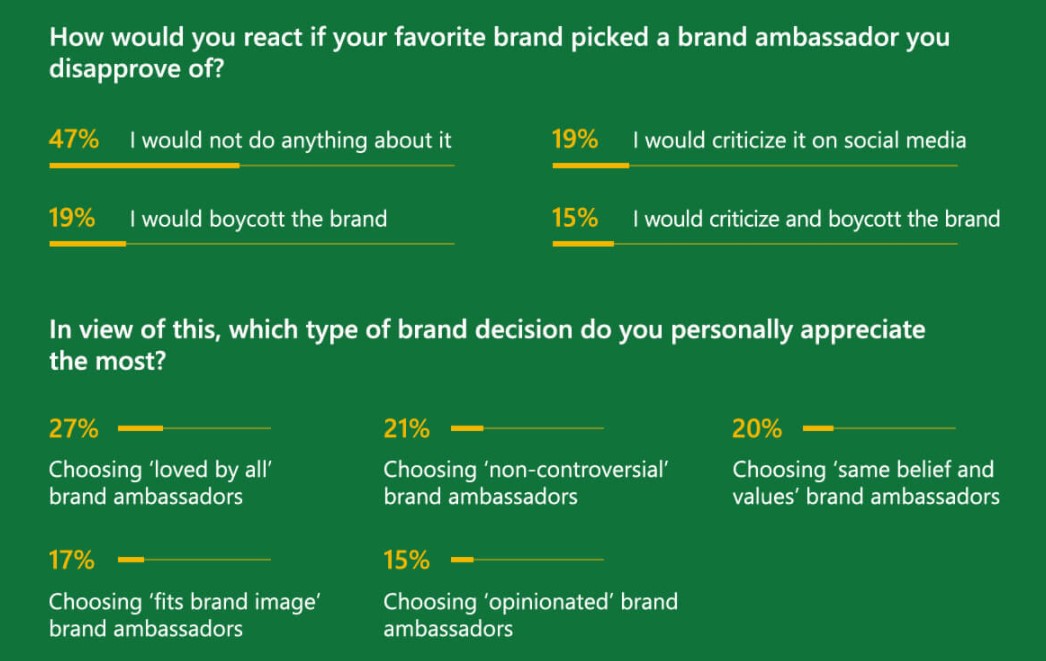 The key question for companies in any ad campaign is does it 'move the iron'? This is a paraphrase of an old automobile executive who was unimpressed by an ad agency that wanted to create an award-winning campaign. Car companies want to sell cars, not win advertising awards. Subway wants to sell sandwiches. Are people who are cheering Rapinoe already buying their sandwiches? Then all that needs to be considered is if they are losing sales to people who dislike her stance.

Some day we may call this the Cheerios or Manwich Conundrum in business schools. Were executives engaged in confirmation bias when they made product decisions? When Conagra decided to remove BPA (a plastic lining in use since the 1940s that prevents spoilage) due to hype about it being a non-specific, biologically-baffling "endocrine disruptor" in overdosed rats and marketed that decision, sales went down. It turned out that some people who bought Manwich wondered why the company had been "disrupting" their hormones since 1969 and bought less, and anti-science hippies didn't start buying it just because it no longer had a BPA lining. The same thing happened with Cheerios when they announced they were going "Non-GMO". Coastal elites who care about that kind of virtue signaling still didn't buy that processed cereal, they still drove to Whole Foods in the Prius with the Obama sticker on it bought steel cut oats and made their kids miserable with those.

The only choice Subway has to make is what will now mean the least worst outcome? If they determine that their base is outraged and buying fewer sandwiches they will learn and accept that cooler heads not engaged in virtue signaling would have chosen someone less political in the first place. There is no world in which 'all publicity is good publicity.' The only people selling that nonsense belief are publicists who make just as much money putting out fires as starting them.

Most likely, outside the social media department that most CEOs now regret making a C-level position, nothing will matter at all. Yet if these results hold up, there is good news for the future: Gen Z are less likely to make any decision based on a brand ambassador than Millennials or Gen X, which means they are a lot less educated by advertising and outrage media. And that is a very fine place to be.
Science 2.0
More Articles All Articles
About