Hank Campbell
In 2012 we had an uneventful election which was so easy to predict absolutely no one neutral got it wrong. But it was heralded as a victory for scientific polling and a new era for predictive analysis.

But it was really just an incumbent with a placeholder opponent. Every poll nearly ran the table predicting the states President Obama would win. I even lost a bet to science journalist Razib Khan because he correctly stated that the American public was even more predictable than I believed. I was so confident that the battleground states had not been decided before election day I even spotted him an extra one, meaning three battleground states had to defy polls, which is how I lost. I had, of course, accurately predicted the winner three months earlier, almost all of the individual states were in the bag long before the election. I was betting on the margins. Even a bookmaker in Europe got the 2012 state results accurate. And that is just Europeans placing bets. But it was not more accurate because of scientific polling.(1)

In 2016, the shine was off the 'secret sauce added into simple poll averaging' rose. An 83 percent chance for Clinton winning while only 20 percent for Trump turned out to be ridiculous. Any poll that said Trump could win was dismissed as partisan hacks.  But I knew then what I knew in 2012. If polls were scientific, they would be more accurate in Congressional elections that were not dominated by an overwhelming incumbent. And they had never been. 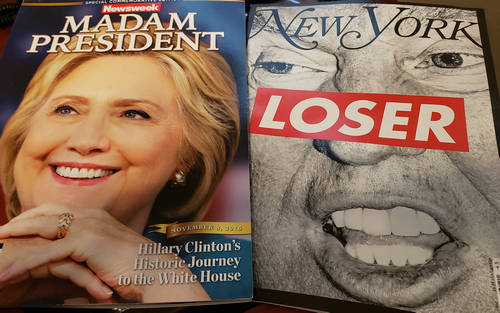 I lost a steak dinner on this election, making it two elections in a row where I overthought it - the exact problem bad gamblers face. Though I lost the bet (again) I had my assistant go out and acquire these magazines written by other loses. Photo credit: me. Please link back here if you use it.

Yet when it came to the Trump result, though there were a few claims about European bookies losing large individual bets, bookies did not lose money. They really can't, because they have odds compilers who are there to offset risk by setting the right bet prices - the viggorish. And that is based on how even the betting for each outcome is.

When it comes to heads and tails, for example, a bookie is setting odds that slightly favor them, but they still look good to an individual bettor - a 90 percent return. The goal is to have things as close to even as possible. When they go out of balance, the odds change.

An individual bookie may lose big, but only if they fall prey to the gambler plight of betting on emotion. A company has no worry about that, they are changing betting lines in real time to balance the book. They make profit on the vig, not on what wins or loses.

Bookies believe in the wisdom of crowds. In the 2016 election nearly 70 percent of bets were for Trump but 75 percent of the money was on Clinton. You can see how it was possible for betting agencies to win either way in that scenario. I believe in the wisdom of crowds too, even if it is Europeans who know nothing about American politics or sports.(2)

So when European bettors say Jay Gruden is likely to be the first NFL coach fired, I believe them, and when they say Bill Bellicheck is untouchable unless he's found in bed with a dead teenage hooker, I agree with that too. I am not betting against them even though the prize is nearly 200 percent over my bet. If I had to bet, and you never do, take the small prize

But would I bet on the Dolphins being the worst team in the NFL before a pre-season game has been played? No, there is a much different level of insight when it comes to the fortunes of one person who has a temperamental owner versus the ability of random people to guess the outcome of 53 players on 32 teams before a single ball has been snapped.  Betting against the Dolphins being the worst team feels like easy money.

That's the great thing about oddsmaking. They are happy to have me bet against the Dolphins being the worst team because they have set the odds so that one conservative people will bet for that result and one skeptic will vote against it, while they get a cut. They want the money bet on each side to be as close to even as possible and count on contrarians like me. If the money is even on both sides, no matter what happens they make a percentage, often up to 10. 10 percent is great money. If they actually win big on an event their odds compilers are going to get a stern warning, because that means they could just as easily have lost big. Emotion is for suckers, this is math.

In the 2020 election, Trump is currently a 4:1 favorite and that is because the big money is on him winning - just like it was for Clinton in 2016.  Just like Jay Gruden is a 3:1 favorite to be fired first. In both cases a lot can develop between now and September 8th but when it comes to the Redskins bookies are counting on Eagles and Cowboys fans having victory celebrations against a division rival, which leads to fan anger and calls for a coach to be terminated. That is an emotional bet, just like people who are placing their money against Beto O'Rourke today.

But I wouldn't bet for him either. When there are so many betting against you, it's time to consider that the wisdom of crowds is delivering a message you may not want to hear.

(1) Then, as now, if you tweak the fashion you will get criticized, as Neil Tyson discovered when he noted that media sensationalism leads us to "respond more to sensationalism than to data", a bad hot take when everyone on Twitter wanted to blame Trump for both a white supremacist murdering people in Texas and an Antifa lunatic murdering people in Ohio. He apologized on Facebook, which is less overtaken by lunatics.

(2) Just like if I have a choice between one scientist or mathematician trying to calculate the number of jelly beans in a jar versus taking the average of 100 artists who say they can't do math, I am taking the artists. And 90 percent of the time they'll have the closest answer.
Science 2.0
More Articles All Articles
About