Hank Campbell
After attracting scorn with bizarre classifications of a weedkiller, bacon, and hot tea, the French statistics group known as the International Agency for Research on Cancer (IARC) decided to puncture claims that activists had manipulated the process by doing a flip-flop on coffee. Though they were widely expected to increase the hazard designation from 1991's already bizarre "possibly carcinogenic", they suddenly reversed course and lowered a classification of a product for the very first time.

That arbitrary flip-flop showed how weak their work has become - the same shoddy process that could implicate a product could just as easily exonerate it.(1) Each working group cobbles together hand-picked animal studies allowing five orders of magnitude for exposure (so 1 dose is equal to 10,000) with hand-picked statistical papers, all chosen by equally hand-selected members. In the 2000s, activists essentially took over IARC, by getting rules passed preventing anyone who has consulted for "industry" from participating but not anyone consulting for environmental groups or trial lawyers. Obviously corporations only hire the very best scientists as consultants so IARC became primarily populated by the remnants, or those with an agenda, such as Chris Portier and Martyn Smith.

The system was ripe for abuse and it has been abused. Their 180 degree turn on coffee was evidence they were not interested in science. Though coffee was not carcinogenic, acrylamide, produced when roasting coffee beans, somehow was. And that designation was made shortly after acrylamide was discovered in 2002. Humans have been cooking meat for 50,000 years and somehow we hadn't all died of cancer but lawyers in California lined up to sue. Their big target was Starbucks, McDonald's, and anyone else who sells coffee. 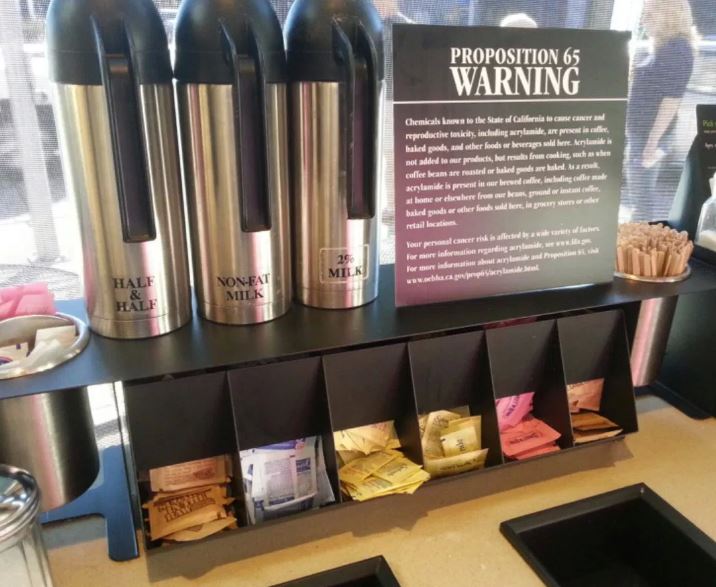 California is the perfect state for these lawsuits because in 1986 voters passed the Proposition 65 (Safe Drinking Water and Toxic Enforcement Act) referendum, which abdicated decision-making to remote centralized authorities. IARC was one of them. If you were on an IARC list, you had to get a Prop 65 warning label. Abuse of that system was a concern 30 years ago (though it got huge voter approval, as a name like Safe Drinking Water and Toxic Enforcement Act would), but at least IARC was looking for carcinogens back then and not inventing them, the way they did when they came under the control of Chris Wild starting in 2009. Now there are so many Prop 65 carcinogens Walmart just puts a blanket warning on their buildings. One California oncologist even sent this Prop 65 warning from their cancer ward. A warning on a white board that it could cause cancer in cancer patients, the one group guaranteed to already have cancer.

With IARC flip-flopping on coffee using the same shoddy secret sauce they used on bacon and tea, it would seem like California had dodged a bullet. Not so. Trial lawyer Raphael Metzger had created an in-house nonprofit he named Council for Education and Research on Toxics (CERT) to be the expert witness for his cause. And his cause was acrylamide. He chosed a figurehead perfect for their goal; U.C. Berkeley Professor Martyn Smith, who got himself into a National Institute of Environmental Health Sciences position, which got him into IARC and who had lobbied for Environmental Defense Fund. With an expert witness who had been at IARC, the stage was set to get a cancer patient to believe coffee (or toast, or any grilled food) had caused their disease. But first the easy money was nuisance lawsuits about Prop 65 violations.

The windfall for trial lawyers had already been in the stratosphere. In 2014, I noted that of the $29 million in Prop 65 label violation fees, $21 million went directly to trial lawyers.  And much of the other $8 million went to groups like CERT, which were puppets of lawyers. It had already generated $500 million in nuisance lawsuits since it was passed, costs which were paid by consumers in California, where a giant chunk of the population already lives in poverty.

Lawyers wanted Starbucks, which had already placed the ridiculous warnings inside its stores (7-Eleven got fined $900,000 before getting signs placed eveywhere) to put warnings on each cup or face a $2,500 fine for each infraction.

California was stuck, the state had no choice but to declare coffee a carcinogen under Prop 65. The legislature cannot bypass it because it was created directly by voters.

Yet California did, using the same capricious thinking that has led to penalizing other products. California's Office of Environmental Health Hazard Assessment (OEHHA) simply chose to ignore one statistical claim by IARC in favor of another and stall for time. Since California is a state that loves centralized authority they needed a bigger entity to tell them what to do if they were going to ignore Prop 65 forever. You have heard of sue-and-settle, where activists find a friendly government agency that wants to enact a regulation but can't, sue that agency, and then the agency settles, creating a law by judgment, with activists pocketing cash in court fees as part of the agreement. In this case, California needed something similar, an agreement where FDA could step in so they could say the federal government was making them do it. FDA Commissioner Scott Gottlieb, MD, arguably the best FDA head of the last 30 years, knew IARC statisticians had produced nonsense and scientists were right and played along. "Simply put, if a state law purports to require food labeling to include a false or misleading statement, the FDA may decide to step in.”

FDA could tear down all of Prop 65 if California continued to scaremonger trace chemicals. California definitely doesn't want that, tens of thousands of government union jobs rely on restating and enforcing what IARC claims, so they have complied.

But that cat may be out of the bag. Congress has taken notice of how Prop 65 is used to abuse the public with nuisance lawsuits. Both the Senate and the House (S.3109 and H.R.6022) are working on an “Accurate Labels Act”, which would prevent state rules - obviously talking about Proposition 65 - from placing warning labels on products just because a secret committee meeting by statisticians in France said so.

If enacted, IARC wouldn't be able to just manipulate some statistics to find a hazard environmental activists want them to find, get it on a Prop 65 list by default, and start suing companies, actual science could overrule the statistical correlation in some mashup of results in mice.

That's for the future. For now, it has to be good enough that in one case, California has decided to stand up to shoddy activism and the trial lawyers who are the only beneficiaries.

(1) Pick almost any product (alcohol, cigarettes, PM10 smog, etc. obviously cause cancer so not those), agree to donate the cost of the research, and we will show it causes or cures cancer. The problem with IARC is they never falsify their own hypothesis, if they agree to look at it, they want to call it carcinogen and pick papers to match. But in reality