Center For Biological Diversity Wants America To Be More Like Communist China When It Comes To Politicization Of Science
By Hank Campbell | August 27th 2019 10:55 AM | Print | E-mail

Hank Campbell
China bans some chemicals whether or not the evidence shows it, and the United States should be more like communist dictatorships, suggests a Center for Biological Diversity blogger in a press release for their latest op-ed in Environmental Health.

Like Andrew Wakefield with vaccines, who had an actual medical degree before he lost his mind, Nathan Donley is a degreed scientist, a Ph.D., proving there is at least one biologist in America who defies the well-established science consensus on...everything. Except global warming, which he knows nothing at all about. Outside that, there is no applied science he accepts. It is all conspiracy theory and tales of corporations in their corporation-y buildings making money while only wholesome lawyers at his employer can stop them.

In his recent editorial, Center for Biological Diversity seem to be lamenting that they were born in the wrong country, America, and they may be right. America leads the world in adult science literacy, in Nobel prizes, and in science output. That makes it a frustrating place for litigation outfits like Center for Biological Diversity who profit from opposing all that science represents.

He doesn't like that, and he really doesn't like that instead of banning pesticides, most products that are older and replaced by better products are simply not re-registered by companies, the same way Sony no longer sells Walkman cassette players. He wants an America more like China, where the government would ban the Walkman. 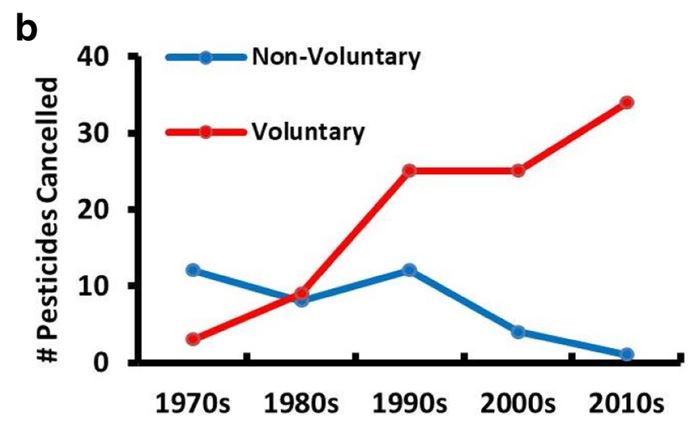 You know you are in environmental Bizarro World when activists complain that companies take products off the market before their lawyers can trot out high-dose mouse models and butchered "secret sauce" epidemiology to get them banned.

Their rationale is that baffling to intelligent people. It can only be that they want to be able to tell clients they got something banned, that it is off the market not important unless they can take credit for it.

Last year, Science 2.0 and Dr. Donley's trial lawyer employers were on opposing sides in the Mississippi Gopher Frog case at the Supreme Court. They wanted to shake down private landowners by claiming the endangered frog should be moved to Louisiana, at a cost of $30 million to the landowners to tear down their existing forest and put in a new one. A friendly sue-and-settle agreement with the Obama administration was making that happen and it was going to send money rolling to Center for Biological Diversity and others but the landowners did not cave in to the implied extortion. They fought it, we helped, and the Supreme Court made a unanimous decision for the science side.

Unanimous. Liberal and conservative justices all agreed that this determination by Fish&Wildlife, to help environmental lawyers, using a hand-picked consultant, Industrial Economics, Inc. of Massachusetts, who never left their Boston office and simply wrote the justification their only client wanted, was wrong. Tearing down a forest in another state and forcing landowners to build up a new one so a frog that lives in Mississippi and is literally named the Mississippi Gopher Frog could have 2,000 acres in Louisiana was wrong.

Yet they always have a new shakedown ready; in this case, teeing up to sue the EPA to ban products if China bans them. It's no surprise they genuflect before communist dictatorships, the term "watermelon" for environmental groups (green on the outside but red on the inside) was coined because their political proclivities were so heavily geared toward centralized authorities they could control with the legal system.(1)

But the rationalization in his editorial is bizarre; American companies voluntarily withdraw pesticides that science can't find harm in, whereas sometimes Europe bans products even if they can't find harm. Just like China. Most often when it competes with a company in their own countries.

It's logical fallacy masquerading as pseudoscience to suggest the regulatory equivalent of 'we must jump off a bridge if our friends do it.'

That is not science, and it is impossible to even argue that China and Europe are environmentally better than America. China leads the world in all pollutants and it dumps 27X as much plastic into the ocean as America. European agriculture causes far more environmental strain due to fear about modern science than America does.

Though Donley hates American agriculture, the truth is if the rest of the world adopted America's pro-science stance toward growing food, farmland equivalent to the entire country of India in size could revert to nature. Not just any land, farmland. Without anyone going hungry.

That is why Americans do not care what Europeans - who banned ugly fruit, tried to bring thalidomide to our kids, and claimed water will not cure thirst - think about science policy.  Not because corporations in their corporation-y buildings somehow control career federal union employees inside EPA. Communist dictatorships have even less value in worldwide decision-making.

I don't agree with every EPA policy and never have, it has been used for political malfeasance like any regulatory agency where leaders are appointed and hire subordinates who will advance their agenda(2), but I don't distrust their scientists. On the other hand, science in Europe is regularly overruled by politicians, as their recent declaration that everything in biotechnology except legacy chemical and radiation baths to create new strains of products (mutagenesis) must be considered a GMO, even if it has nothing to do with GMOs.

Though activists and the social authoritarian progressives who give them money use fuzzy-wuzzy terminology like "we need to show leadership" about banning everything, there is no leading in that, it is being a follower.  America leads the world in science and agriculture and just because Center for Biological Diversity hate both is no reason to change. It is instead a reason for Europe, China, and Brazil to enter the 21st century.

(1) Lost on them is that Center for Biological Diversity could not even exist in China. They'd be in prison for promoting dissent.

(2) Like a sue and settle agreement with the American Canoe Association to declare water a pollutant for a stream in Virginia. They pretended it was about "benthic impairment” when it was really about their pastime. EPA prearranged a settlement with them and attempted to stick Fairfax County with a $500 million bill. It was one of the few times Democrats and Republicans were both outraged and teamed up to put a stop to it.
Science 2.0
More Articles All Articles
About