Hank Campbell
With coronavirus all over media and politicians looking for ways to leverage concern into votes for their political party this November, a number of parents will want to take their children to a doctor at the first sign of a cough "just to be sure" and doctors say that's a bad idea. It burdens a health system that could be overtaxed if aggressive projections about the impact of COVID-19 come true.

Those parents are not being rational, doctors will note, most kids will not be harmed by it any more than they would a bad cold or flu, and yet the American medical system is overrun by "defensive medicine" that engages in the same behavior.

Defensive medicine costs taxpayers more in higher health care costs than malpractice, because it is designed to head off malpractice lawsuits. If a patient demands a test for Condition X and a doctor refuses to run the test, and the patient later gets Condition X, there are lots of lawyers who will be calling the patient to say they should "hold corporations accountable" - by making lawyers rich. There are numerous things that hospitals and doctors do just to check off boxes because if they don't, and anything happens, they're going to be in the news after a malpractice lawsuit.

Cesarian sections during birth, named after the Roman general before he became Emperor of Rome, have increased in prevalence due to concerns about lawsuits. At the first sign of a problem, they say, doctors will go surgical. That has a twin blade of danger for medical professionals. Former Senator and 2004 Vice-Presidential candidate John Edwards quite literally made a fortune suing over these; given the nature of the procedure, a jury was going to give him a win whether the procedure happened or not. He could blame a doctor no matter what.

Soon enough, it was said, decisions were not made by medicine but by lawyers heading off other lawyers. More c-sections have been performed than would be medically valid in the gray area, because the lawsuit costs over doing them will be higher than the lawsuit costs when they are not, it was believed. And lawsuits do creep into everything; 74 percent of obstetricians and gynecologists will face malpractice claims by age 45.

These errors of commission lead to less treatment of patients, find economists in the Journal of Empirical Legal Studies, a result in defiance of lawyer claims that they are overused.

What if there were no lawyers controlling medicine?

Trial lawyers who 'sue and settle' doctors and hospitals have lobbied aggressively against the U.S. military because in the military your health care is free, but soldiers who use it cannot sue. With millions of veterans in the country, and a federal government with virtually unlimited money, allowing veterans and soldiers to sue over health care while in the service would be a fantastic pool of wealth.

Until they get that pushed through Congress, the Military Health System has data which can show what medical procedures would look like without concerns of defensive medicine, what the authors call a "natural experiment."

From 2003 to 2013 there were 1,016,606 births in military families and of those 56 percent were at civilian hospitals (military personnel don't have to use military medical facilities) and 44 percent were on base. Data show that instead of doing fewer c-sections without lawyer-driven protocols do not tell military doctors what they must do, the data show they actually performed slightly more C-section operations; nearly 4 percent more over a 10-year period. This was despite the fact that a civilian doctor will receive more compensation for performing C-sections, which the conspiracy-minded take to mean they will perform more of them. That is also in contrast to belief that doctors will always do too much because of concerns about sued. At least when it came to childbirth settings, doctors practicing defensive medicine did less.

Doing more without liability immunity had no negative effect on patient outcomes. 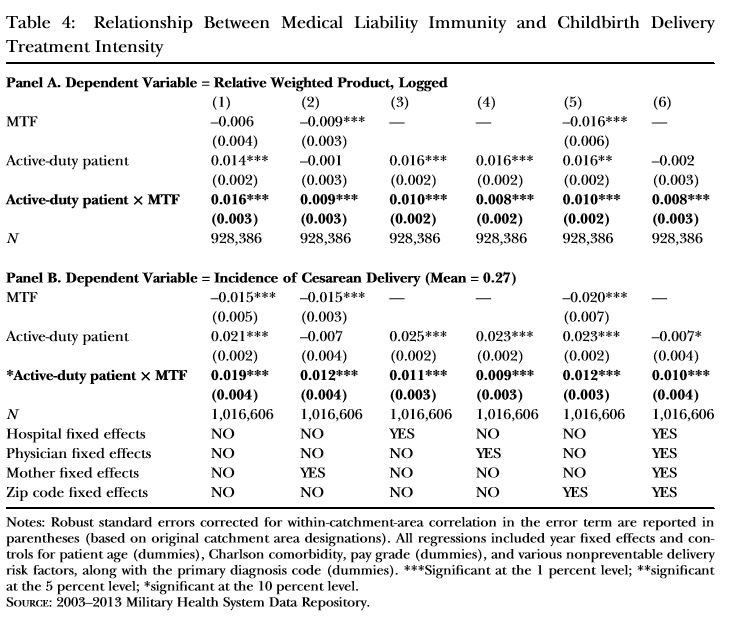 In malpractice lawsuits, 78 percent of all claims fail to find fault, but that doesn't prevent a lawyer from claiming a doctor has been 'charged' with malpractice.
Science 2.0
More Articles All Articles
About