Hank Campbell
A few years ago, a study claimed that in gender blind symphony auditions, women scored 30 percent better. Harvard gender studies authors concluded that there was gender bias in hiring and that was the reason for a gender gap in symphony orchestra compositions.

Implicit bias claims had reached their apex. We're all prejudiced, implicit bias proponents claim, it is only a matter of degree. Or was it only wishful thinking by social scientists? Peer review of the methodology couldn't conclude that sexism was rampant in symphony choices at all. Yet it got media attention by science journalists who often don't or can't understand what they are reading. Peer review in the original publication is no defense, since its flaws are well-known and gender studies proponents peer reviewing gender studies claims have implicit bias of their own. Appearing in a low impact journal is also not the problem. When PNAS was not running claims about weedkillers used on golf courses turning frogs "gay", they were lending their brand to bizarre claims that female-named hurricanes cause more damage because men are sexist.

Yet a female hurricane name is at least obvious. Have you ever liked a piece of art less when you found out the painting was done by a woman?

I have not, art is art and I can't tell you who painted one of my favorite pieces despite it being in my living room for a decade. Yet some believe there is implicit bias in art purchases and that discourages women from entering the field at all. A new paper finds that over 96 percent of all artworks sold at auctions worldwide between 2000 and 2017 were by male artists. Conclusion: auctions prevent women from entering the high-end art market. 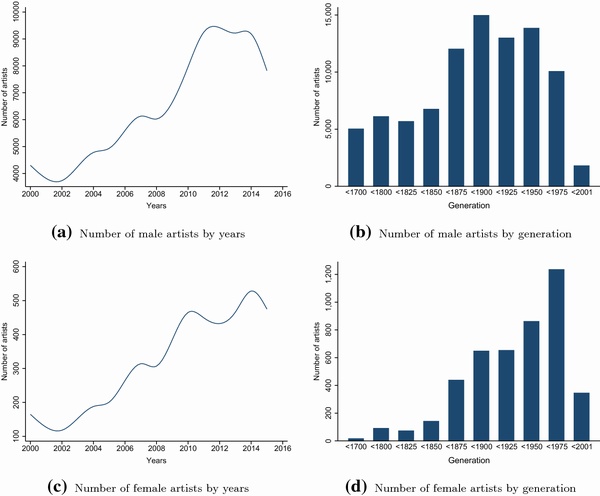 You sell artwork if you are good at art just like you did not even get an audition for a symphony unless you are already a great musician. You cannot practice your way to being a great musician, only a functional one.

The real confounder in the paper: women receive a higher average price for their artwork.

How can it be sexism if more women are getting more money for their work than men? It may just be a statistical wobble - that over the last few years at the $1 million and up level, art sold by men since the year 2000 was 18 percent higher than those by women.

If women have higher average sales, but men dominate the very top, then it means men also dominate the bottom. So the argument could be made that for a man to succeed, he has to be better than a woman with the same skill level.

It may also mean female artists should be paid less if fairness is the goal.

As comedian/actor Rob Schneider put it: “I, Rob Schneider, will no longer take projects that do not pay women equally. Even if that means lowering the woman’s salary substantially.”