Hank Campbell
About 300 year die each year due to heat, but if you look at the statistics of heat deaths another 300 list heat as a "contributing" cause, which means something else killed them but heat may have made the thing that caused the death more likely.

Though a 100 percent increase seems odd, that heat as a contributing cause could be a factor is not a surprise.

What about when that number doubles again to 1,300 and the story becomes that climate change deaths have increased by 400 percent? Is that a sign we are getting better data or a sign that government epidemiologists want attention?  That actually happened. They simply claimed they had a gut feeling that numbers were under-reported and wrote whatever they wanted to write.

That is the concern when we see statistics claiming that runaway alcoholism is causing twice as many deaths in America as in the past. The paper was published in a journal which very much needs to create alarm about alcoholism, aptly titled Alcoholism.

The journal claims it is clinical and experimental research but the paper was nothing of the kind.

Used as an exploratory tool, epidemiology is valuable

I am not a drinker, never have been, and I can't imagine how much money that has saved me. And alcohol is a class 1 carcinogen, that was even determined before the French International Agency for Research on Cancer (IARC) was hijacked by activists and threw out all of the people with real expertise. Still, even though alcohol is an addictive chemical that companies turn into flavors to appeal to more people, Chardonnay shouldn't be banned.(1)

Repeating stories that have this kind of suspect statistical correlation are going to create new calls for bans and that does the public a disservice. And they undermine trust in quality epidemiological findings.

The public culturally remembers Prohibition, now officially 100 years old, and its many failings, while the food activism community has been modeling itself after it with ban-happy calls to action on every product they happen not to like.

Like in the heat-related deaths example above, a bunch of people writing whatever they want on death certificates is not science.  Drunk driving deaths, the second-greatest killer, did not go up? That makes no sense.  It is a confounder because that is the one verifiable thing. Many of the others are just picking and choosing. 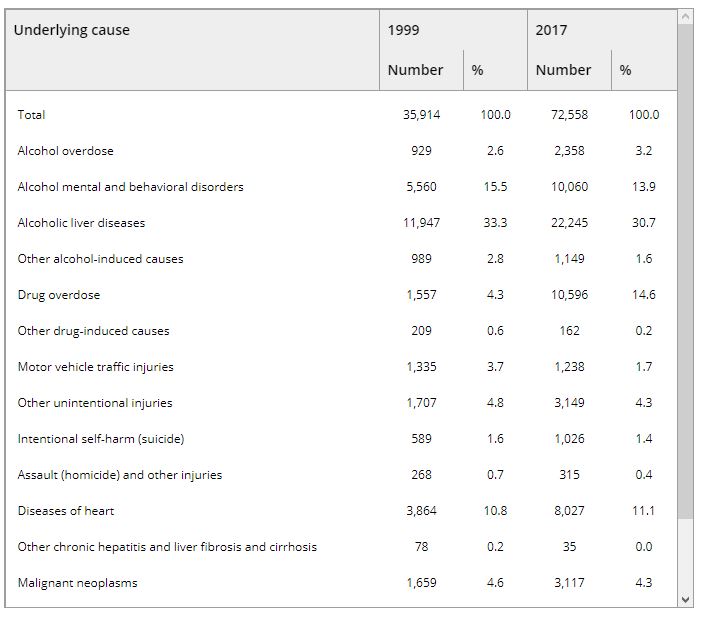 Carrie Fisher, the bestselling author and actress who famously played Princess Leia in the "Star Wars" franchise, only died once, officially due to a heart attack, but contributing causes were cocaine, methadone, opiates, sleep apnea, and, yes, alcohol. Her death "due" to alcohol is also in the results above.

By parsing out alcohol that way, the authors can suggest, and journalists will repeat, that alcohol is killing more people than all other drugs combined. We don't need to get rid of fentanyl and heroin and guns, just ban wine and beer and a fantastic number of people would be saved, that means.

Except they wouldn't. Almost all of them would still have died from other things. The real things that killed them. Carrie Fisher would still be dead if she hadn't taken a drink on the plane but are we to believe that it bioaccumulated over time and pushed her over the edge whereas all of the illegal drugs were minor factors?

Let's imagine if Anti-Vaccine Magazine looked at statistics and "noted" that 96 percent of young people who died had a vaccine. Then they separately note a lot more people are vaccinated now than there were 60 years ago and so correlated twice as many deaths with vaccines by making those a contributing cause. I hope most science journalists would see through that. Yet journalists don't seem to be reading 'contributing cause' and realizing that it doesn't mean more people are poisoning themselves with alcohol, it simply means alcohol is something people report doing, and with smoking in freefall alcohol is taking its place as an easy contributing factor in death certificates where it did not cause death.

You could also do that with "endocrine disrupting" chemicals, noise pollution, weedkillers, or any other lifestyle factor. You won't be able to get those papers published in Alcoholism magazine, of course, you'd have to go to Environmental Health Perspectives or somewhere else reliable for that sort of shady statistical business about other chemicals.

Smoking is dying, but not before 'third-hand smoke' brought us peak hysteria from epidemiologists

If you die in a car accident after drinking a glass of wine, did the alcohol kill you or the car accident? Yes to both, in statistics, though only one person died numerous 'contributing causes' can be checked off. That is how a lot of deaths, including opioids, are able to also list alcohol as a contributing cause.

That space used to be occupied by smoking.

In the early 2000s, Albert Einstein College of Medicine epidemiologist Dr. Geoffrey Kabat was vilified for writing the kind of science paper epidemiologists are supposed to write. He showed conclusively that second-hand smoke, which became the big "contributing" killer as smoking declined, was not killing anyone at all. Though no one was able to show any flaws in his paper, activists in the academic community demonized his work.

I am obviously not saying smoking is anything but a killer, and second-hand smoke is both annoying and an infliction upon people with respiratory issues. What I am saying is that by creating huge umbrellas for serious problems, like smoking or alcohol or obesity, but then rushing to embrace any paper that might advance concern, is a bad idea. The public will not trust science if scientists start to become activists and set out to frame their research to "make a difference." The National Institute of Environmental Health Sciences, once an esteemed group within NIH, is now reviled by the science community, because they set out to correlate everything to diseases. They're the ones who publish the Environmental Health Perspectives journal mentioned above, which will promote anything if it can statistically suggest something common is harming us.(2)

Both of my parents smoked. Though only 10 percent of smokers get lung cancer, which means a whole lot of lung cancer happens to non-smokers, if I get lung cancer at age 80, it can be blamed on second-hand smoke. Or maybe alcohol - my father drank, so epigenetics can check off a box. Or maybe my microbiome, because when you appear on TV you are in makeup and a study just linked makeup to cancer. Though I would be one cancer incident, the number of groups that can claim the thing they are raising money fighting caused my death is so large it could be seen from the ISS.

Though it resurfaces every few years, third-hand smoke remains on the kooky fringe of epidemiology. It was too bizarre to be taken seriously. Yet when it comes to endocrine-disrupting chemicals, epidemiologists use warmed-over homeopathy to correlate the presence of even a molecule of a chemical in urine to disease outcomes.

What's worse is that epidemiologists are uncritically accepting any mention of alcohol as a cause, and even assuming alcohol-related deaths must be under-reported.

The awkward four word question: Where are the bodies?

There are no more deaths happening due to alcohol now, and yet double are being "linked" to alcohol. Alcohol and smoking are the two prime carcinogens we can opt out of but as smoking has declined alcohol has taken its place as the darling of the statistical community.

In the real world, America's heaviest drinking state, North Dakota, drinks less per capita than Spain's most Puritan teetotaling region. And the drinking age in Spain is 18. Yet Spanish epidemiologists have not sounded the clarion call over alcohol-related deaths in Spain.

There is a simple reason for that. They are not paid to create crises the way American epidemiologists are.

And the payment seems to be good. When a series of papers were published in Annals of Internal Medicine showing that vegetarian-activism by Harvard School of Public Health, True Health Initiative, etc. were not improving health outcomes, those groups tried to get both the Federal Trade Commission and the District Attorney in Philadelphia to launch an investigation. They tried to claim the whole panel was biased about meat because one of its scholars had gotten a grant years earlier from a non-profit to study sugar.

They were circling the wagons around their political beliefs about food. And their money.

That's not science, and we'd be better off if journalists had never reported their claims uncritically in the first place.

And that is the same issue we face as articles using one lifestyle factor begin to be over-represented as "contributing" factors. The lawyers at Center For Science in the Public Interest tried for decades to claim that any trace of alcohol can cause breast cancer because high doses can cause numerous diseases, and they got politically allied journalists at the New York Times to write hit pieces on any groups that debunked their claims.

The generation of epidemiologists coming up now is going to be better off avoiding the aggressive evangelizing done by their elders in the field.

(1) Yet you might conclude that it does need to be banned because white women have seen the biggest surge in deaths where alcohol was listed a "contributing" cause, which media attention made sure to highlight.

(2) Tobacco Free Kids and the rest were unable to get a new "master" settlement windfall for second-hand smoke deaths, so epidemiologists turned to "third-hand" smoking to make their net a lot wider. With third-hand smoke, you didn't even need to inhale. Small micron particulate matter, the stuff you can only detect with an electron microscope that California splashes up on pollution reports anyway, particulate matter than lingers from smoking, like on furniture or sidewalks, or on the clothes of smokers, was leaping into our bodies and causing cancer.
Science 2.0
More Articles All Articles
About