Emotional Support Animals - The Ethical Challenge In Signing Off On Them Is Not Being Met
By Hank Campbell | August 7th 2019 07:37 AM | Print | E-mail

Hank Campbell
After California realized that their coastal counties not only led the country in vaccine denial for personal preference, they actually had more than the rest of the U.S. combined, the legislature passed a law eliminating exemptions for all but medical reasons. Sure enough, those same counties where rich white people believed vaccines cause autism suddenly had a surge in medical exemptions. Wealthy people found doctors willing to agree that their child needed a medical exemption even if they were not immune compromised.

Prior to that there was a wave of New York City families who got their child an autism spectrum diagnosis document in order to avoid long lines at Disney World.  They exploited a well-meaning loophole, a case of corporate compassion and inclusivity, for selfish reasons.

In that context, imagine how much easier it has been to get a signature stating that you need your pet with you at all times for emotional support. And getting your pet certified is as easy as getting them certified to "officiate" your wedding. 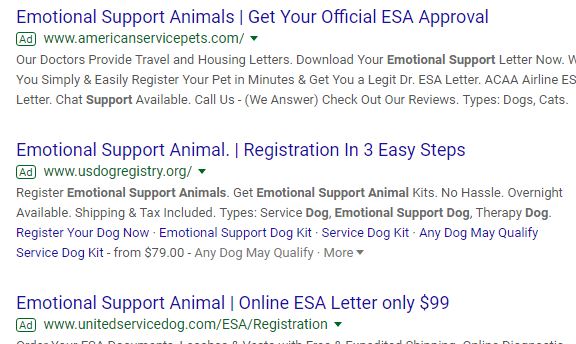 There have long been Service Animals and this new fad exploited the halo that such animals have provided regarding blind people and others. No one wants to discriminate against people with disabilities (1) and with a mental health spectrum that is poorly-defined even in psychiatry - "scientifically meaningless" according to a recent examination of Diagnostic and Statistical Manual of Mental Disorders, 5th Edition (DSM-5) - it is open season when it comes to finding psychologists, counselors, or therapists who will give you the diagnosis you feel you deserve.

Service animals are required to be able to provide a function otherwise unavailable to their owner but emotional supports animals have simply ridden on those coattails. People believe ESAs are held to that standard, but they aren't. There is no standard. And that has led to a lot of abuse. Don't want a peacock next to you in that restaurant? You seemingly have no choice if it's an Emotional Support Animal. Even the New York Times, whose readership overwhelmingly skews toward coastal rich people more than they do farmers and scientists, ridiculed that this trend "fetishizes individual preference" at the expense of common sense and everyone else.

That needs to change and a new attempt at a guideline wants to help accomplish that. If you want to claim you invented a pill that makes you feel better, you need to undergo double-blind clinical trials and show it. Otherwise, you are relegated to GNC supplement land and vague anecdotes. An Emotional Support Animal requires no evidence of any kind, despite it making the same claims.

It hasn't required clinical trials, it doesn't even require a doctor or psychologist to say you need an emotional support critter, you can just get a certification from a pet trainer. And yet dog trainers are not in the business of keeping psychology patients coming around every week, so they are likely to object to a request to have a pet deemed a support animal because someone is moving to an apartment that doesn't allow pets. Dog trainers know that person will just go somewhere else but they don't take the money. How can psychology take a page from that book?

A new paper argues for practitioners to understand the laws regulating emotional support animals, assess those requesting ESA certification, and to assess if the animal is actually doing what a service animal should do, and is not just a pet.

The problem is that it means it's common knowledge that's not being done now. Or practitioners simply choose not to do it. Or they are are so far inside their own expertise they see mental health disorders everywhere.

It can only really change when those in the system want it to change. We are the most over-diagnosed and over-medicated country in the world. 49 percent of Americans have taken a prescription drug in the last 30 days and spending on prescription medication by individuals alone was $329 billion in 2016. More than 25 percent of global pharmaceutical revenue was 5 percent of the population and that's without what hospitals buy. 20 percent of Americans now have a mental health diagnosis, and that is not counting the people who just declare themselves depressed or OCD or an Introvert or whatever.(2) Given those eye-popping numbers we should be all for therapies that cost nothing, like a pet you would have anyway, and that is the rationale for non-medical interventions like a comfort pet on an airplane.

Cheaper, non-medical interventions are great, unless it's a sham and your pet with a certificate is not really trained and is biting people. The psychology community should be applauded for trying to impose standards, even if we have to wonder how they let it get this far out of control.

(1) It happens so infrequently lawyers have to drum up minor infractions of the Americans With Disabilities Act signed by President George H.W. Bush in 1990 to do a smash and grab on businesses using nuisance lawsuits.

(2) Almost a decade ago, I ridiculed the gluten-free fad, which was also among rich white people, because it was going to stigmatize actual celiac patients, and when people assume a medical issue is a self-diagnosed one, it puts actual patients at risk. That is the downside to an emotional support animal fad. There are some people who truly do need one, and they will be lumped in with well-publicized charlatans.
Science 2.0
More Articles All Articles
About