Hank Campbell
A team of epidemiologists who correlate specific types of calories, rather than simply too many calories, to obesity have written a new paper advocating for cigarette-style warning labels on soda.

During the COVID-19 pandemic, disease epidemiologists were concerned that the public did not take their models more seriously, but since most exposure the public has to epidemiology consists of using statistical manipulation to link certain foods to positive health outcomes (e.g. the Mediterranean Diet) or chemicals to negative ones (too many to count, but since Dr. Frank Schnell just wrote about formaldehyde, let's use that) people are right to be jaded. And meta-analyses, combining results of other studies, are too often part of the problem.

Ever since smoking was shown to cause cancer using epidemiology, an alarming number of people in academic epidemiology have seemed more interested in creating the next smoking gun, a new Big Tobacco to demonize, than being trusted guides for the public on real risk. Smoking was a big win for epidemiology, there is no doubt, but claiming soda kills? Because some people drink too much of it and then get fat and then may get type 2 diabetes and then may suffer health consequences? That is not epidemiology, that is linking a treat to a risk factor for a risk factor for a disease, while ignoring the underlying biological mechanism it shares with all foods. It is more like social engineering than science. And the public is right not to trust exploratory claims that use definitive language.(1)

To really drive their point home that their exploratory link - just correlation, no plausible causation shown - should become policy despite lacking a scientific foundation, the authors of the presentation even create fake warning labels using the state most likely to put warning labels on things, California. Why? Perhaps it is done to show up in search results and hope people believe it exists. Perhaps it is so when social authoritarians find out it is not true, they will demand California "show leadership" and make it real.

This is not a real California warning label. At least not yet. Under Proposition 65, which abdicated science decision-making to remote authorities, it is possible, though. It took a special exemption of borderline legality to keep bacon from having a warning label because France's IARC - the International Agency for Research on Cancer statistical correlation group - claimed processed meats lead to cancer. Without doing a single study to show it. Image: Anna Grummon, Harvard T.H. Chan School of Public Health

Their motivation is unclear but one thing is; it is not science, it combines underpowered claims to create overstatement of effects. Combining claims by psychics or astrologers does not prove astrology is real or that psychics talk with ghosts and it doesn't add authority to claims that warning labels on soda will prevent obesity, much less any disease.

Just like we don't know the real goal of activist epidemiology claims like that "virtual" pollution is making you fat or that the chemicals in a pizza box cause more obesity than the calories in the pizza, we don't know what similar "magic rock" conjecture here wants to accomplish. Maybe it is the most obvious thing, just 'follow the money', and the goal is to get into The Guardian or New York Times or other outlets and get a grant. 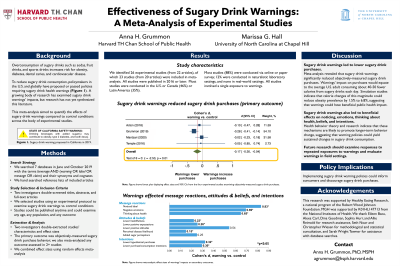 The flaw in their premise is using terms like "added" sugars and "healthy" drinks. The use of "healthy" framing bordering on manipulation, since calorie is an energy term and can't be unhealthy or healthy, any more than our bodies' electrical impulses can be broadly deemed healthy or unhealthy even if their results are unhealthy. To claim a drink can be healthy or unhealthy with equivalent calories is to believe orange juice is exempt from causing obesity while a soda with a vitamin C supplement, the same calories, causes it. That is just wrong.

A paper claiming "emotional reactions" to soda are stronger doesn't hold up very well as a reason to put warning labels on drinks. There is no plausible biological reason why a Coke makes you happier than hearing your brother-in-law talk about his Crossfit/juicecleanse regimen, but I bet on fMRI scans that would absolutely be visible. We don't make health policy based on that.

To the majority of the nutrition community, both juice and soda are treats, neither in quantity is a "healthy" lifestyle. Will a Starbucks Frappuccino have a cigarette-style warning label? Simplistic epidemiology, taking a column of diseases and rows of foods and linking them if they can find statistical significance between column and row (which Harvard School of Public Health is famous for) can show that Starbucks shoppers are healthier than 7-Eleven shoppers. Why not put a warning label on the entire 7-Eleven saying it will cause obesity if we believe that?

Critics charge such arbitrary distinctions, and demand for legislative efforts to address the problem, are classist, since the poor buy more soda than Starbucks lattes. And that they are racist, since Starbucks is visited by fewer minorities. An arbitrary demand for legislation to force behavior regarding some products suggests epidemiologists may think poor minorities can't make decisions for themselves but wealthier white people can. That is not a great look when #blacklivesmatter protests are out in force.

It's not real, it's just epidemiology

That is why most epidemiology claims are in the exploratory walled-off section of science and never become real findings. Their statistical association may be interesting to Washington Post writers, some will even be worth a science follow-up, but when hundreds of millions of dollars in grants are to be had by finding a p-value for some food or chemical and a link to benefit or harm, the field is ripe for exploitation.

There is no science that can show 150 calories from a soda will cause diabetes while 150 calories from fruit will not. It is biologically impossible. I can't tell you the last time I had a McDonald's burger, I have a deer I shot and some elk a friend shot and some bison I bought and I grill burgers using those and beef at my house. But I know my kids have had corporate burgers in the last few weeks. That is okay, the burgers probably have the same calories. Yet using correlation, too many epidemiologists can claim a corporate burger will make kids fat while a burger grilled at home will not. That is Marion Nestle mysticism, not science, and people who believe it need to get out of their office and into the real world.

Food is food. Eat a sensible diet, get some movement going. No one needs government warning labels on soda or any other food to be told that.

Hank Campbell is the founder of Science 2.0, and neither he nor it receives money from Big Fruit, Big Soda, Big Diabetes, Big Tobacco, Big Science, and certainly not from NIEHS.

(1) Our own CDC, under fire recently because the public realized what we have been warning for years - they have not been prepared for a pandemic in the last decade - began to promote a nonsensical pre-diabates classification and spent hundreds of millions of dollars advertising it. It was so arbitrary and lacking in clinical relevance (only 5 percent of those matching the arbitrary a1c blood level get diabetes in their entire life) that the rest of the world ridiculed it and wondered if Big Metformin was behind the epidemiology papers CDC embraced - while ignoring papers that debunked it.