Christmas tree farms don't cause global warming, according to European Union politicians, and that is why Europeans have decided to meet their emissions targets by...burning wood.

You read that right, they have decided to burn more wood to offset the increases in emissions they have caused by closing nuclear plants. Their logic is that wood is renewable. Christmas tree farms prove it. And when they created the international emissions framework they intentionally exempted wood, as long as it was imported.

Renewable energy sounds great but reframing burning wood as renewable even though it is combustion and is more harmful than CO2 emissions from coal makes no sense. Soot is an actual carcinogen, not made-up IARC statistical nonsense. But by using the term "renewable" their voters will think it is superior to natural gas. 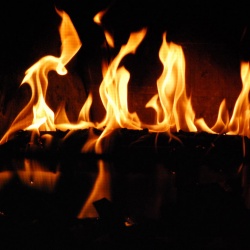 How Europe thinks they can stop global warming.

In the world of physics it isn't. Natural gas is why the U.S. was able to dump the Clean Power Plan. It got little media attention because media seem are in a culture war against fossil fuels, but in 2017 the energy sector met emissions targets that the CPP would've mandated for 2025. The free market did that, no regulations needed.

The developed world would also like to start down the path to cleaner, centralized energy production, but our government has blocked progress for them since 2013 by insisting they use solar or wind. What the developed world really wants to get rid of is burning wood, what Europe is now embracing over the recommendations of 800 scientists.

In a new Nature paper many flaws in the reasoning EU politicians used are noted but I will focus on the two political motivations they masked as science.

1. European voters have bought this nonsense because as odd as it sounds to the American science community, the U.S. actually leads the world in adult science literacy. If Europeans were as literate about science as Americans they would embrace natural gas, GMOs, pesticides, and vaccines. They would know that burning wood takes carbon stored in a forest and sends it right up smokestacks. Per kilowatt hour of electricity or heat, wood is far worse for the atmosphere than natural gas. Wood is fine on a winter day to feel cozy in the living room but to provide energy for even 5 percent of Europe would require cutting down trees equivalent to all their forests. So they would need to have the developing world cut down their forests and ship the wood to Europe on emissions-belching ships.

2. The second reason European politicians pushed for this over the objections of scientists is that wood emissions are exempt from the U.N. Framework Convention Climate Change (UNFCCC). At the insistence of Europe. Countries that burn wood for energy can ignore those emissions in their total, only the countries where the trees are chopped down must count the carbon lost from the forest. The developing world will be penalized on emissions while Europe gets the feel-good fallacy of pretending to have lower ones.This concern was echoed by the European Academies Science Advisory Council . Good luck explaining that to people who insisted ugly fruit shouldn't be sold and that water does not cure thirst.

Imagine if you are a politician in Brazil. Based on Europe's reframing of setting wood on fire as emissions-free, you can declare yourself carbon neutral by cutting down your rainforests and burning them. The emissions are legally offset by each other, even if that claim makes the science community crazy.

The real reason for such a ridiculous move is that Europe has been shutting down nuclear plants and emissions rose sharply. The reality they face is that solar and wind are too spotty to make up the difference in energy they have faced by demonizing natural gas. The choices to prevent brownouts are either more dependence on Russia, which uses fossil fuels, develop their own natural gas industry, or embrace something that they wrote to be outside the legal definition of emissions.

Politicians claim this scheme will be "sustainable" because trees can be regrown, but the emissions go up in smoke in an hour and take 20 years to reabsorb into a new tree.

It's junk science but political salvation. They have found a way to adopt a halo of renewable energy while sticking the developing world with the environmental impact.