Hank Campbell
A new study statistically correlates wildfire smoke to pre-term birth risk. There are a number of confounders in that, of course, like that exposure to wildfires creates a great deal of stress and often hurried actions and those are huge factors, but they instead dredged up a link to something that makes little sense - air quality far from fires. And since they came up with a suitably cosmic number - 7,000 extra preterm births in just 5 years! - it is sure to get attention in a state where everyone hyperventilates over everything.

Want to show organic food causes autism? The curves match, so you can, just like epidemiology can show that red meat both causes and prevents cancer. Ditto for wine and cheese. If a government agency will send me a check, I will show Mexican Coca-Cola prevents cancer while American Coca-Cola causes it.(1)

In this case, the authors gathered all births and then looked at estimates of wildfire smoke and found a 3.4 % increase in preterm birth risk if they believe women inhaled smoke. That word believe is important, as is estimates of smoke. This sort of collation and correlation is the kind of thing a scientist might do at the end of a grant period if they needed something to show a committee. Then they link the births to bizarrely, PM2.5 - particulate matter 2.5 microns in size, so small you need an electron microscope to see it - rather than the actual particles in smoke, which are PM10.

Why? Everyone knows by now that smoke or smog can harm you, there is no need to exaggerate it. Yet as California air got cleaner, the California Air Resources Board began to 'define air quality down' and in the 1990s they began to promote worry about something that was undetectable before - PM2.5.
It made no scientific or medical sense, it is akin to people who hate vaccines blathering about spike proteins when it comes to COVID-19, but California activists, and allied epidemiologists, had an answer for that too. All smog and smoke contains PM2.5 as well, only a lot more of it, since it is 1/4th the size.  Then air quality maps could stay red, even if no one could see or feel the difference.

Like self-diagnoses of 'gluten sensitivity' it only requires using personal narratives over science.(2)

If I created a Von Mises-type scale such as this but used PM1.0 to PM2.0, all of California would be deep red. Yet the air would still be far cleaner than 40 years ago. No one would be harmed. Meteorologists could feel even more important showing it. Think that is bananas? With PM2.5 now being common pseudoscience there is a movement to change the standard to 1 micron.

Using statistics, it was easy to claim that smaller particles killed us just like smoke and smog do. It was even possible to correlate President Trump to 10,000 more air pollution deaths - just by his being elected.

They can get away with it and journalists will jump on it because most don't realize a p-value is only the probability that a result happened by chance. If you watched Trump win the election in 2016 after even scientists with blinders on had declared 'polling is now science' because political allies like Nate Silver predicted easy victories for Democrats in 2012, you know how meaningless p-value is. Imagine how useless it is for predicting how you will die.

Scientists debunked those suspect epidemiology claims that PM2.5 kills people like PM10 does quickly. The final nail in the coffin was a study of 2007 data - the same period when these preterm births are a concern to the authors - which showed deaths actually declined during the wildfires then. 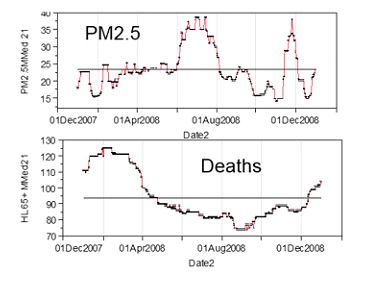 After that, allied epidemiologists pivoted to other risks. Like asthma. That's an easy one. Ask any asthmatic how they feel going into the perfume section of a department store and they can assure you they are more sensitive to air quality differences, but also crazy things like linking PM2.5 to lower test scores in school.

PM2.5 statistical correlation is the same junk science that leads to nearly every product in a Walmart needing a cancer warning label - including the outside of a Walmart. It's why people pay more to have produce grown using 500 percent more pesticides - as long as the toxic chemicals have an organic sticker.

During the lockdowns and controls of 2020, California had far fewer cars on the road in Los Angeles, far fewer planes flying into LAX, far less of everything. Yet "bad air days" did not go down, they even went up. The reason was nature. PM2.5 is everywhere but it makes California activists look ridiculous when real pollution plummets but they are still insisting PM2.5 is hurting us.

Now we have a COVID-19 pandemic and California doctors and scientists are worried that there is not enough uptake for vaccines. Why would there be? Academics spent an alarming amount of their time in the last few decades demonizing and undermining private sector science - which just made the vaccines. The same Big Pharma that produced them was being accused of wanting to get people addicted to fentanyl and rushing drugs to market even after they spent $1 billion and 10 years.

What the Precautionary Principle giveth, it can also taketh away. But if we want people to trust epidemiologists and academics about medical issues today, we have to stop allowing them to defend garbage inventions like "pre-diabetes" and a vaping epidemic. It's fine that we started by embracing Clorox and Lysol - chemicals! - again and the next step is to stop scaremongering what is the world's cleanest air among developed nations.

It is not fraudulent but it is intentionally deceptive to create a chart like this: 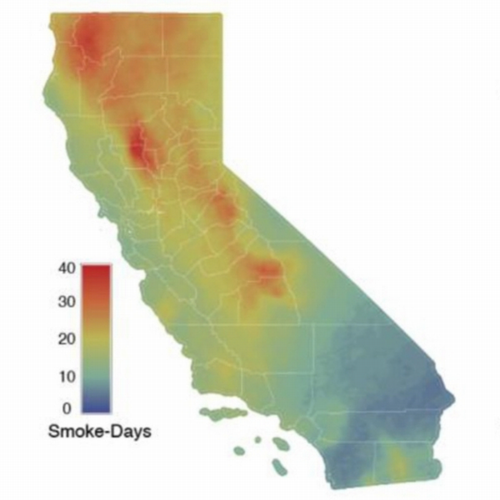 When in actuality the entire US most often looks like this:

(1) Because I have convinced myself that Mexican Coke tastes better due to being made from cane sugar even though after 30 days in the heat it has broken down to its constituents to such an extent no lab test can tell the difference.

(2) Despite lacking a science basis for restrictions, California continues to receive an exemption from EPA and make cars more expensive for poor people while never showing any evidence that it has saved a single life. 'Lives saved' statistical mysticism aside.

What does a more expensive car actually accomplish? People keep older cars longer, which cause more pollution.
Science 2.0
More Articles All Articles
About