Gateway Belief Model: The Consensus On Using The Consensus To Convince People About Science
By Hank Campbell | August 8th 2019 07:30 AM | Print | E-mail

Hank Campbell
Does it work to communicate the scientific consensus to the public?

If anti-science beliefs about energy, medicine, and agriculture are any indication, sure.  We don't get bans on science in the U.S. the way Europe aggressively denies the consensus precisely because the American science community does a great job at talking with the public about data, exporting critical thinking is a big reason we are creating Science 2.0 Europe. European scientists have been impressed at how well we have beaten back ban-happy activists. They want to make positive changes there as well.

That does not mean it will always translate into political action. By now, FDA knows supplement hucksters and organic industry trade groups are engaged in fraud, you only need to read Huffington Post or Mother Jones to see how effective companies are at getting media to help undermine science, and those issues have decades of easily understood empirical data behind them. With communicating the science of climate change, it is trickier because the science is more complex but it's not like there is a lack of awareness, as there is among people who are surprised to find organic food uses chemical pesticides.

While scientists agree on the science consensus, that's what it is after all, there is not so much agreement on how to communicate it. I have one style, others have a different style, and I am fine with that diversity yet once a week someone who claims to be in "scicomm" calls me a Nazi or says I am doing it wrong because I refuse to subscribe to their political motivation or their cultural agenda or their style. Some others mean well and simply think fighting for science is wrong. I even wrote an article about it, If Our Science Tribe Was A Dungeons&Dragons Campaign, noting that it takes soldiers, diplomats, educators, and explorers together to make it all work. Anyone who claims their way is the only way is being hypothetical, they are surely not successful. If there can be one agreed on thing, it might be that focusing on science needs to be our First Principle.

At Skeptical Science, John Cook has an article listing the literature supporting the consensus about the Gateway Belief Model, which "finds that communicating the scientific consensus on climate change increased beliefs about climate change, which subsequently increases public support for climate policy." 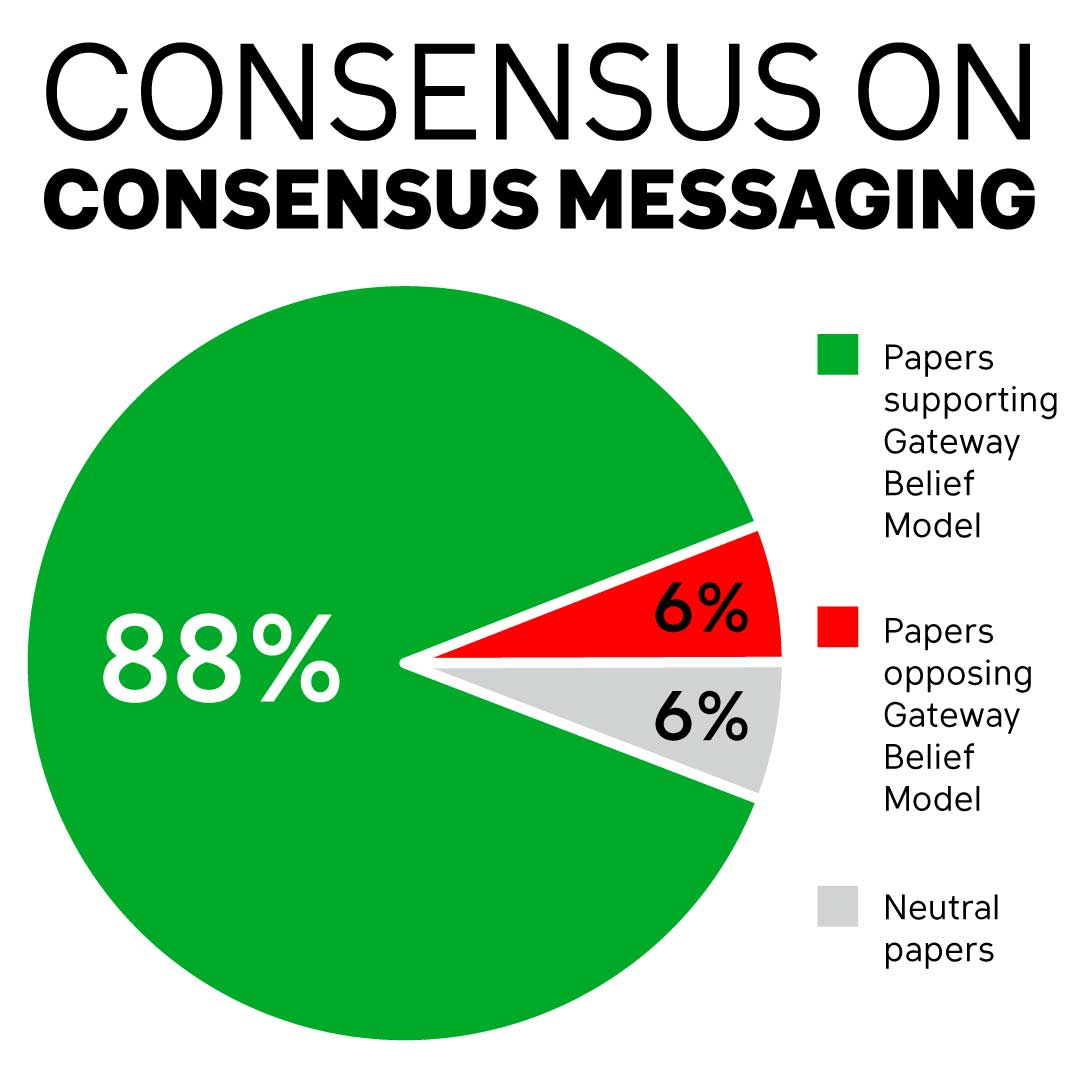 It makes complete sense there would be a consensus about communicating the consensus. If people used it and it worked more than once they naturally think it works, that is the difference between cargo cult science and an experimental method. But the people on our side on science issues are on our side, and the people who may be unsure can be reached, but action can get blocked by people in opposition.

How much value is the gateway model in chasing the entrenched fringe? If I try to convince journalists Danny Hakim or Eric Lipton at the New York Times about the science consensus on food, they will say they don't deny science, they instead argue there is a corporate conspiracy. Most people who deny science don't overtly deny it, they instead say they accept opposing science, or believe there is an agenda beyond science, such as a corporate monopoly or deep state control.

Will the gateway belief model work for them?  It hasn't so far. But neither of those journalists deny climate change, and that is the problem with allowing journalists to accept only one consensus while dismissing the rest as 'not my issue.' If the public thinks the consensus is only to be trusted on one science, or is determined by the editorial skew of a newspaper, it undermines acceptance of all science.

Cook lists two papers that don't think the consensus model of science communication works, but one specifically focused on global warming denying conservatives. This is like asking vaccine denying progressives on the California coast if showing them more slides about health outcomes will convince them to protect children. It does not, they conflate consensus with conspiracy. We had to pass a law to force them to vaccinate their kids in Marin, Berkeley, and LA, and then those parents rushed to buy medical exemptions anyway. It does not mean the method does not work, it means we can't get wrapped around our intellectual axles worrying about one crank isue.

We're not going to ever reach everyone, there are still people who claim the earth is flat and that GMOs will ruin us and there is no point in trying to change their minds, we just have to limit their control over decisions.

But the science has to remain front and center. Yes, we need to be creative, and yes we need to understand that we don't choose the narrative, the public does, and sometimes that means it's a values issue and not data. But the science has to be the foundation or else we're just like the people on the other side.
Science 2.0
More Articles All Articles
About