Hank Campbell
Have you been told you have a greater risk of heart disease based on family history? What does that even mean?

It was only 40 years ago that epidemiologists still denied there was any genetic component to risk factor diseases like cancer at all. They believed it was all lifestyle and our environment. Even now absolute and relative risk are used so casually and interchangeably that people think everything causes cancer or heart attacks. Tea, bacon, weedkillers, you name it and someone at International Agency for Research on Cancer alleges it will cause cancer without any input from chemists, biologists, or toxicologists.(1) In biological reality the biggest risk factors for cancer are age and smoking. Bad luck is third. Yet if your goal is to manipulate statistics to get an expert witness contract, like Chris Portier at IARC, you can do link anything to cancer and say it's data.

What about heart disease? While doctors will always ask about family history now but risk remains tricky. Jim Fixx, who made running a craze, died of a heart attack at age 52. Did running cause it? Other lifestyle issues? Genetics? Bad luck? Sure. You can statistically correlate any of those.

Yet genetics are the most likely factor, what remains trickier is creating meaningful risk. Anyone can say 'don't eat bacon' and if you don't have a heart attack tomorrow, you can believe not eating bacon preventing it, but that is more magical totem than scientific approach to health.

A new paper looked at the genome sequences of 25,892 Japanese heart disease patients and identified 48 genetic loci associated with increased susceptibility to coronary artery disease. The problem; that is a lot. The bigger problem; 8 were previously unknown. Adding more loci is great science but terrible for public health protocols. Risk is already vaguely meaningless but if we tell people they have one of 48 genes and therefore need to do...something...will lead to nothing. 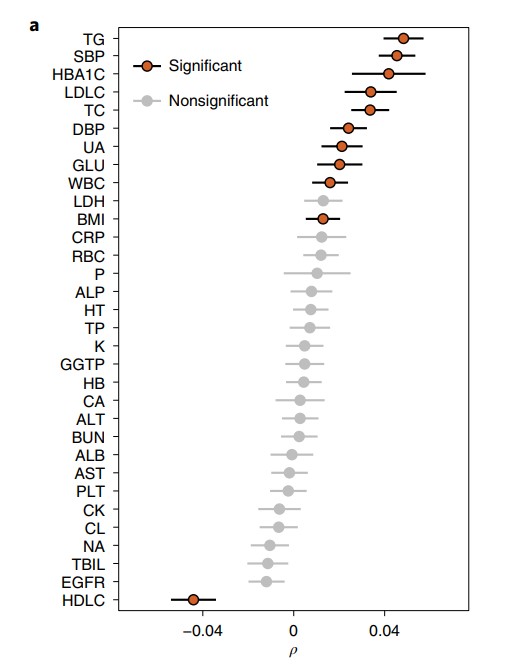 Correlation between CAD-PRS and continuous clinical indices. Data are presented as Spearman’s correlation coefficients and their 95% CIs.

Before it can be clinically relevant, it has to have plausible biology. One gene had an effect on cholesterol metabolism, for example, but outside the supplement huckster movement, that won't inform actual risk. Another was the target of statins, but that is also a case where they are reducing risk, but no one can say how much.

That doesn't mean the study has no value. While occasionally science is still revolutionary, such as CRISPR-Cas-9 genetic engineering, most often it is evolutionary. It is incremental and slow. Most of it will fail. The end result can still be good. We have been studying mitochondria, our cellular energy, for 100 years, and antioxidant nonsense aside, once a big breakthrough occurs we will be able to live better. We won't live longer but we will, as I discuss in a book on mitochondria in progress, "square the curve" - rather than having a decline and increased infirmity beginning at age 80 we will be able to stay active far longer and then mortality will happen quickly. Yet we'll have been better off for decades.

That's a good future to work toward, it just takes time.

(1) That does not mean it does. It simply means a committee of hand-picked members - anyone who ever consulted for industry is banned from participating but consultants for environmental groups suing industry are allowed - look at hand-selected papers, including their own, and average out their results to "correlate" useful chemicals or ordinary food to some disease.


Science 2.0
More Articles All Articles
About