Hank Campbell
When "Guardians of the Galaxy" was in development, I was skeptical. When I was a kid, they were simply different Avengers, in space. Seriously, they had a Major from America, an archer, a strong guy, etc. And everyone knows Marvel had sold off the movie rights to the popular characters to prevent bankruptcy so they had only B level characters left.

But one of those B-level characters was Iron Man, and Jon Favreau, Robert Downey, Jr. and a whole team of four writers (usually a bad sign) turned in arguably the best superhero movie of all (1). And it just so happened other B-level characters made up The Avengers, and a boom was born.

But once they announced plans to roll out every character in their roster it was wise to be skeptical. I saw the trailers, still unimpressive. But a month before it debuted I started to think it was not only going to be great, but fantastic.

And I was right. So for Guardians of the Galaxy Vol. 2 I had no doubts. What I didn't realize was that it would be so inspirational cool art would be made.

I get offers for a lot of stuff to review. Books are usually okay, but I ask people to write first. I won't do a negative review unless something is shockingly bad, but if I suspect it will be shockingly bad I will tell the publicist not to send it. Writing is hard work and plenty of people do negative reviews. Life is too short to read bad books.

And products, almost never. They just take up space. However, when I got an email from the reps for a company named EntertainArt I was intrigued. In the post-"Star Wars" era, where entire movies are made with merchandising plans in mind, most of the product tie-ins will be crap. They won't have any real collectible value, you will store them for 30 years and hope some rich person is feeling nostalgic on Ebay of 2047.

Could they be art? Apparently so. EntertainArt sent me a sample and it was terrific, and so they get free publicity for doing some wonderfully creative stuff that is actually worth hanging on the wall.

How to really tell? Kids. My kids are not impressed by much, but they thought this was really slick. 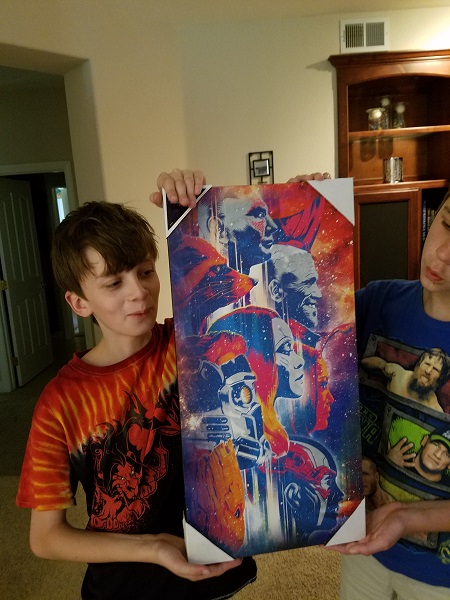 Want to buy it? It's just a cool $25 and it's ready to hang out of the box. You can acquire it here. They have others also, and lots of Marvel and Disney stuff.

Hank Campbell is the President of the American Council on Science and Health.

(1) Spider-Man 2 is in the running, but that was not by Marvel.
Science 2.0
More Articles All Articles
About