Half Face Daddy Shaming But It Gets A Lot Less Attention Than Mommy Shaming: Happy Father's Day
By Hank Campbell | June 12th 2019 07:35 AM | Print | E-mail

Hank Campbell
Women will more often rush to the defense of mothers who give their kids formula, stick to the vaccine schedule, or who let their pre-schoolers play in the yard without a wall to protect them from predators they read about one time on the Internet. Women defend mothers against mommy shaming more often because a whole lot more women are also willing to shame mothers who don't buy food from the right store, clothe them in the right stuff, or act in a way social media zealots tell them not to do.

In my neighborhood, we call any guy who berates other fathers because they don't shop at Whole Foods or do give their kids vaccines 'that guy with no friends.'(1) But among moms the peer pressure is strong.

That doesn't mean dads are without daddy shaming - half are. It just comes from spouses instead. Data found in the C.S. Mott Children's Hospital National Poll on Children's Health at the University of Michigan(2) shows that half of dads are shamed for their parenting style and over 25 percent say that leads to self-doubt while 20 percent say it discourages them from being more involved. Of the fathers shamed, 49 percent went ahead and caved to peer pressure (which could be a good thing, if the behavior allowed was actually harmful) while 40 percent were willing to do some research to see if their behavior was flawed. 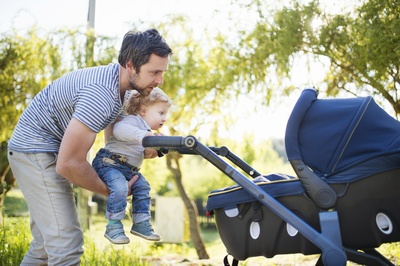 Driving this with you holding him, okay. Driving a car, no. Photo: Storyblocks.

The problem for kids who'd like to live with both parents every other weekend is when the shaming is done by the other parent, in a 'do it my way or you are hurting our children' tone - which happens 44 percent of the time. Men are more likely to brush off Internet criticism (3) but when it's the spouse that's not so easy. Women are more likely to read the latest stuff about parenting and if they are not savvy about the sketchy nature of the self-help and diet tomes on the New York Times bestseller list, it can be easy to assume that because a book was written last year, it must be more accurate than parenting wisdom from a generation or two ago. No. When it comes to parenting, you can relax a little. You were not harmed playing neighborhood pickup games of basketball rather than being in a paid league. If your kids are going to blame you for how they turn out, they will blame you, even if you did a good job.

Obviously if you are doing a terrible job, you know it so stop it. However, social authoritarian parents abdicating common sense to the latest fads will read Mother Jones rather than Science 2.0, so let's assume you are not a bad father, you just think you were not raised in an awful way by being allowed to go outside and that participation trophies and scheduled playdates and quality time are suspect notions. For your enjoyment this Father's Day, here is what you are being shamed about:

67% - too strict.
40% - Not strict enough, at least about the type of food you give the kids. If you are within the radius of a Whole Foods, this may be even higher, given the demographic where they put their stores. Or it could be much lower, since you are the demographic where they put their store so you already believe that "evaporated cane juice" is not just sugar rebranded to sound like health food.
32% - not enough quality time.  All time is quality time. This dopey myth won't go away.
32% - roughhousing. If you are wrestling on the floor, okay, if you are bouncing a basketball off the kid's head because they missed a shot, dial it back, Great Santini.

And then others which were low enough to be what we call statistical wobble. It is hard to know if it's meaningful with poor definition between questioner and respondent and a small sample.

24% - sleep habits. This is pretty subjective but I can create a parameter. If you are giving your toddler Red Bull at night while watching Kill Bill, stop it.
23% - appearance of the kids. See below.
19% - general safety. 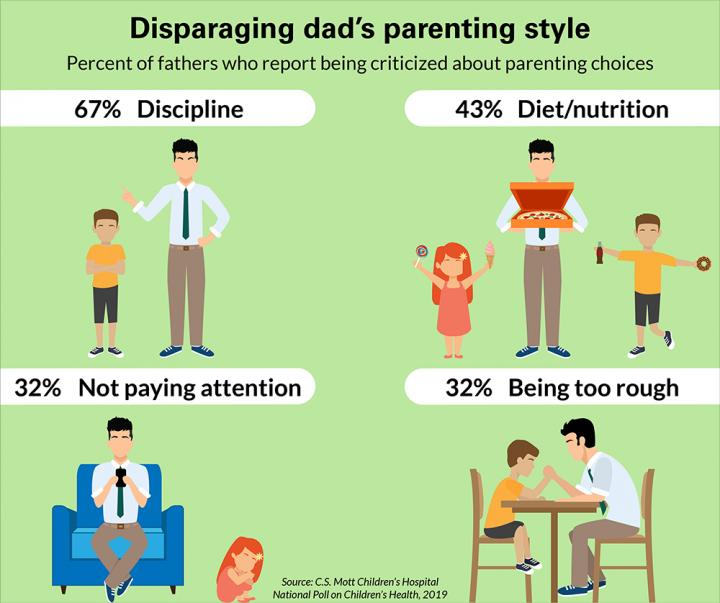 Since it's a poll we don't know what some of those really mean to respondents - quality time is subjective - or how beneficial knowing an average even is. If you are letting the kids play in traffic, stop that, but if you are told they can't go outside without a helmet on, you are being unfairly criticized. In my house I am far more particular about the appearance of the children than my wife is, but I don't berate her for it. We do it my way when they go somewhere with me.

Very little criticism came from other dads, and maybe that is because 90 percent of dads think other dads are doing a good job. In truth, all parents are doing a better job in one regard, the juvenile crime rate has plummeted. Dads can say that's because they are doing better than their fathers.(4) Only a small percentage, 12 percent, reported feeling that a health care provider assumed they were not knowledgeable about their child's health, and only 11 percent felt like teachers stereotype against men and assume they are not knowledgeable about their child's behavior.

That's lower than women but still too low to start yelling about all doctors and teachers. After all, fathers don't want to engage in the kind of generalization they are unfairly criticized about.

(1) And that's even in California, which America regards as the home of wacky social authoritarians. However, I live 'east of the 5', which is codespeak designating that a highway separates the sane people of California from social authoritarians in San Francisco and on the coast. When under 30 percent of kids in Marin County schools were unvaccinated. as was the case (the rest of us had to pass a law mandating that those progressive cranks accept some science) daddy shaming is more common. 'East of the 5' is not that simple these days. We had a Whooping Cough outbreak in my town because Frisco got expensive so a bunch of people from there moved here and brought their vaccine-preventable diseases and their distrust of science with them.
(2) Nationally-representative sample of 713 fathers of children up to 13 years old.
(3) Once a week I get called a Nazi on Twitter, always by the same mentally unbalanced person who has never met me or read a single article I have ever written. When you are otherwise unemployable you hope to get attention for being outrageous, I suppose.
(4) The only place that penalizes kids for behavior more are schools, and that increase is due to government-mandated "zero tolerance" for more and more stuff that was minor two generations ago, when severe punishment was just for actual bad kids, and not creating them by throwing them out of school.
Science 2.0
More Articles All Articles
About