Hank Campbell
When we think of Mt. Everest, it's usually imagery like Sir Edmund Hillary and his guide Tenzing Norgay in parkas and with oxygen tanks making the hazardous 29.000 climb. And then there are the dead bodies, nearly 300 of them, those who perished on the trek to the summit.

What we don't think of is a man running, yet that is what Kilian Jornet Burgada did part of the way in famous photos - and then after 26 hours and 31 minutes, the fastest climb ever(1), he came back down, rested, and did it again, all within a week.

In a new International Journal of Sports Physiology and Performance paper, he talked to Gregoire Millet from the Institute of Sport Sciences at University of Lausanne about preparing to make the trip so quickly, and without bottled oxygen.(2)

How did he achieve his record pace? A combination of extreme acclimation techniques. A few months prior to his climb he spent four weeks living in a tent pressurized to simulate the air at 16,000 feet above sea level. Then for three weeks he trained on a treadmill using a mask simulating 19,000 feet. A week before his attempt he spent 100 hours training in the Alps. 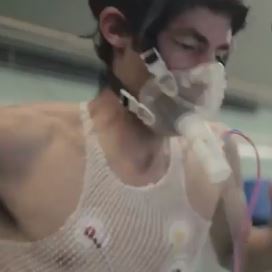 This Living High Training Low and High method followed by hypobaric hypoxia resulted in him being able to go up twice in a week, including an official “fastest known time” of 26 hours and 31 minutes from Rongbuk monastery, which is seated near the base of the north side of Mount Everest at over 16,000 feet (but you can get to that by road.)

Does that mean his method will work for you? Likely not. Just like if you see a bodybuilder and start buying the supplements they use, if you aren't putting in the work he puts in (not to mention some genetic luck) the methods are just a totem. He was willing to commit to 2-3 times a week, 260 hours, in a hypoxia tent, casual runners and climbers won't be able to undergo that.

But we can all be amazed.

(1) Not without some controversy. Officially the record holder seems to still be Christian Stangl with 16 hours and 42 minutes in 2006. Critics also note that GPS records don't show him reaching the summit on his first trip, he is about 250 meters short, and a pair of Indians he says he met on the way down dispute seeing him. His footage from the apex is the kind of thing 1970s UFO believers rely on, but supporters say he was not even carrying oxygen, he was not going to carry a film crew. And he holds the records for fastest trips up Denali, Matterhorn, and Mont Blanc, he is no slouch, but that kind of fame is also not something you risk by fabricating tales.

(2) He was not the first to do that. In 1978, Messner and Habeler endured three days without bottled oxygen on the first such ascent ever recorded.
Science 2.0
More Articles All Articles
About