I Made Smirnoff Vodka Concede Its Non-GMO Label Is Just A Marketing Gimmick
By Hank Campbell | October 20th 2018 08:47 AM | Print | E-mail

Smirnoff, the vodka brand owned by Diageo of Great Britain, recently undertook an ad campaign starring celebrities Ted Danson and Jenna Fischer touting how they are gluten-free and non-GMO.

Wow, healthy vodka. Who knew that was possible?

Well it isn't possible, but since labels on most consumed products are a free-for-all, thanks to the disastrous Dietary Supplement Health and Education Act of 1994 (DSHEA) signed by President Bill Clinton for his constituents, companies can get away with it.

Alcohol has a different jurisdiction, though, so Diageo and its Russian-sounding Smirnoff brand sold in America needs to tread cautiously. I busted them trying to infer a health claim due to using non-GMO corn and as a result were forced to admit they were just creating a marketing scam. 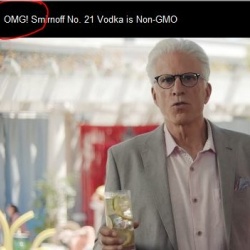 GMO OMG is also the name of a documentary where an activist's kids wear haz-mat suits around farms. If you think Diageo marketing here is a coincidence, bless your naïve heart.

Smirnoff is a billion dollar a year carcinogen - not the Harvard School of Public Health epidemiological food frequency questionnaire kind, an actual carcinogen - and they make it from fermented corn. Since you are smart enough to be reading here, you know that corn does not have gluten, making the "gluten free" part of their label the sort of casual deception that the U.S. Food and Drug Administration allows about food products in the post-DSHEA landscape.(1) But while gluten has become diet fad hype, it is at least a serious concern for actual Celiac patients, so perhaps there is value in knowing Smirnoff No. 21 Vodka is not made from fermented wheat.

In Is Smirnoff Breaking The Law With Its Non-GMO Alcohol Label? I wondered how the Treasury Department's Alcohol and Tobacco Tax and Trade Bureau was going to react to non-GMO being spun as even an implied health claim on vodka.

While FDA is lax about food labeling claims, and USDA will let their National Organic Standards Bureau get away with marketing larceny because it still involves farmers, Treasury has plainly stated, "Given the inquiries we have received and interest at the state level, we are reviewing our policy on the use of bioengineered food labeling statements or references on labels under our jurisdiction" but until that is done, and it's been four years, and only should the decide to follow USDA and FDA and be lax about aggressive "organic" claims, it is illegal to make it appear as if non-GMO is a health claim.

They are only allowed to make the kinds of organic claims food companies make if it's about "the environmental impact of the process and packaging rather than the product itself."

So they could advertise that their corn product is fermented in a warehouse powered by solar energy, provided that is true, but not that it makes vodka healthier.

After my criticism, they walked back their healthier vodka deception, though it's always the case that retractions and clarifications get far less attention than deception. Their representative walked back the suggestion in their video and stated in an email to me, "Smirnoff is not claiming that GMO ingredients are a health concern, nor is it claiming that vodka, or Smirnoff No. 21, is healthy."

It's certainly good that they are not claiming that their vodka, a legitimate Class 1 IARC carcinogen (when IARC was a science body and not made up of activists playing footsies with statistics in order to get jobs as expert witnesses in lawsuits against companies), is healthy.

But it isn't just the GMOs in other corn vodka that the public should be concerned about, if Smirnoff marketing groups are in charge of hype. In their press release is a recipe for Elote, which if you are actually from America and not Britain know is basically delicious Mexican street corn.

Not when they are done with it.

But here it is. They even write it should be made "with all non-GMO ingredients!" despite later admitting there is no reason at all to claim that, so to help their health-conscious consumers know what they are really drinking, here are the toxic chemicals are in their Elote recipe:

GMOs would literally be the safest thing in that dish, if their marketing department had the same levels of knowledge about science as they do how to scaremonger gullible people for a fat bonus.

(1) Whereas if you want to change the color of some text on a drug label you have to go through 18 months of approval and have a phalanx of employees doing paperwork.

(2) In their press release they gush, "Smirnoff delivered a non-GMO "OMG" moment for consumers everywhere" and since "GMO OMG" is the name of a scaremongering film about, you guessed it, GMOs, they certainly are dog whistling to a demographic that hates science.

What they don't realize is that it is the pro-science community who keeps their product from being in court settling lawsuits all of the time. If 'any dose of any chemical is a poison' tactics were used against the alcohol industry, the settlement would be a trillion dollars.