If We Want The Next Generation To Care About Nature Let Kids Enjoy It Unsupervised
By Hank Campbell | August 12th 2020 08:50 AM | Print | E-mail

Hank Campbell
Few care about nature as much as hunters, fishers, and other outdoor sporting enthusiasts. Yet, that is the opposite of the narrative created by more militant environmental groups, who promote the belief that land must be untouched by people and legally off-limits, even if it means government social authoritarianism.

Yet in their desire to raise their $2 billion a year by keeping everyone on apocalyptic red alert, they miss something obvious; if no one is allowed to experience nature, they won't appreciate it or care about it in the future. And if they don't care because it's not valuable to them, they won't support environmental lawyers.

A new paper finds what used to be common sense - that kids should be allowed to explore or hunt or fish alone. No helicopter parenting, let them wander.  It's good for them physically and mentally. Instead, with the coronavirus pandemic people are more paranoid about nature than ever. That may because we are becoming more removed from science due to the work of activist groups that insist we're killing the planet just by eating. 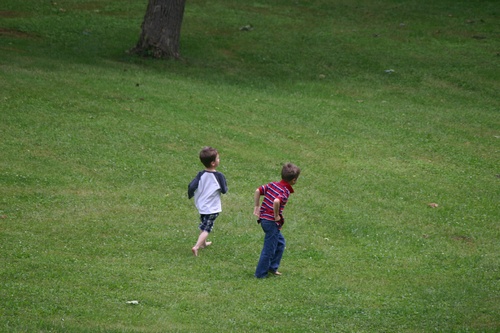 My kids chasing a deer in 2009 at their grandparents. We had sent them outside to play by telling them to watch for deer that would try and get into the vegetable garden. Never in my entire history had I actually seen a deer get into our vegetable garden. They've done it, but I've never seen it. 30 minutes later I went to the window to see what they were doing and the kids were playing with a manual pump handle, oblivious, while deer were in the vegetable garden. So I grabbed my camera and told them deer were down in the garden and took this picture of my kids thinking they could catch them. Photo: Hank Campbell

That constant alarm about a world that is absolutely safer than at any point in history denies young people a chance to develop their appreciation for nature in many ways.

The case for letting kids do things without your drone overhead

The survey results were from 1,285 North Carolina children ages 9 to 12 asked about their exposure to or experience in fishing, hunting, camping, and sports. Analysis of the answers found that kids who participated in solitary activities built stronger connections to nature. Sports and camping are great for social connections but solitary moments in nature, like hunting and fishing, build a different kind of connection.

It may sound bizarre in 2020 because I'm not from the 19th century, I am not even a senior citizen, yet I had a rifle in my hands out in the woods at age 12. By age 16 I even left for days at a time. We hunted for meat. The land around us, like our small farm, was a resource but it also had to be carefully nurtured. It gave me a tremendous appreciation for the natural world. Imagine my disappointment when I later worked for an environmental group and without knowing my background they believed people like me were the enemy. None of them had grown up being comfortable in nature, they only visited it like a museum. Their experience was buying a lot of gear in a store and going on trails once a month. They thought being for earth meant being against science and the modern world.

You know what have a very difficult time raising money now? Museums. And not just because of coronavirus but because people are afraid to appreciate history - someone was hurt or exploited somewhere by someone in the history of every civilization ever. Who wants to be told to feel awful just for existing after paying $20 to get in?

We don't want that to become a problem for nature but it will be if people stop caring because it's too remote. Then government will take over. When government is in charge of all conservation, it becomes like everything else remote centralized bureaucracies stuffed with people who love remote centralized bureaucracies create; expensive, inefficient, and over-regulated. The last thing nature needs is the equivalent of a CDC that needs 6 weeks to tell us lettuce eaten 5 weeks ago had E. coli on it.

If you are from a family that did not hunt and took up hunting, or are an environmental activist who hunts, I'd like to talk to you.

Hunting is in decline, as is farming, and nature and agriculture are two areas where lack of common exposure has led to other bizarre beliefs in defiance of both common sense and science. Do you think a weedkiller can cause cancer? You never worked on a farm or you'd know plants are not people. Do you think hunters use AR-15 "assault" rifles to hunt big game? You must not know any hunters. They are illegal to hunt with; because they are not powerful enough so it's inhumane to use them. No assault team uses a fancy .22 rifle on a mission.

I am not advocating for hunting, I am advocating for letting kids go outside unsupervised. As a responsible parent. you will have to micromanage a little. Micromanage yourself, that is. Parents with 24-hour news on their phones have become so paranoid about the world - safer than at any point in history - it is a struggle for parents to let kids leave the house without a cell phone. But at least let them go to a park without one. Let them discover that the seemingly random nature of dogs - *squirrel!* - is not random at all.

But that is a science article for another time.

(1) Rural people can be just as shocked about urban lifestyles. Someone from a small town will be surprised to see 12-year-old children taking New York City subways unsupervised when in media accounts it seems like everyone is mugged or stabbed every day, but it's just a different jungle.
Science 2.0
More Articles All Articles
About