Hank Campbell
A joke in nutrition circles is that while you once needed to be rich to be fat, now you need to be rich to be thin. Scientific progress has given us cheap food, anyone can afford to eat well, and after an existence of worrying about food availability it takes generations for culture to change to not eating as much as we can. Rich people, though, have gym memberships.

Some in the culture wars think the type of food is the problem rather than energy balance - calories consumed rather than the types of food. They have lobbied for busing people on food stamps to farmer's markets or mandating a portion of money only be spent on vegetables. They don't understand how cellular respiration - our mitochondria that turn food into a common energy currency - work. If we are going to subsidize something, it should instead be gym memberships. Placing special food stores into what the more social authoritarian segment of the food community calls 'food deserts' - deemed such because some areas lack the types of food that food policy wonks think people should want to eat - is as big a waste of money and time as federal nutrition guidelines.

The free market is not wrong. Despite what a few Harvard or NYU humanities academics try to claim, there is no Big Convenience Store conspiracy blocking out organic food supermarkets, neighborhood delis or bodegas or whatever they are called in various regions exist because they carry what people want. The "academic" health contingent and their allies try to claim otherwise, but they also created a set of federal nutrition guidelines that only 2 percent of people can follow. They are more aspirational - fabricating a Victoria's Secret model of dietary behavior - than valuable.

Many areas contain a Popeye's rather than a Whole Foods because Popeye's is tasty food at an affordable price, while Whole Foods is a smug demographic that lies to the public and claims any vegetables that didn't pay for an organic sticker are less healthy. Cost is the important factor for local convenience stores versus supermarkets also. If they are going to stay in business they need to carry what people actually want, not what elites are told they should want.

It's the worst kind of correlation. Is someone fat? Is a convenience store nearby? Then suggest the store caused the obesity. It's as ridiculous as blaming a nearby dry cleaning store or Maybelline makeup.

It turns out that the pro-choice argument - education - is right. Placing fancy stores into these "food deserts" doesn't make people want to buy what food fundamentalists are selling. They will still go to convenience stores. and those don't sell a lot of organic fruit.

The data were a nationally representative purchases of 61,000 households plus national UPC-level sales from 35,000 stores covering about 40% of all U.S. grocery purchases which was then matched to locations of all 6,721 new supermarkets that opened in the United States from 2004 to 2016. That's a solid cross-section and using that data, simulations showed that giving low-income neighborhoods the same products that high-income households buy will only change buying habits by about 10 percent. 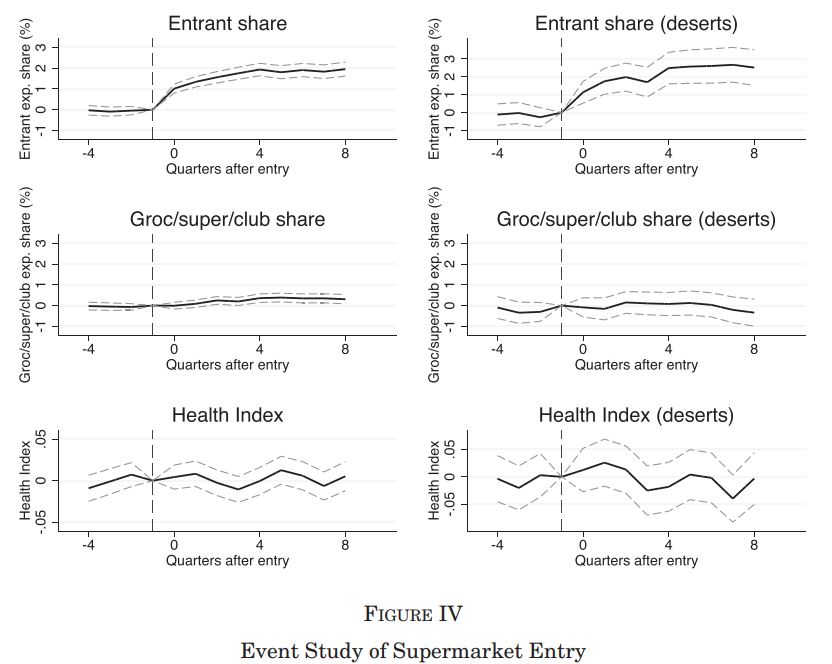 Since demand is the great driver, mandating and subsidizing alternatives would be a waste of money and yet groups who you know politically oppose "supply-side economics" - or they wouldn't want government mandates for types of supermarkets in neighborhoods - absolutely insist that if government would simply pay for better stores and drive out bodegas, everyone would be healthier.

That's Field Of Dreams wishful thinking about food and behavior, not science. It was just a movie, if you subsidize a Whole Foods store your grandfather will not appear from an organic corn field and play catch with you. However, a subsidy for vegetables would likely work, even if that is more of the nanny government poor people don't need. And a subsidized gym membership would help, except as we saw when government made student loans unlimited and took over health care, costs would likely go through the roof and the quality will not improve at all. Poor people would have access to a low quality fitness center that costs $200 a month.

There is an obvious disparity between the food choices made by the rich and poor but it is better than in the past, when the poor had no choice about food at all. The only real way to fix that is time, and shaking off our evolutionary past.
Science 2.0
More Articles All Articles
About