Lots Claim On Surveys That They'll Help Fight Climate Change - But Surveys Are Not Behavior
By Hank Campbell | September 14th 2021 11:28 AM | Print | E-mail

Hank Campbell
Before COVID-19, it was a large number of Democrats and a tiny number of Republicans who distrusted vaccines, believing something like that they caused autism, or that FDA was in cahoots with Big Pharma, or some weird supplement was just as good as medicine.(1)

While on surveys they all claimed to believe in natural medicine and that communicable diseases were no big deal(2), when the pandemic hit, not only did they buy up all of the Clorox and Purell, celebrities and other wealthy coastal elites who denied vaccines for their kids were paying their way to the front of the line to get this one - and ironically demanding it for their children.

What you claim around your friends, or when some company is asking you questions, is often different than how you would behave in the real world. Any question more important than 'do you like cilantro?' is so full of confounders that it can be vaguely informative but not actionable. Surveys, like epidemiology and mouse studies, meet the definition of "exploratory" and should not be used for any decisions, even as they can be used in the mix.

California, for example, is constantly hammering Republicans for not caring enough about global warming. Yet the moment they realized that solar and wind actually don't do what they hoped they would do, they asked the federal government to let them violate the Clean Air Act and every other piece of legislation without regard to emissions so they could run their fossil fuel plants at full blast.(3)

Who on surveys would have admitted that if wind and solar didn't work well they'd go ahead and belch more emissions into the atmosphere than legally allowed? In America's self-proclaimed most progressive state. No one. Instead, like everywhere in the developed world, they said on surveys they would make any changes needed, and I believe they believed it. Right up until the moment there were brownouts.

Case in point; Pew recently surveyed people in 17 wealthy countries about climate change. Most results are just what you'd expect; 37% claim to be "very concerned" while 34% claim they would consider making “a lot of changes” to combat it. Young people always feel the need to 'live in important times' so they claim to care more on surveys than everyone else.

Nearly twice as many on the left as the right would consider making changes.

So Republicans hate science, right? No. In actual behavior, Republicans conserve electricity just like Democrats. They recycle. They do all the things people who care about the environment do - they just don't lie on surveys about how they care about climate change and it is just that everyone else is failing. People who really care about the environment do not buy organic food and Teslas and let poor people in apartments subsidize the solar panels on rich homes.

In one strange turn, the survey asked other countries if they thought others were doing enough. America did not look great. Europeans led the way in saying how America has disappointed them. Europeans are always disappointed in America. Here is another example. 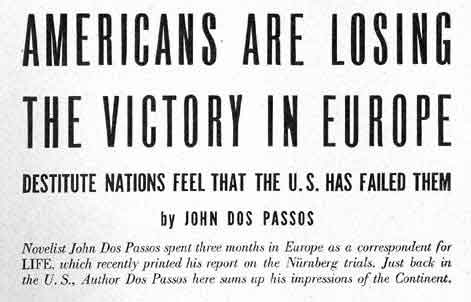 That was January 7, 1946, a few months after winning World War II, freeing Europe from the German scourge of Nazi-ism, and rebuilding their countries.

But they're right we have done a poor job. Because we let feel-good environmental fallacies overrule common sense. We blocked developing countries from getting World Bank loans for any centralized energy that was not solar or wind, relegating them to wood and dung for cooking fuel - that's a gigantic emissions negative, not to mention vaguely racist. And then the Obama administration let China bully him, with the communist dictatorship declaring it would consider no emissions targets until 2030, leaving speechwriters to scramble and claim China had never mentioned a date before, so that was actually a victory.

EU respondents gushed about their own efforts while dumping on the US and China, as anyone who has followed geopolitics for a day might predict.

It's always funny when France preaches to any other country on a science issue, because they are the most ban-happy, goofy, anti-science place on the planet.  And they are hypocrites. When the first climate agreement was created, in Kyoto in the 1990s, France and Germany conveniently picked a target date for emissions that was before France had just turned up another nuclear plant and when West Germany had just reunified with the former USSR colony of East Germany. France skated to their target by default and all Germany had to do was shutter Soviet factories from World War II they were going to close anyway and their target was easy to meet. 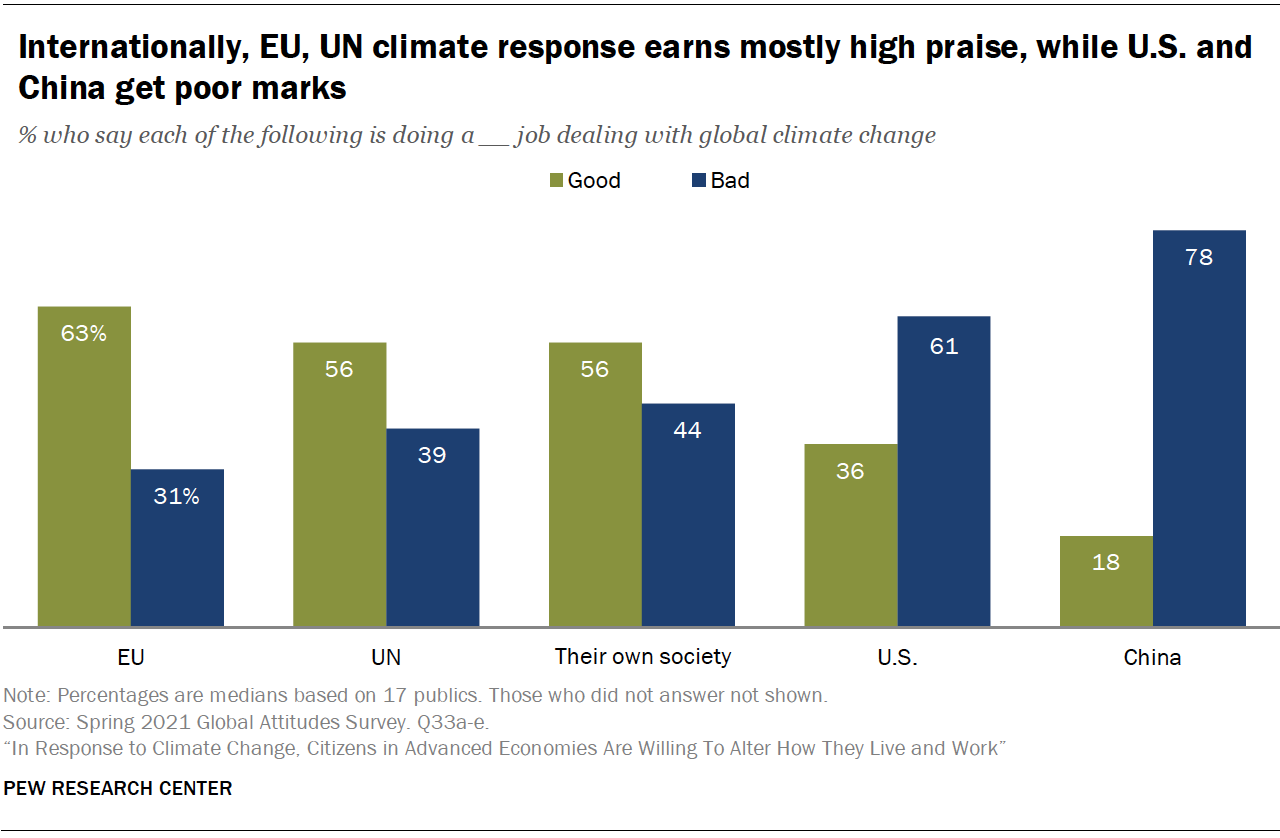 The EU gushes all over themselves and claims the US and China need to do more. The US is a leader in the developed world in emissions per kilowatt, thanks to natural gas, while China leads the world in solar and wind installations. What does the EU lead in? Buying energy from Russian fossil fuel companies.

No one expects EU survey takers to know any of their own sordid history when it comes to climate change, nor do we expect them to know that in their last agreement they agreed to start burning wood pellets to offset the failures of solar and wind - but that they allow themselves to 'charge' the emissions to the country that sells them the wood, not their own countries for burning it.

That's the problem with surveys. Europeans can 'feel' any way they want when filling them out, but in behavior they are as mercenary as any oil executive out there. In the real world, they have not cut their energy usage, they have just exported their emissions to Russia and the developing world.

(1) It still exists today. Sweetgreen CEO Jonathan Neman claimed eating more of his organic salads was the best way to fight the pandemic, because people with severe illnesses had co-morbidities like obesity, and his expensive salads slathered in dressing apparently have no calories. INC magazine immediately rushed to his defense, like 'he started a conversation' rationalization that no one actually believes, or every racist homophobe would use it too.

(2) Some felt it was a big deal. California Governor Gavin Newsom claimed that the pandemic started in a hair salon. Businesses which are overwhelmingly Asian n California. That sort of casual racism by elites - 'I don't dislike Asians, I love the lady who does my nails' - is why some Asians are just fine checking Yes on that recall election box, even knowing it would fail.

(3) Germans can also pretend they have switched to green energy, but they have made the electricity spot market wildly profitable - where they buy in emergencies to cover when solar and wind do not work - and therefore Russians wildly rich.
Science 2.0
More Articles All Articles
About