Hank Campbell
It may not feel like science wins often in court but it beat out activists last week.

Not only did science, and Science 2.0, win, it was a unanimous decision at the highest court in the land, the Supreme Court of the United States.  And the ruling dealt a serious blow to "sue and settle" agreements with trial lawyer groups, in this case Center for Biological Diversity, along with limiting the power of the federal government to bully and intimidate landowners.

The case was the Dusky Gopher Frog, and it had all the trappings of a conspiracy. Julia Roberts and Christian Bale would be starring in a movie about it right now had this been corporate tricks rather than the U.S. Fish and Wildlife Service. It involved gentlemen's agreements on how to settle a lawsuit so the Obama administration, under the oft-abused Chevron Deference decision of 1984, could legislate without that annoying Republican Congress getting in the way. It involved a secret consultant for the government, accountable to no one except its sole client, issuing a bizarre economic justification for moving the frog to another state, where it cannot survive and has not even been seen in my lifetime. It involved government threats against the landowners who were having their land seized. It even involved changing the species name so it would no longer be the Mississippi Gopher Frog - of Mississippi - but could instead be named the Dusky Gopher Frog and uprooted and moved to places in Louisiana where, government contended, the landowners would have to spend up to $34 million to tear down their forest and put up...another forest. And each frog had to have 60 acres of specially built new forest, all at the expense of the owners. This is a three-inch frog we are talking about. 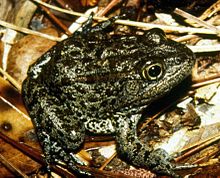 It was a shocking abuse of power. It made the ridiculously broad Waters of the United States effort look minor by comparison.

Weyerhaeuser Company v. United States Fish and Wildlife Service, et. al. (827 F.3d 452; 848 F.3d 635) was a travesty of science and of justice. On the travesty of science there was little surprise. Center for Biological Diversity are trial lawyers who have never accepted any science that doesn't come with a check attached. Also no surprise was that Industrial Economics, Inc. - a name so vague and ridiculous it sounds like a CIA front - which somehow has 100 employees even though it does nothing but economic rationalizations for the federal government agreed with its client that Louisiana would be the perfect place for a Mississippi frog, over the place where it has actually lives for about a million years.

The travesty of justice thankfully did not occur. The Supreme Court could have done nothing - and that would have made U.S. Fish and Wildlife the most powerful agency in America, literally a fourth branch of government. So after hearing about the issue I wrote out the details in articles, like I do, to codify my thoughts, and get help in logic from a very smart audience. Then I wrote an amicus brief and submitted it.

After that, it was just waiting to see. I don't know the lawyers involved, I have never corresponded with them, or even gotten a forwarded email, I certainly got no money. Other than publicizing something that 18 months ago was getting no attention, I had to hope the combination of science plus property rights would be able to get a majority in what could easily have been a tied court (Justice Kavanaugh had not been present during the debate.)

Center for Biological Diversity is pretending this is still a win for them, rationalizing that it is a "narrow" ruling that will be sent back to the U.S. Court of Appeals for the Fifth Circuit, where they succeeded before. It is not a narrow ruling to determine that a "habitat" must be a place where the frog could actually survive. If that is not the metric for habitat Center for Biological Diversity could sue to have the frog places on the moon and then prearrange a settlement for a billion dollars.

Where it can survive is where it lives. In Mississippi, where the other 5 tracts of land that government's "consultant" disregarded, already owned by the government, are.

Science can win in the court of public opinion - after I started writing about this, here and at the American Council on Science and Health - it became a movement, so much so that George Will termed it a "much-publicized dispute" in his Washington Post article. It sure wasn't back then.

And science can win in the actual court. After a San Francisco jury gave a ridiculous punitive judgment to a lawnkeeper who claimed a weedkiller must have given him cancer, our amicus brief there helped convince a reviewing judge to toss it out - which would force a retrial or force the lawyers to admit it was just about money. And they chose to do the latter.

And now a win for sane government activism over the Center for Biological Diversity kind. 2018 has been a very good year for critical thinking.
Science 2.0
More Articles All Articles
About