Hank Campbell
A few species of mosquitoes are nothing but carriers of disease, so pesticides were used to wipe them out in much of North America. Worldwide they remain a public health problem and while some ecologists claim a mythical (and scientifically debunked) 'balance of nature' and therefore insist Aedes aegypti might have some benefit, if we turned them extinct we'd have nothing but less  yellow fever, dengue fever, and Zika worldwide, the way we do in the U.S.

The lack of deaths due to mosquitoes thanks to science decades ago has given us a modern idyllic view of pest control. Alternatives to science and medicine can be values-based luxuries because we are safe from the worst mosquito diseases. So it's no surprise that in 2019 only a third of parents used the mosquito repellent that works, N,N-Diethyl-meta-Toluamide (DEET), and the rest opted for things that sounded natural but were most likely a placebo, such as citronella candles.

The nationally-representative Mott Poll findings used responses from 1,120 parents with one or more kids in the 5-12 age range and found that when it came to mosquitoes, 30 percent of parents chose "natural" or homemade products despite their lack of efficacy. And while DEET is safe for infants the most popular natural alternative, oil of lemon eucalyptus, should never be used for infants or toddlers under age three.

So much for belief that natural is safer than science. 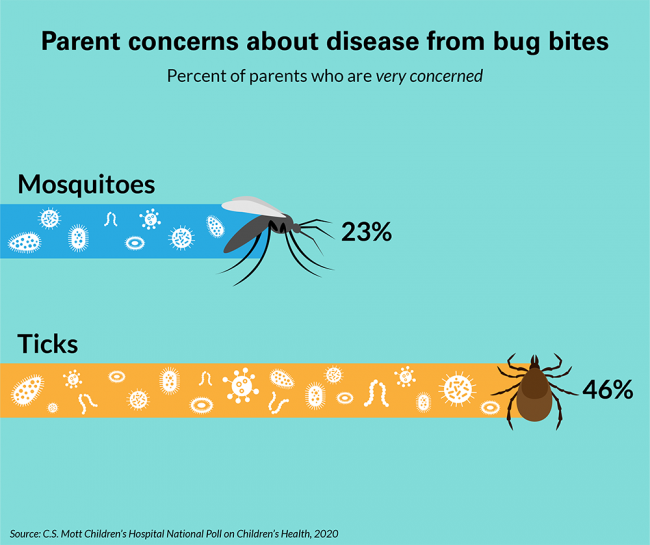 Just like people casually dismissed the flu vaccine before coronavirus reminded us what the world looked like before modern medicine, parents have felt fine using feel-good fallacies against mosquitoes even as Eastern Equine Encephalitis made a comeback in the U.S. last year.

When it came to ticks, though, parents were not only more concerned about something far less likely to be a problem, that concern caused them to opt for more chemicals that work over some recipe they saw on a Facebook page run by a neighborhood Karen. It may be because Lyme disease gets attention this time of year, and there are always persistent claims that someone has been the first to get what they call Chronic Lyme disease. There is no evidence such a disease exists, but deer ticks can transmit the Lyme disease that does exist in about 2 percent of cases, while wood ticks can transmit Rocky Mountain spotted fever, so prevention is best.

DEET protects against mosquitoes, but ticks won't always be stopped, so picaridin is a better option and parents used that if they were going in the woods. Like DEET, picardin is a safe option for kids ages two months and up. For maximum protection, there is permethrin sprayed on clothes.

When bites did happen, the pro-science landscape looks a little better.

Parents who used eucalyptus instead of a product that works and had their child get a bite opted for an antihistamine in almost 50 percent of cases, while 40 percent used calamine lotion and 27 percent used rubbing alcohol. Some parents who didn't learn their lesson about citronella oil instead used home remedies like oatmeal baths but kids never forget, so don't do that to them.

DEET, picardin, and permethrin have been safely used for decades and and the first two are even scientifically proven safe for infants but western activism has created the chemophobia culture that was evident in the 2019 poll result. Will that hold up when the survey is done this time? During the COVID-19 pandemic expensive green alternatives were readily available on shelves while products shown to work, like Lysol, Clorox, and Purell, remained back-ordered for weeks. All it took for faith in alternatives to fade was an actual problem, much like the mosquito problem that residents in developing countries face.

It may be that this summer the citronella oil market will face a sharp drop-off, since it does nothing, but companies are still paying to have Non-GMO Project stickers on 67,000 products, so it may still be that nothing will change at all.
Science 2.0
More Articles All Articles
About