Nitrogen Dioxide In Air Statistically Linked To Asthma - But The Methods Are Unclean
By Hank Campbell | August 6th 2019 07:07 AM | Print | E-mail

In developed countries, air quality is now great. So great that true smog (PM10 - particulate matter 10 microns in diameter) is basically going extinct in countries like America so epidemiologists and demographers have taken to promoting concern about particles so small they can only be detected with an electron microscope (such as PM2.5).

While claims of increased mortality due to PM2.5 have fallen flat, asthma still exists and it is well-known that asthmatics have shorter lifespans.(1) A new paper speculates that as many as 170 cases of asthma per 100,000 kids each year could be caused by traffic pollution, and specifically Nitrogen dioxide (NO2), which is really common at trace levels everywhere.

This graphic from the paper shows this is demography that reads more like a plaintiff attorney plea for action than science. While it is color-coded to be as scary as possible, the critical thinking community knows color gradients are designed for dramatic effect, so instead of causing worry it will be dismissed by policymakers and experts. Using these suggestive graphics, there should be a lot more kids with breathing issues than there are.

During the data period selected for their paper (which does not make a lot of sense, they use NO2 levels from 2010-2012 but asthma rates from 2015) 97 percent of children lived in areas with annual average NO2 concentrations lower than the WHO guideline of 21 ppb. Yes, 97 percent, and so 92 percent of cases were in areas with safe levels of NO2. The science community would conclude that trace NO2 levels and formation of asthma are not linked but they defy that and suggest that NO2 guidelines are simply not low enough. An objective look at this finds NO2 at the WHO level is not a problem or else with 97 percent of kids covered, there would be a lot more than 170 cases of asthma per 100,000 kids each year.

The deep red above is half the WHO recommended-level of NO2 but if you don't know better it looks really scary. Who does that? Why?

Asthma persists worldwide even though Europe, deep red above for example, looks like this when it comes to actual air pollution. PM10. 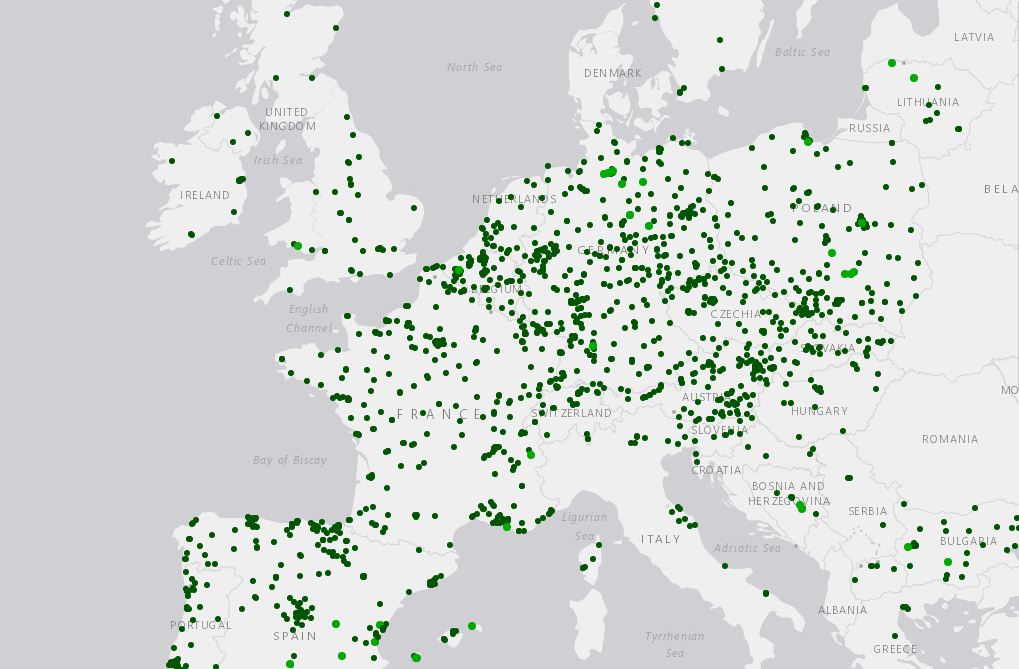 Real air pollution barely registers. Obviously PM10 does kill people, which means it will harm asthmatics before deaths occur, and in combination that has been a great reason to reduce smog levels, but once that happened smog began to be redefined. Since PM10 is obviously 4 times the size of PM2.5, using PM2.5 in maps can make pollution look worse, even though you can't see it, you can't feel it, you need an electron microscope to even detect it. Some have even taken to promoting scary narratives about PM1, because the whole world is red air pollution then.

READ ALSO: Is A Hamburger Really Worse For Pollution Than A Diesel Truck?
But air quality isn't really worse, and it takes demographical wizardry to make it seem that way, in this case an epidemiological meta-analysis of other papers coupled with data from other papers on air quality and then using statistical methods from other papers to estimate premature mortality.  That is why data is cobbled together from one set of years and asthma from another. It was low hanging fruit, a heavy peach, but why not use 2012 asthma to match the NO2 data?  Had no one already done it for them?

The problem with this kind of manipulation is that it requires belief, the opposite of science. Air pollution certainly exacerbates asthma but does ambient air quality create asthma? While conceding they don't know the answer, the authors state they use NO2 as a proxy anyway because...other people have. What would be a safe level of NO2 where these extra cases of asthma disappear? They don't know that either, WHO already feels like they created a safe level, but if there is a super-duper safe level there is no way to know, because it is all just correlation. They can't even know if NO2 is causing any asthma at all, there is no biological hypothesis for how trace levels of car emissions can cause asthma any more than the smell of bacon would.

It's scaremongering, not public health awareness, because 92 percent of asthma cases occur in areas where the air quality is great, leading the authors to declare the hazardous air quality level must still not be low enough, while being forced to concede they don't know if the compound they decided to use as a proxy matters at all.

(1) As evidence they note that asthma diagnoses have gone up since the 1950s, the last decade when smog was left unchecked, a a period where thousands of people died in London in just a few days due to smog plus an atmospheric event that kept the pollution stagnant. But autism has also gone up, as have the prevalence of vaccines, as have ADHD diagnoses, as have lots of diagnoses. America is the most over-diagnosed country in the world, we even invented bizarre things like pre-diabetes and a vaping epidemic, and the definition of asthma has also been broadened substantially. Whether or not scaring kids and parents about exercise because asthma is now on 'a spectrum' while a third of the country is obese is a matter of debate.
Science 2.0
More Articles All Articles
About