Pain Patients Are Not The Problem, Shows CDC, Opiod Deaths Are Due To Recreational Fentanyl Plus Benzos, Cocaine, And Meth
By Hank Campbell | August 29th 2019 11:41 AM | Print | E-mail

Hank Campbell
Though Johnson  &  Johnson and Purdue Pharma are on the hook for big judgments due to their marketing practices related to opioids, claims that they "created" an opioid epidemic are the scientific equivalent of fat shaming people if you don't like Burger King commercials.

Attorneys will claim it, they will get thousands of people to sign up as litigants, and juries will agree with the emotional arguments they hear, but that has nothing to do with science or health. In appeals cases, science data is used, which is why so many spectacularly ridiculous judgments (like baby powder or a weedkiller magically causing cancer) get overturned.

Data show that prescription opioids given by legitimate doctors for legitimate pain patients are not the real problem, it is illegal fentanyl, often mixed with other drugs, like benzodiazepines, cocaine, and methamphetamine, that are killing people. And often these are recreational users and sometimes even murderers. Not Big Pharma marketing departments.

Three days ago, the New York Post told us about an arrest in the death of a chef at a restaurant across the street from my office when I ran a New York City nonprofit. They told us that the psychopathic prostitute had given him "drugs laced with fentanyl." Fentanyl is the drug. Want to make toxic ice cream? Mix in fentanyl. Deadly Activia yogurt? Mix in fentanyl. This was not an opioid gotten via prescription, it probably contained drain cleaner. 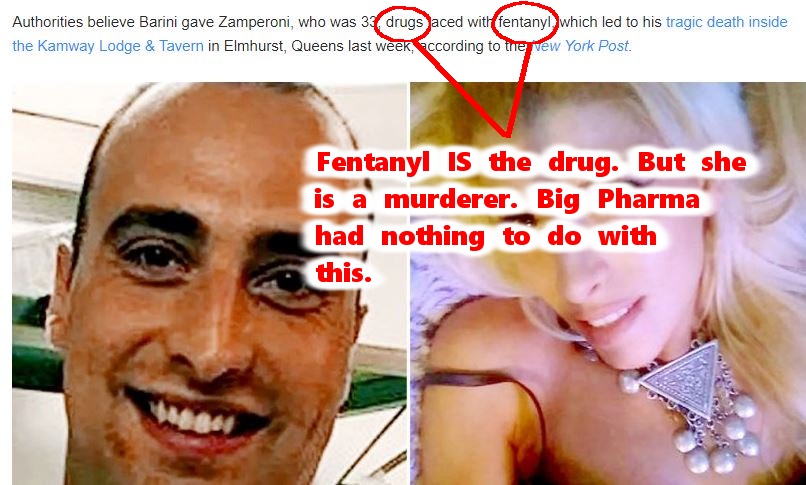 Zamperoni was not visiting a prostitute for pain treatment, this was recreational, but we are stigmatizing pain patients (and everyone who loves to dump on pharmaceutical companies) by lumping them all together and that is doing the medical community a disservice.

Instead of being due to prescription pain killers, the CDC shows rise in deaths was due to illegal  fentanyl and fentanyl analogs mixed with heroin;  62.6 percent of the deaths involved methamphetamine, benzodiazepines, or cocaine - non-opioid drugs.

Though we hear cosmic claims about the opioid epidemic, only 4,000 involved legal pain medication. And since some pain can be excruciating it is unclear how many of those might be suicides. In physician suicides, benzodiazepines are a common product, and older people who use them for anxiety use them even more as they get older - 31 percent have long-term prescriptions. "Take a Valium" is even a joke when people want someone to calm down. Yet no one is worrying about benzos for anxiety despite their role in drug deaths the way they are prescriptions for pain patients needing pain relief.

Cultural critics argue that when it was minorities dying due to drug use, it was dismissed as risky behavior, and only when white kids made the newspaper that lawyers started lining up to sue. They may have a point, which means pain patients are being exploited once again.
Science 2.0
More Articles All Articles
About