Hank Campbell
Ben&Jerry's is not going to roll out ice cream derived from geneticaly modified cells in a lab any time soon - their buying demographic hates science (although their parent conglomerate Unilever loves it) - but the public wants it now.

Perfect Day Foods, named as such because legend goes that when cows listened to the Lou Reed song they expressed more milk (people are willing to believe, the British Columbia Dairy Association even had a “Music Makes More Milk” contest in 2012) but one thing separates myth from reality; revenue. Perfect Day test-marketed an ice cream product at $20 a pint(!) and all 1,000 sold out immediately.

Plant juice alternatives to milk and GMO plant alternatives to meat are big hits among consumers but face challenges because they insist on being able to use terms for the real thing in their marketing. And the dairy and meat industries are asking for the same label honesty that Velveeta is forced to obey in not being able to call itself cheese. 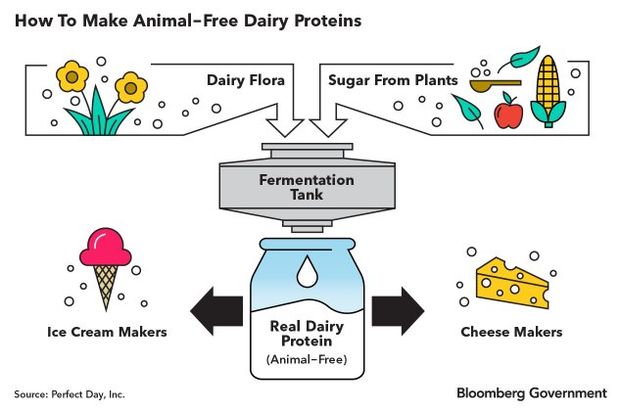 Perfect Day is made by putting genetically modified cow’s milk DNA (smartly called dairy flora, because it sounds more natural) in a fermentation tank to create whey and casein. That forms the basis for their dairy substitute.

But they are trying to be a little too clever in saying their protein does not contain GMOs because they filter out the genetically modified flora. Organic food shoppers are a demographic that hates science, they think if an animal has GMO feed it produces different meat. They are not going to believe that a genetic engineering process does not result in a genetic engineered product when they deny basic animal biology.

But there are a lot more regular shoppers than there are organic activists, and vegans are willing to cast off organic industry militarism when it comes to their issue. I love the science concept. Though activists are wildly exaggerating the impact of agriculture when it comes to the environment, there is no question this can find a place for people who want to put their bellies where their climate change proclivities are. Heck, Leonardo DiCaprio can serve it on his private jet when he is flying off to climate awareness events.

This is also a case where a dairy company may have room to wiggle where they won't when it comes to cheese.

Ice cream is already a processed product, it does not come from an animal nor can it be created without additives the way butter can. Originally, ice cream was made using rock salt and ice and if Big Ice Cream tries to contend this is not the real thing, a quick look into every single factory will reveal that no one does it 'the real way' any more.
Science 2.0
More Articles All Articles
About