Hank Campbell
There is some produce advice coming from the activist camp yet again, but what they are selling is rotten.

A recent paper senior authored by famed organic industry proponent Dr. Michael N. Antoniou raised an alarm about insecticide and herbicide residues found in the fecal microbiome of 65 twins in the United Kingdom. The big problem with it is that it preys on modern science journalists not knowing that dose matters. Any detection of any chemical that can kill a rat at high doses is correlated to pathology in humans, despite that being nothing close to reality.

Every credible toxicologist, and anyone who has taken a high school chemistry class knows "the dose makes the poison." Caffeine in coffee is far more toxic - a lower lethal dose per body weight - than every modern pesticide on the market, but we don't ban coffee. We don't even ban organic certified copper sulfate, which is more toxic than products like atrazine or glyphosate, because the safe level is well established. 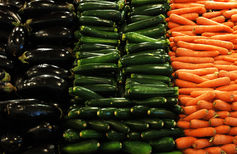 These will kill you. Unless you paid 100 percent more at Whole Foods.

Yet Dr. Antoniou and colleagues don't get into any of that, if the past is any indication their goal is to sell organic food and get an 'expert witness' contract in a lawsuit against competitors.

The price of staying healthy, they insist, is to pay more — up to double the price in some cases — to buy organic. These recommendations are not from an objective source, as Cornell University microbiologist Kathleen Hefferon recently revealed. It turns out a small circle of researchers, including Antoniou, aren’t that great at actual science. Her investigation caught a group of biologists violating basic ethical standards in an apparent attempt to promote the buy organic message. Hefferon examined a study published in the journal Environmental Health that claimed “high” levels of herbicide residues were detected in three out of five Americans. The researchers involved in the study iinsisted they were free from conflicts of interest, impossible given the involvement of economist Charles Benbrook as one of the study’s principal authors. Benbrook is a famous organic industry proponent and professional "pesticide litigation consultant" for law firms mounting unprecedented, billion-dollar attacks on pesticide companies.(1)

Hefferon explained that, not only did other key authors share ties to the trial bar and organic industry, but also that the peer reviewers themselves — Susan Kegley and the same Michael Antoniou — had collaborated at least eight times with one or more of the authors of the pesticide residue paper.

Peer reviewing friends? It is more common than you think. In  the Wall Street Journal, I revealed that a paper claiming an herbicide was turning frogs 'gay', as Berkelely Professor Tyrone Hayes termed it, in PNAS was never peer-reviewed. It was instead hand-walked past peer review by an Academy member using a process the magazine only ended after my exposé. Hayes had dinner at the peer-reviewer's house every week, his wife was the head of the group Hayes was in at Berkeley. Yet the paper caused EPA to convene a special panel because it looked peer-reviewed.(2)

The ethics are no less suspect in the recent effort by Antoniou. He tried declare that he had no conflict of interest, yet the journal was not buying it. They instead admitted that Antoniou had literally gotten the money from the organic industry. “[Antoniou] raised the funding and supervised the study and the drafting of the manuscript,” the journal’s disclosures state. “This work was funded by the Sustainable Food Alliance (USA) whose support is gratefully acknowledged.”

The Sustainable Food Alliance is an organization founded as the Friends of the Soil Association (the U.K. organic industry association) with a mission to “educate the public about the positive health and environmental benefits of organic food and farming.”

Given that insight, Antoniou’s paper does just what they paid him to do.

Ethics are not the only reason to question the results. More reason to put this in the junk pile is the tiny sample size involved in the study. Antoniou’s hope was to find sets of identical twins in the UK that disagreed about organic food. That is, one would eat organic exclusively, and the other stuck to conventional food. Turns out, there weren’t many in an already small sample set of identical twins that were so gung-ho about organic that they went out of their way to avoid conventional food.

Once that idea was dropped, there was no point in using a dataset of twins for the research, particularly since the sample set was 93 percent female, aged between 50 and 75 years old - not at all representative of the general population.

Antoniou nevertheless pressed forward, attempting to associate pesticide residue in urine with bad health outcomes. This also failed. Neonicotinoids, a top target for the trial lawyers, were below the limit of detection. The technique used to detect glyphosate claimed higher precision, but the urine residue still fell below the level of quantization.

“Overall, no associations between pesticide residues and the composition of the urine metabolome were found,” the paper was forced to admit.

It would be fine if Antoniou had stopped there, but he didn’t.

Instead, the paper found another method to create a grand total of 34 “associations” among these mostly female British twins to cast aspersions on conventional fruits and vegetables. “Although consumption of fruit and vegetables has known health benefits,” the paper concluded, “we show that if conventionally grown this leads to higher ingestion of pesticides with unknown long-term health consequences.” In other words, something bad might happen. Or it might not.

All this exercise does is generate ominous headlines, which highlights the danger posed by activist scientists. Given the price of fruits and vegetables has already increased 8.5 percent compared to last year, many families are not able to afford fresh produce — let alone pay the premium for organic variants. If anything, scaring the public away from eating salads and strawberries is more likely to lead to an increase in consumption of junk food.

(1) He was even able to wrap himself in the flag of academic credibility but was fired from his corporate-funded role as an Adjunct at Washington State University when we revealed that his position was funded by industry.

(2) Hayes, for his part, refused to show any of his data, then or ever - he said EPA was colluding with pesticide companies against him. That lack of data has not stopped anti-science groups like Pesticide Action Network from flying him all over the place scaring elementary school kids about science.