Sushi Yes, Coffee And BPA No: The Science Behind When Pregnant Women Should Adopt The Precautionary Principle
By Hank Campbell | September 15th 2017 10:38 AM | Print | E-mail

Mothers have always been put upon culturally when it comes to how kids turn out. Though the physical costs of gestation are literally borne by mothers while fathers are basically done at conception(1), everyone feels they hav a say in telling expectant moms what to do.

- Society once insisted pregnant mothers not only to abstain from participating in sports but even abstain from watching sports. The excitement would be too much for the baby, women were told.

- Doctors also told women not to put their arms over their heads or the umbilical cord might get wrapped around the baby's neck.

- In the 1800's women bought maternity corsets; it's hard to even guess how uncomfortable that was for a pregnant mom. Child mortality and miscarriages were rampant. Imagine being told it happened because you didn't buy a corset or you hung the laundry. 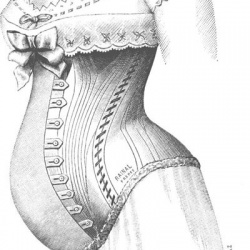 Though we have more evidence-based medicine now, and expectant mothers are lectured to less often by old men, (2) cultural stigmatization, primarily by environmental and cultural groups, remains the norm. Women are shamed into breastfeeding, even if it is difficult for the mother. Modern mothers are also told to be in a panic about everything because it is not just about you, dear, it is about the baby.

Given how successfully women propagated the species despite all kinds of health scares in the past, should modern mothers really be in a panic about eating a piece of sushi in 2017? Well, yeah, though they needn't worry about coffee or BPA, despite litigation groups like Center for Science in the Public Interest long insisting those things are ruining families.

Pregnancy Paranoia Is Not New

The great thinker Plato is recorded to have written in The Laws of Plato, that "children shouldn't be made in bodies saturated with drunkenness." Yes, a man was patronizing pregnant moms about how one drink was the same as fetal alcohol syndrome back in 400 BC. Today, women are told that not only must they abstain from alcohol, they should breastfeed for two solid years if they want to improve the chances of their kid getting into Stanford.

And moms shouldn't have coffee, peanut butter, aioli, sushi and a lot more, because there is a risk of miscarriage, Listeria, parasites, toxemia and lots of other things. The problem for new moms who want to separate health threats from health scares is that those groups are raking in a billion dollars per year terrifying the public about their kitchen or the air or a baby bottle. And most new parents are nervous about screwing up.

You can relax. Most of those claims are just made using correlation, that's why we often clarify the difference between absolute and relative risk (3), and why the United Nations IARC group looks so ridiculous saying bacon is as hazardous to health as plutonium and mustard gas. Like scaremongering, correlation has become a good business and some academics will want to take advantage of it.

A single press release by the Natural Resources Defense Council or Organic Consumers Association about a paper is likely to lead to an article in the New York Times or Mother Jones, and that looks good to university hiring committees. It's no surprise that correlation, which is simply a statistical association and once meant 'follow up with a real study', is now rushed to publication as if it was science on its own.(4)

Yet sometimes real science has answers about what to be concerned about and what is just equivalent to a manufactured Fred vom Saal "endocrine disruptor" scare, and it doesn't involve data-dredging or p-hacking, like the public was assaulted with on coffee and BPA and wine.

One real health threat is sushi. Pregnant women should adopt the precautionary principle on sushi because of the much higher risk of Listeria, which can cross the placental barrier and lead to a septic abortion. Yes, Japanese women eat it all of the time but that constant exposure is why it is less safe for Americans, the same way a dairy farmer may be fine drinking raw milk but your city children are being put at risk if you deny science.

In the early 20th Century, medical science didn't know anything could pass the placental barrier. The European sedative drug thalidomide, (5) which had an off-label nausea-reducing effect in women, was the first product clearly shown to cross the placental barrier between mom and child. Pregnancy can bring with it a reduced immune system, which results in being 10 times more likely to get Listeria. Sometimes the precautionary principle is smart, and sushi during pregnancy is one of those times.

(1) Mothers are even believed to determine child gender ratios, since fathers have long been thought to inseminate an equal proportion of X and Y sperm, making their involvement in the sex of a child truly random. That has been called into question, such as in Genetic Quality Of Fathers Influences Gender Of Offspring.

(2) So why is a man writing this and not his super-smart wife? To paraphrase her, "Half the Internet hates you, and I don't want them hating me too." She has a point. Debunking scaremongering, chemophobia, and hype is thankless that way. (4) It hasn't always been a bad thing. We obviously didn't do human experiments with cigarettes; we relied on epidemiology. That was the big win for epidemiology. Unfortunately, the win was so huge everyone is trying to duplicate it, so we get silly jury decisions like that baby powder is giving women cancer, or Erin Brockovich terrifying a utility into a $333M payout without waiting to see if cancer actually was higher in a town where chromium-6 in water was more than average.

(5) It was never approved in the United States. Then, as now, the U.S. was ahead of Europe and discovered its disastrous side effects in testing to get approval.