Sustainability Is Just A Fundraising Buzzword Until It Does These 4 Things
By Hank Campbell | March 8th 2021 01:39 PM | Print | E-mail

Hank Campbell
Is it more sustainable to have 2 billion people burning wood and dung for energy than to have centralized coal? Any objective look at the science says coal, while not perfect, is better for emissions, public health, and quality of life than individual fires but the U.S. government, guided by lobbyists, refused to provide World Bank funding for developing nations to create centralized energy - unless it was wind or solar.

All those countries could afford to maintain was coal. Instead of giving them centralized energy we put the sustainability buzzword as a mandate.

Nearly a billion people don't have safe water near their homes and the burden for carrying it, at 40 pounds each bucket, overwhelmingly falls on women and kids.

Western activists, overwhelmingly white and urban, don't have to think about that, but the rest of the planet is not like Manhattan.

A new paper advocates for a more sensitive approach for poor countries and women than Bill McKibben paying himself to talk about divesting from fossil fuels. They label the four parts of their strategy aggregation, compensation, learning, and contagion. 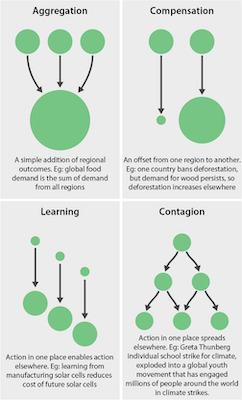 A new paper says that thinking locally about aggregation, compensation, learning, and contagion will create the global changes that social authoritarianism by rich countries has failed to accomplish. Image: McGill University

Some of this is obvious. Your notion of a desirable future may be different than mine or theirs. Running water and electricity would make a billion people happy. Creating a global standard in emissions has led to rampant misdirection and fraud; Pakistan has emissions going up but because they chose their standard to be going up less than if they had done nothing, they can claim they honored the Paris accord on climate. With energy it would mean heavy-handed approaches such as refusing to fund anything but solar, as we did in 2013.

Words are one thing, but what makes or breaks these things is implementation; in the past, the U.S. has told poor countries they can have running water or centralized energy - but they have to do it in line with the beliefs of the President of the moment. That is about politics, not people, so if we want a cleaner, healthier future we have to let local people be part of the process and not be told what to do by White Saviors. An expensive solar or wind installation is a fine energy adjunct for the rich but it is useless for the poor.

If the goal is to improve lives and the air, we can't demand perfection or they have to keep the status quo as a penalty.

That means groups who benefit from the status quo have to be moved out of the way, but those groups are not just petty types in those countries. They are right here in America impeding progress because it makes them money.
Science 2.0
More Articles All Articles
About