Hank Campbell
Do you think food is medicine? While Whole Foods imagery touted that in 2019, the coronavirus pandemic that began in Wuhan later that year punctured efforts to convince the public that health is a moral or economic issue - you owe it to your kids to buy overpriced food. SARS-CoV-2 and the COVID-19 pandemic showed that eating expensive onions won't save anyone from anything.

What may help save people is remembering the past rather than wishful thinking about the present. In this case, looking back at the 1918 Spanish flu pandemic which killed far more than COVID-19.

A new epidemiology paper uses statistical data in Michigan to create three or even four "waves" of that pandemic.

After the pandemic hit in March 1918, the assumption was that things had passed as weather warmed and there were fewer cases. But then a second spike hit in October 1918 as weather cooled and then Michigan banned public gatherings. Three weeks later, the cases went down and the ban was lifted, but in December another wave hit.

The ban did not stop the flu, it delayed it. 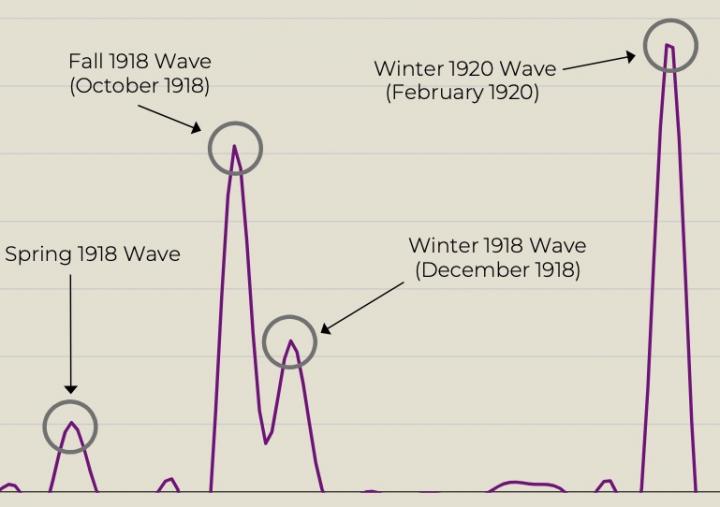 The four waves of the 1918 Spanish Flu pandemic in Michigan.March, October, December, and then a strange outlier in 1920. Graphic: Siddarth Chandra

The final wave may have occurred over a year later, in February of 1920. If history in Michigan is an indication, a final wave could hit the world (at least the world not denying they have it, like China) next year but with the benefit of hindsight, how we might we prevent that, or at least mitigate it?

First, it is unclear if that last wave was the same flu. Since detailed knowledge of the 1918 and 1920 patients themselves is not as well known as SARS-CoV-2 - by summer of 2020 there were over 9,000 papers about coronavirus, creating its own "infodemic" and a lot of confusion - it may not have been the same flu virus in 1920. Since there were no samples taken in 1918 that could be compared to 1920 it is impossible to know.

We do know they lacked a vaccine. While it is impossible to keep the country shut down for 18 more months based on what might happen in the future, we'll be better prepared either way. A vaccine won't be foolproof, no vaccine is, but it is the reason that we are unlikely to see a resurgence that Michigan may have had in 1920. Deaths from this pandemic are not going to come close to the 1918 Spanish flu pandemic or the 1950s Asian flu pandemic, thanks to science and medicine. We don't even really know how many died due to the 2003 and 2012 coronavirus pandemic because many cases were dismissed as other things, but 2019 changed that as well.

The one thing we will have for the future is information.
Science 2.0
More Articles All Articles
About