The Army Corps Of Engineers Wanted To Prevent Hurricane Katrina Devastation, Environmentalists Sued, Now They 're Doing It Again
By Hank Campbell | May 13th 2020 10:17 AM | Print | E-mail

Hank Campbell
Conservation groups have frequently sued the U.S Army Corps of Engineers claiming that government scientists do not "properly" evaluate the environmental impacts of its plans to mitigate flood risk.

They sued in the 1990s when the Army Corps of Engineers wanted to shore up the levees in the Mississippi Delta, because there was concern that a tropical storm or hurricane would overwhelm them. Since they had a friendly administration in power - a President who removed supplements from FDA control, banned nuclear research, and even gutted NASA - there was only token legal objection before the case was dropped. Six years later, the worst happened and Hurricane Katrina slammed the region just as the Army Corps of Engineers had worried about. Environmental groups, with their political opposition then in power, sued again, this time railing against the government that had put lives at risk by doing nothing to stop them from blocking the fixes Army Corps of Engineers had tried to make. Then even sued over the emergency trailers FEMA bought, claiming that trace levels of formaldehyde were killing the dogs of people living in them.

When you are an environmental lawyer, it is hard to lose, because you win in court or you win in the court of public opinion when the science you blocked fails to prevent a disaster scientists and engineers wanted to prevent, like levees collapsing. 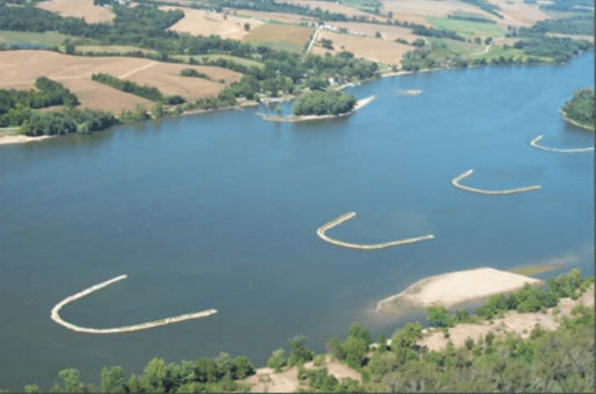 If you believe one of these can't harm any fish or birds but four of them are "bio-accumulating" to cause them to die off, you are either an environmentalist, an environmental lawyer, or someone for whom this picture is the closest they have ever gotten to a river.

The War On Science continues this week with a National Wildlife Federation cabal simultaneously pleading the alternatives that the region is at risk due to flooding (climate change!) but that the Army Corps of Engineers cannot be allowed to mitigate flood risk because it 'needs more study.'

This is a time-honored obstructionist technique. There is never enough 'study' for groups that profiteer from blocking studies. Weirdly, they invoke the pallid sturgeon, which proves they have no scientific clue. I am 100 percent certain that no one involved in this lawsuit has ever seen a pallid sturgeon. They have existed since the days of the dinosaurs, including when natives and then pioneers shaped rivers without any science at all. Pallied sturgeons survived for millions of years because they keep to themselves and can withstand a lot. Most scientists have never seen them, they are endangered because there have never been a lot of them and the rules for how environmental lawyers get species declared "endangered" are a joke.

The lawyers behind this new sue-and-settle gambit know the science has already proven the dikes, weirs, and chevrons have no negative impact so they took a page out of the "endocrine disruption" playbook and invoke a river version of "chemical cocktail" homeopathy. They cannot show that any of these dikes or weirs cause any harm at all to any species so they re-purposed "bio-accumulation" for their claim. While so single bend is ruining the lives of fish and birds if they are all added up then maybe some inflection point results and that needs more study ... well, it's nonsense. We can detect the gravitational impact that a fly has on the moon but we don't let environmentalists claim that a fly flapping their wings 200 times in a row causes a cumulative effect that will pull the moon out of orbit. That is similar to what they are doing here.

Yet with 94 District Courts in the U.S. environmentalists know where they can get a sympathetic reading, and they believe they have found it in the U.S. District Court for the Southern District of Illinois. Or else they would not have filed it there. Attorney Stephan C. Volker is a lawyer in Berkeley, which means they strategically picked a court even more opposed to science than they could find in San Francisco.

After Hurricane Katrina, there was no backlash against environmental groups that had blocked levee fixes. Instead, their political allies defended them, albeit in insulting fashion, asking 'why did you listen to them in the first place?' while making sure not to mention that the Clinton administration told the Army Corps of Engineers to settle the case.

But COVID-19 has brought a new awareness about useless obstacles to science. A recent paper tried to claim teflon causes celiac disease and a year ago that would have been on the front page of the New York Times, but now even editors at progressive newspapers want chemicals that work, food that is affordable, and energy that is not based on fickle cloud cover. Environmental groups are going to scramble for both funding and relevance in the post-coronavirus world so volume of cases - the 'throw everything at the wall' approach - will be needed more than ever.

River navigation is even less understood by environmentalists than farming in 2020 so expect lots more claims about "greedy" government scientists wanting less dredging as part of a corporate conspiracy - the same dredging that environmental lawyers in the 1970s claimed was bad for the rivers and sued to stop.
Science 2.0
More Articles All Articles
About