Hank Campbell
Imagine you hire a plumber and he needs to work on your plumbing and instead of coming over to fix that he sends his cousin who owns a lawn service.

That is analogous to what is happening at EPA regarding a common herbicide (the second most popular in the U.S.) named atrazine.

There is nothing wrong with it scientifically, it is causing no harm, but EPA is still going to hand it over to a group like the US Fish and Wildlife Services and let them just decide whether or not it might harm endangered species. No science needed.

They are even blaming it for extinctions that occurred nearly 50 years ago.

The Forever War on Science story has been in development...forever...but this is the first time they introduced time travel. 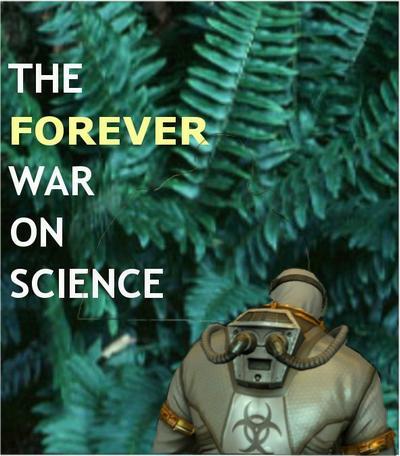 This is a strange new path for EPA. The Obama administration repaid favors for environmental sue-and-settle groups by making EPA "reassess" it not once, but twice. EPA scientists could find nothing wrong with it. Not to frogs, despite claims made (though showing no data) by activists like Professor Tyrone Hayes of Berkeley, not to any amphibians, not to people. Nothing. Its No Affect Level is instead orders of magnitude higher than is possible in the real world.

I wrote a comment because they are required by law to open comments. But they are also required by law to respond to comments and use high-quality science in their determinations. Which they have not done. By handing over chemicals to USFWS and National Marine Fisheries Service, they are saying that science will not matter to the Biden administration.

And the Biden administration should take great pains to avoid that stigma.

If after reading this you are convinced, you can leave a comment of your own.

There is a great deal on concern in the science and agriculture communities about the recent biological evaluation (BE) of atrazine and Science 2.0 would like to sum those up.

1. There were no ecological toxicity and exposure studies. Since this is the benchmark of regulatory approval this is confusing.

2. EPA's determination that they can abdicate their responsibility to the U.S. Fish and Wildlife and National Marine Fisheries Service is not a legal ruling and will likely be challenged in court. The Services have been shown in FOIA to be openly colluding with environmental lawyers to make rulings that they hope will fall under Chevron deference. They hire government contractors such as Industrial Economics, Inc, whose sole client is one of the Services, and those contractors are exempt from FOIA, so they never have to show their methodology for making rulings, they only need to show rows of data to independent investigators - including Excel spreadsheets without headers. See https://www.science20.com/hank_campbell/the_supreme_court_could_make_the...

3. The recent BE failed to obey its own quantitative weight of evidence guidelines.

4. EPA is required by law to respond to all public comments. This has not been done.

5. Though science studies were lacking, the recent claims that were included blamed atrazine for the extinction of the southern acornshell - in 1973. Though the Obama administration oddly had two extra science assessments after the herbicide was re-registered, they found no evidence of any extinctions. Instead, they reaffirmed that the NOELs were not only valid, but the real world usages were five orders of magnitude below levels that could cause any impact on amphibians, and no impact on humans. http://www.epa.gov/pesticides/reregistration/atrazine/atrazine_update.ht...

6. EPA is claiming that extinct species are “likely to be adversely affected” by atrazine.

The scientific implications are more concerning; by pushing decisions on crop protection products to Services that are not qualified to evaluate them, public trust in EPA will be eroded.

We ask that EPA revisit its ecological endpoints determinations using the most recent and best available data and a quantitative weight of evidence approach. High-quality studies should carry more weight than low-quality studies but in this BE they did not.