Hank Campbell
In the 16th century, it was shown by Paracelsus that 'the dose makes the poison' - too much medicine or anything else could kill while too little did nothing. In the 21st century activists have sought to dispel that. They claim homeopathic effects from chemicals at safe doses, endocrine distuption and u-shaped curves, but science knows better.

Even venom can be therapeutic if you are in the middle ground between no effect and poison. Researchers are identifying venom proteins that could help treat a variety of medical conditions. Some choose to remain in the realm of mysticism even if they have a valid effect. Traditional Chinese Medicine, for example, is the leading cause of endangered animal deaths and overall nonsense, but before real medicine was formalized it was known that some things did work, even if it was just at placebo levels. Venoms secreted by the skin glands of the Chinese toad Bufo bufo gargarizans have long been touted by folk medicine practitioners and researchers found that a long-studied compound in the venom, telocinobufagin, has effects in non-small-cell lung cancer in vitro and in vivo, by inhibiting the cell signaling protein STAT3. 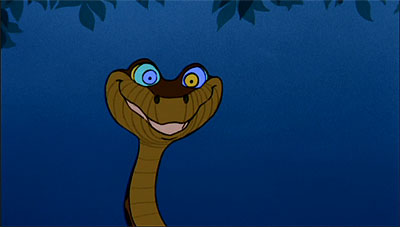 Kaa from Rudyard Kipling's "The Jungle Book" stories may soon help. Well, rock pythons or other snakes may help, he'll always be a jerk. This image ©Disney.

That doesn't mean it works in people. No drug or product can ever be approved based on cells in a dish and mice are also not tiny humans so the result remains exploratory, but it is worth follow-up if a company thinks it's valid. It's been studied extensively since the 1950s but no real medicine is built on it. That doesn't mean 2032 won't be the year it happens.

A mouse study - so again, only exploratory, despite what you may read in the New York Times on any given Tuesday - found that a peptide called visabron, similar to a snake venom protein, had therapeutic effects in the mouse version of multiple sclerosis. The goal of that is treatment with fewer side effects than existing medicines.

Mouse study or not, a new paper finding that a peptide engineered/based on the venom of Opisthacanthus madagascariensis - that's right, the highly toxic scorpion - can be tuned to kill multidrug-resistant bacteria is intriguing. While mice are not little people, they can only exclude effect or benefit and not prove it in humans, in some ways they are closer to us than other affordable animal models and when it comes to the cytoplasmic membrane their engineered peptide impacts, it looks like it could be a real win.

Venom gets a bad rap in culture - anyone on Twitter or who has listened to Amber Heard recordings with Johnny Depp knows how much venom exists - but it has done pretty well for science this year.
Science 2.0
More Articles All Articles
About